In my order, I mentioned "hey, I live in South Austin.  You don't need to ship.  I'm happy to come by and pick it up."  I got an email from Tim, and he invited me over.  I expected to grab the posters, shake his hand and go on my way, but Tim invited us in for a full tour and to chat for a while.

Firstly, some of you have seen my collection.  Some of you probably believe that I have a large collection (Jamie).  But one thing the internet has shown me is that I have a medium-sized collection when you begin to comparing it to some collectors out there.  Tim's collections blows all of those collections away by many times over.  It's a well-curated, extremely focused collection that is going to be impressive to some, but to us Superman fans, it was a sort of Super-Nirvana.

Tim's collection is a fascinating walk-through tour of Superman products from the past 75 years.  He had innumerable items I'd never heard of or seen in collector's manuals, online, etc... (including a collector's manual from 1988 I'd never heard of).  There are unique items and items with extremely limited release runs, overseas imports and extremely rare vintage toys and statues.  He had items signed by big name artists like Alex Ross, Neal Adams and George Perez.  Posters signed by the cast of Superman and Richard Donner.

So, Tim's job for the past two decades has been working conventions as seller but he's also been running conventions and handling talent.  It was interesting enough seeing all the signed items he has, but then you find out he used to work with folks such as Sarah Douglas, Margot Kidder, Brandon Routh, Noel Neill, Adam West, Marc McClure and others.  Margot Kidder has been over to his house and knew the kids.

Y'all, I may enjoy Superman, but Tim has found a way to live Superman.

I didn't take pictures because, sincerely, everything in there was worth photographing, so where do you start?

Well, I started with the cape worn by Christopher Reeve, maybe the most iconic of all the items in his collection. 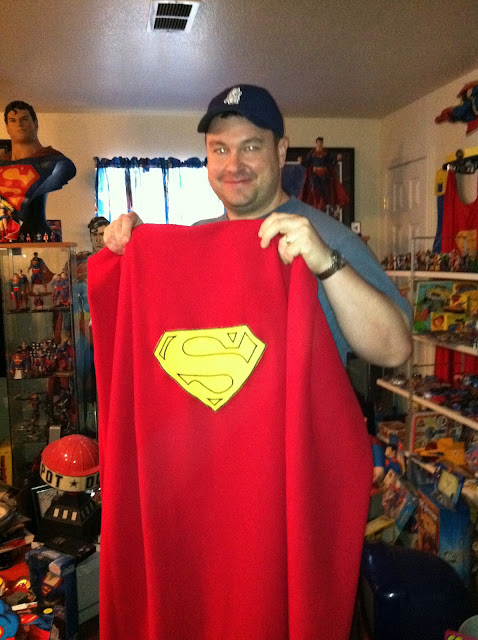 This was the only pic I took, so I hope you forgive me.

See, I have the "prop" cape you can see in the corner of the picture on the right, but my prop cape, no matter how peachy keen, is not part of the filmed Superman history, and it isn't signed by Christopher Reeve.

Tim's family just moved into their current house, and so his collection is in a bit of disarray as he figures out what to do with the stuff in a new space.  I've volunteered to come back down and help him organize and clean it when he's ready.  In the meantime, amazing vintage items are sitting on his desk next to the printer.

I just laughed as we were leaving because I thought it might be over-the-top to wear a Superman t-shirt to his house.  Not so much.  This guy makes Jimmy Olsen's Superman collectibles collection look puny and insignificant.
Posted by The League at 9/03/2012 12:43:00 PM

No, I do not forgive you for not taking more pictures. That is your job when you go back to organize. I can tell it must be pretty amazing, but I want the full effect.

We'll see. I think he'd be interested in having someone come in and shoot his collection, so I'm going to talk to Paul about it. I wasn't sure how invasive it would be to just take pictures of everything in his home and I would have wanted some context to the shots. We'll see!

if he doesn't mind you wearing your Superman gear, wear a cape when you help him organize his place, and do the old switcharoo with the Christoper Reeve cape.

Or you could do bowler hat stunt from the Thomas Crown Affair; invite 20 of your friends to his house to help, all of you wearing capes.

Well now that you know there's someone out there that you need to compete with, you better step it up a notch!