Well, it's Valentine's Day, and we're here to talk about the one thing we're an expert on:  ROMANCE.


Aside from my folks, I honestly think my earliest ideas about romance probably came from movies and cartoons, and, later, comics.  I mean, I remember watching Hart to Hart and thinking those two had a pretty ideal relationship, but I don't recall much from TV for adults that informed my ideas about how to actually pursue the ladies or what blossoming romance might look like.

The Leia/ Han relationship of Empire attempted to teach me a lot of things.

1.  Sometimes a bit of verbal combativeness is flirting
2.  Carrie Fischer looks great in a snowsuit
3.  You can find romance when stranded inside a giant spaceworm
4.  When you're ready to make your move, turn off the droids
5.  When it looks like all is lost and it's time to express how you really feel about each other, when she confesses in front of a bunch of strangers, that she loves you, always say "I know".  That shit is COOL.

As much as I appreciated Kirk using the Enterprise as his personal chick-magnet, he never really had an ongoing romance for more than episode or two, and maybe there's something to be learned from that.  Space Bros before Space Ladies.

I was always a little sad that Marion Ravenwood only appeared in one Indiana Jones movie, that is until recently.  She was the only leading lady who seemed like a good match (clearly, Willie Scott was not up to the task).

But, going back further, I do think the Superman movies did a good job of setting up the romance for a strange being from another world and a career gal in the big city.  Aside from Han and Leia, I think the pair I remember pulling for the most in movies from back in the day was Lois and Superman.  Despite all his, frankly, totally awesome powers, it seemed Clark Kent was no better around women than any of us, and could be jut as quickly and totally swept off his feet by a woman who isn't going to notice him until he drops a yacht in front of the police station.


And, since the first issue of Action Comics, Superman's romance of Lois Lane has been crucial to the story and character.  The movies picked up on this, and took the awkward fumbling of the comics of the 70's and turned the first two movies into, in many ways, a great romance that happens to involve runaway MX missiles and angry ex-cons.

You can tell that the movies are aimed at young men, though, as this doesn't end with Superman turning Lois into a Superperson (who turns out to be the best superperson ever), and they run off together.  This is no Stephanie Meyer illusion, no fantasy.

Nope, our Superman gives up a chance to live life with his lady as an Oxford-shirt wearing dude who gets beat up occasionally in truckstop.  He has to get his awesome powers and action suit back and go kick Phantom Zone butt.  This, of course, means they can never really be together. Like most teenage kid fantasies or Merchant Ivory films, the romance can never truly be, because to young men, nobly losing out on love (something young men feel they are doing all the time) makes saving the world all the more heroic.

While other superhero movies do end with a love interest in danger at the hands of a villain, usually directly (Darkman, Spider-Mans 1, 2 AND 3, Ghost Rider, etc...) Superman: The Movie is the only one in which the actual climax of the film is our hero doing something entirely for love.  Which, by the way, was a bit of a last-minute re-write.

But it also sets up how sad Superman II could be seen from a certain perspective.  He has it all in his grasp and he gives it all up because the stupid world needs saving.

No more smoochies for Superman.

In the comics, the writers of the past few years who had a crack at the books and who best understood the Lois and Superman relationship were probably Chris Roberson and Grant Morrison (with a special nod to Kurt Busiek).  Roberson made Superman's reuniting with Lois key to end run of the pre New 52 Superman, and, of course, Morrison gave us the great Superman romance, All Star Superman. 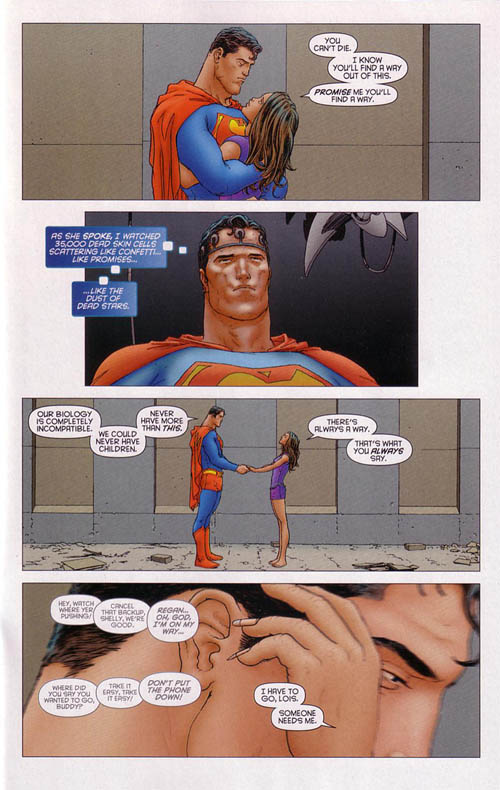 Morrison's portrayal, somewhat like the movies, is Superman writ large - romance on a scale beyond human, just like so much else about Superman.  And its lovely, even as he understands the sadness at the core of it.

Morrison and Frank Quitely gave me one of my favorite pages ever in comics, as from All Star #12.  The world is ending, the sun is dying, and all seems lost as Lois and Superman meet one last time on the streets of Metropolis.

You can read a lovely breakdown of the sequence here.


That, fellas, is how you make an exit with a lady.

So, here's to Superman and Lois and what it means to truly be star-crossed lovers in the crazy world of capes and tights, where love is as big as you imagine it to be in your dreamier moments.

Here's to Jamie, until the end of time.