I think I'd been reading Batman comics for all of a year when DC had the famous dial-in vote where readers got to choose whether or not Jason Todd, the second Robin, would die.  I was a Jason Todd fan, and I was also a kid just getting into comics, so I didn't want to see the character get it, but I was buying comics at the grocery store and book store back then, so any comics were catch-as-catch can.  Finding issues of A Death in the Family, the storyline where all this took place, were incredibly scarce, and only one of my friends got a copy. 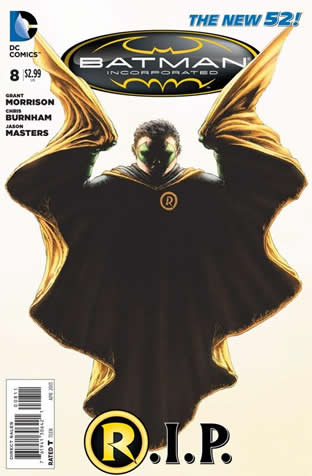 Long story short, I didn't get my hands on the comic with the phone number until months after the event when I sat on my pal's bed and read the comics of the storyline in one, long read while he and my brother listened to Van Halen albums.  I never got to cast my vote.  And as close as the vote was, I always wished I'd gotten my chance to save Jason Todd.*

Then, around 2004/2005, Stephanie Brown took Tim Drake's place as Robin just long enough to get fired for reasons and then get killed (only not really) by Black Mask.

And, of course, it never actually happened, but word on the street is that DC head honcho Dan Didio really wanted to kill off Nightwing at one point during Infinite Crisis.

A few years back Grant Morrison took over Batman and introduced Damian Wayne, the son of Bruce Wayne and Thalia al Ghul.  Right out of the box, Damian seemed fully realized as a character, and - unlike most modern new inventions of characters - was in no way an awkward teenager riddled with self-confidence issues nor a Mary Sue.  Pompous, brutal.  Desperately in need of approval from a father figure.  Everything you'd expect out of the grandson of Ra's al Ghul.

Morrison removed Bruce Wayne and put Dick Grayson in the cowl for over a year, during which time Damian put on the domino mask and the "R", and it was actually a great run on the Batbooks.  Bruce returned, as comic characters hurled through space/time/realities are want to do, and we've been able to enjoy Damian and Bruce as Robin and Batman for a while.


Well, the New 52 reboot and its condensed history of Batman may have left Gotham littered with just too many darn Robins.  When I was reading the mainline Batman books at the start of the New 52, I couldn't get my head around how and why DC would even want to have Dick, Jason (back from the dead - of course), Tim and Damian around.  It was clutter and a distraction.

You have to sort of remember that DC more or less did the "Five Years In" thing with the DC titles after Crisis on Infinite Earths, rebooting Superman with Man of Steel but after that series, everything was taking place a few years in (sound familiar).  Batman was similarly soft rebooted in Year One, but like the New 52, not all that much changed.  Dick Grayson remained a Teen Titan/ Nightwing and Jason Todd was Robin.  In all the ways that count, Batman hasn't really been refreshed much since appearing in 1939.  That's kind of wild.**

Now DC is telegraphing the death of Robin, as played by Damian Wayne, in major press outlets.  I'd feel like this is a spoiler, but it's a headline on Yahoo! News this evening.

After Marvel went on its "kill a name hero once a quarter" splurge for a while, I have a hard time seeing anyone outside of comic shops caring about the death of Robin, especially as he hasn't been part of the Batman concept overly much since Burt Ward and Adam West hung up their utility belts.  You sort of have to remind people that Chris O'Donnell put on a rubber suit in those two final Batman installments - in no small part because that was a full-grown Robin.

DC has done a lot to lose my trust over the past ten years.  Bringing back Jason Todd was, narratively, a mistake and the sign of what sort of editorial decisions DC would embrace in the ensuing years.  I'd argue that even now, lo these many years later, DC still hasn't quite got down what they want out of the character other than to keep pointing at the character and going "pretty cool, huh?"***

It's Morrison, so who really knows what he's got planned?  Damian probably will die, but will he die metaphorically?  Will he turn into a concept that is imagined away?  Will he become a series of symbols that forever spread Batman across time and space?  We'll have to see.

Sooner or later, someone will want to bring back Damian, and at that point, I'll be not picking up that comic.

Now, if DC would just kill off Jason Todd again, or make it so he was never here, I might start finding my path to reconciliation.

*Wikipedia says the vote tallies were 5343 for Jason to die and 5271 for Jason to live.  I can see myself placing more than one vote back in the day.
**The DCU reboots of Superman seem like an odd way of trying to keep Superman from ever actually just getting to be Superman again.  I give it a shorter 5-7 years this time before they're back to the familiar mode of Superman from the late Silver Age.
***I am sorry people I have seen on the internet who love Jason Todd, you are wrong.  And one day, when you're older and wiser, you will nod at my sagacity and know that you, somehow, failed a crucial test of comics-ness
Posted by The League at 2/25/2013 09:05:00 PM

As I mentioned in my email to you this is just a dumb sales stunt. You would think that people would be getting immune to this stuff by now. I guess by putting it in the NY Post DC is hoping the rubes will run out and buy a copy of Batman Inc 8 cause Robin dies. Too bad they aren't aware that this is actually Robin 4 or 5, I can't even keep track anymore. So this is actually the third time a Robin will die and both of the previous deaths have been reversed so there is no reason to think this one won't be too.

I think that it was ridiculous for there have been 4 Robin's in that 5 year time frame as well. I guess DC has caught on to that as well as I understand that Tim Drake was never Robin, he just went straight to Red Robin.

I would be okay with this if it worked along with a subplot of the Joker becoming the Iranian ambassador to the U.N.

Oh, I have it! The "R.I.P." means that Robin will become part of The Ripping Friends! Well, one can hope, anyway.

@matt - I would pay so much for a comic where DC had the nuts to make Joker the Iranian ambassador again. I thought that was cray-cray when I was 12.

@simon - the Jason Todd fake out was one of those things that, you think you want to eat a mountain of Rocky Road, but then, when you get two bites in, you realize "this isn't going to work. Will anyone notice if I just dump this somewhere?"

@Ryan - yeah, I literally had not thought about it in a long time. Writing it down forced me to realize how dumb it was. The stupidity is only compounded by the way in which Jason was brought back from the dead. Superboy Prime punching a wall for those of you who've forgotten.

You'd think when they did the DC reboot they'd be able to get rid of that but nope.

I am the one person who actually just sort of laughed and rolled with the idea of Superboy Prime punching the walls of reality. It's such a weird, outlandish idea, but it's also so, so DC Comics. If we can have LAzarus Pits, green rings powered by willpower, Amazon women on an island somewhere in the Atlantic, New Gods and bottle cities, I am totally okay with a transdimensional Superboy punching at the walls of reality to cause continuity problems.

It so didn't compute for me. They could have just left it with the Al'Ghul's dropped him in the Lazarus Pit to revive him and use him against Batman.

Was the "Hush" storyline where they brought Jason Todd back? Or was that just one of many? Sorry, I'm not up on my Robin lore.

@simon ... now I don't know why they didn't just Lazarus Pit him. That's just stupid, then.

@jake - yeah, in "Hush" Clayface posed as a returned Jason Todd in a move that really made no sense. It was Hush playing mindgames with Batman. Anyway, people freaked out about the idea to such a degree that DC decided "well, now we HAVE to do it!". So, around 2005, he showed up again.