The point of owning a comics company, one would assume, is to publish comics.  But that's not how it works.

Since the 1970's, DC Comics has been owner by Time-Warner.  After buying itself back in the 90's (it was owned by New World Entertainment, I believe, in the 1980's) and going public on the stock exchange when I was in college, Marvel is now part of the expanding Disney empire.

I would assume the reason Disney wanted Marvel had far more to do with the opportunity provided by The Avengers franchise as cash-generating IP for movies, toys, t-shirts, etc... than it was actually interested in the comics themselves.  And, of course, by owning Marvel, they have the opportunity to grab back lucrative properties like Spider-Man when the contract runs out with Fox.

DC's purchase by WB was almost more of a happy accident.  They were part of a mass of companies purchased by Time-Warner, but, certainly the opportunity to exploit Batman, Superman and Wonder Woman had to be seen as a welcome opportunity.  And, of course, their own Warner Bros. studios would have first-look deals on all movies.

But we're talking movies and not comics.  Comics have always been high risk/ low reward for everyone but the company that can spin the character off into a familiar object for licensing.  Frankly, until recent history, I don't know that Time-Warner or Warner Bros. studios knew or cared that they owned a whole comics company.  They cared that they owned Superman and Wonder Woman.

With Disney's acquisition of Marvel, I'd hoped to have seen Marvel figure out how to revive the Disney Comics line that gemstone had struggled with, but Boom! seemed to have really understood.  However, two years later and the only Disney comics coming out have been a Toy Story comic at Marvel and the excellent collected editions of Disney material at Fantagraphics, a completely separate entity.  The Fantagraphics connection seems to predate the Marvel/ Disney merger, so it's not that surprising, but I would guess whomever cares about the Barks material at Disney has little to complain about given the gold star treatment Fantagraphics has lavished on the reprints.  But those comics are clearly aimed at us adult collectors.

In short, comics for kids seems a dead concept at Marvel, which might make sense in the world of direct market only comics.  While I don't know if Marvel is in any way involved, I was delighted to see Comixology has brought up a growing Disney store.  Lots and lots of options to share with the kids if you don't mind getting peanut butter on your tablet.    Now, you just have to deal with the guilt of knowing Disney's contract practices for comics are stuck in the 1970's and the creators of this material aren't getting paid.

While it's a major win for IDW, I do find it almost shocking to read that fellow mega-corporation Time-Warner, parent company to DC Comics and Cartoon Network, has let IDW snag the license to the Cartoon Network characters when it comes to translating those characters to comics. 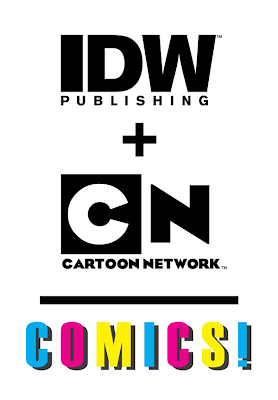 The story at Comics Alliance.

There appear to have been divisions between DC Entertainment and Cartoon Network for a while, if you ever followed the mysterious history of cancellation of perfectly good shows on CN featuring the DCU heroes - most recently the somewhat abrupt hiatus for DC Nation, the return of the block with the simultaneous announcement that the two shows you were enjoying were now cancelled, so, you know, go jump in a lake.

The story, as I understand it - but I don't really know - is that Cartoon Network doesn't benefit tremendously from the licensing opportunities they'd get from, say, The Powerpuff Girls - something that isn't wrapped up with a separate organization like DC, that wants that revenue, too, and has it's own licensing deals.  Young Justice launched a toyline that didn't seem to go anywhere, and Green Lantern never got a toyline, which may be due to the movie-related stuff collecting on shelves for way too long.

I'm not sure how or why the IDW deal got struck with Cartoon Network, but it doesn't do anything to make me believe Diane Nelson and the honchos of animation and Cartoon Network are seeing eye-to-eye these days.  While I don't know if DC told CN that they were too small for their current plans, hiring the competition seems a bit like a "who needs you?" from CN.

While DC seems focused on mostly developing a line of books that feels like a series of variations on an awkward sixteen year old's idea of "bad-ass", they've really let their youth oriented comics and materials whither on the vine.  Their licensed materials - from toys to kid's chapter books - have come from multiple publishers and no consistency over the past three years to shore up Superman, Batman and Wonder Woman as kid-oriented IP on the scale of Spidey or Iron Man (or, if the t-shirts I see on kids is any indication, Cap).  Let alone a consistent look for even Superman.

Anyway, it's not THAT interesting, but it is something.  And if sales of My Little Pony and Adventure Time comics are any indication, not to mention the kids who grew up on Powerpuff Girls, et al, getting a chance to relive their nostalgia in comics form, I'm not sure DC didn't sort of drop the ball on this one.
Posted by The League at 2/26/2013 11:08:00 PM

The My Little Pony comic is awesome. I read it to my daughter replete with me doing funny voices. I've heard great things about Adventure Time comic as well. Seems like comics based off of licensed properties have come a long way since I was a kid.

This actually looks like a good move for both CN and IDW.