Signal Watches: The Americans (that Commie Spy Show on FX)

This is how I know I'm getting older.  Time has marched on enough that the scary people of whom we lived in fear during my formative years are protagonists on a new TV show.

FX's new hour-long drama, The Americans, follows the adventures of two KGB sleeper agents in the US at the dawn of the Reagan administration.  The Commies are the protagonists and Ronald Reagan is the looming specter of a heightened state of intensity as (we used to say) the cold war heats up.  We also have a federal agent living across the street from our Commie-heroes, the clammy bureaucracy of the Kremlin, and the rich pageant of life left behind in Mother Russia to contend with. 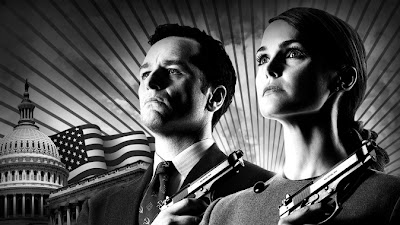 Movies and TV have taken various stabs at turning the traditional antagonist into the protagonist since Little Cesar pondered how this is how he ended.  Once we dropped the Hayes Code and adopted a rating system that didn't require a moral lesson at the end (ie: the Bonnie & Clyde ending for our protagonist and a realization that crime ends in a premature death and misery), we've explored bad-guy-ness in the movies.  And, of course, Sopranos broke the mold for TV, giving a weekly view and building sympathy for a mob family.  These days, of course, Breaking Bad gives us the drug manufacturers' perspective.


The Americans swaps mobsters for embedded spies and cops as antagonists for FBI agents rooting out nests of spies.  The show asks the viewer to understand and sympathize with people working against our own national interest, and it's an interesting take to get an imagined Russian view of what events looked like from their side as Reagan began throwing money hand over fist at missile shields, etc...

The show is a study in irony as, of course, we know how this plays out by the time Reagan leaves office and while my focus in 1981 was far from international relations, I'm old enough to have my own memories of Glasnost and the fall of the Berlin Wall (something not even predicted in science fiction).  You can score one for The Gipper, and I'm not here to argue the details of what the @#$% happened between 1981 and 1990, but it's going to be an interesting show if it remains tied to real-time, real-life events, and the characters continue to comment on the unfolding history.

The show stars Keri Russell and Matthew Rhys as Elizabeth and Phillip Jennings (well, that's the name they go by and insist they call one another by, so as to ensure they remain in their roles as Americans).  Their flipside counterpart, FBI Agent Stan Beeman is played by "hey, that guy!" actor Noah Emmerich, who is every bit as good as Russell and Rhys.

I don't want to give up too much of the plot.  The first few episodes are available on my Time-Warner InDemand service, so we're catching up, and I'll add it to my DVR.

The show is an after 9:00 PM show on FX, so the rails are off on the usual TV rules regarding sex and violence.  From the get-go, we're asked to re-think how the marriage of the leads as a partnership as Russell seduces a DC politico in the first scene (seriously, no spoilers there.) and it sets the stage for the complicated relationship and extremely stressful life the Jennings are leading.  I mean, if you want to feel bad for a dirty commie spy.

The production quality of the show is okay. They certainly struggle with the hair, costumes, sets, etc... from 1981.  It certainly isn't the immersive experience of watching Mad Men where you never doubt the year, and sometimes it's small things like someone sporting a carefully clipped goatee, which people really didn't have until around the late 90's or so.  And while the kids aren't there to steal focus, what they are focusing on feels a bit off, like it's not quite right for social mores (or even what was in for kids of the era) of 1981.  It's just sort of flawed that way.

I've only seen two episodes and I think only three have aired, but FX is consistently putting on shows that I either think are okay but not for me, shows I think are pretty good that I do watch, and Justified, which I haven't seen but everyone's been on my case to watch it.

Still, the plotting and acting is all so far spot on, and pretty much in my wheelhouse.  And, it features John Boy from The Waltons as a career FBI Agent.  So, how can you go wrong?

I am concerned that the show will start strong and veer into soap opera or lose the excellence of the pilot as the show moves along and loses focus.  Even by the second episode, the terrific use of period music had vanished (best. use of "Tusk". ever.).  We'll have to see.

Hm. Hadn't heard of this one, but it sounds interesting. I'll be curious to watch it. Maybe it'll pop up on Hulu.