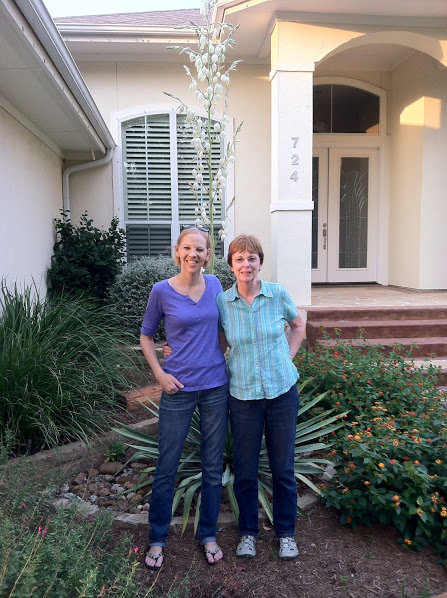 I remember less about that initial meeting than when, just a couple of months later, I spent several days of that first Winter Break at Jamie's folks' house in Lawton.  The primary activity I was assigned seemed to be sitting on a stool in the kitchen and chatting with Judy and Jamie while they made McBride family favorites.  And I quite liked Judy immediately.

Judy was well educated, a voracious reader, and, with Dick, a world traveler.  Their most recent trips as of last summer were to Cuba and Australia, but they'd been to Tonga, the Easter Islands, Antarctica, the Galapagos, all over Europe, and into parts of Africa.  She was also extremely clever, and in a household where comedy is a premium, she kept up with everybody.

In the years after that first Winter Break, Judy became an enabler of my Superman habit, from making me my official McBride family stocking with a Superman "S" in the pattern, to, most recently, surprising me on my birthday with a prized Superman/ Muhammed Ali statue...  unlike almost anyone else might have, Judy never batted an eye at the son-in-law's idiosyncrasies.  And it didn't hurt that we were both fans of Wonder Woman.

I didn't grow up knowing anything about baseball, and so she also taught me about half of what I know about the rules of the sport while we watched Cubs games and she let me ask a lot of questions.  When it came to Southwestern Conference and then Big 12 sports, she, Jamie, Dick and I all had our opinions of football and sometimes about basketball.

Really, though, I got to know Judy during an innumerable number of lengthy hospital trips for Jamie both before and after we married.  Soon after Jamie and I began seeing one another, Jamie fell particularly ill, and Judy flew down and I drove in from Austin (Jamie was in school in San Antonio), and we tag-teamed on Jamie's days and nights until she was released.  After that, we partnered in monitoring Jamie's health on a day to day basis when she was out of the hospital, and shared duties of spending time with her when she was checked in.

Frankly, there's not much to do in the hospital aside from watch re-runs of Bonanza (and the occasional Cubs game), and so we talked between the three of us, or, when Jamie was asleep, between the two of us.

I was a kind of goofy kid, so it took a leap of faith for Judy to put some trust in me with her only daughter, and I never forgot that privilege, and have always done what I can to make sure I lived up to the trust placed in me.  And, I can't remember Judy ever getting a call and not being out of Lawton and on the first flight down.

Somehow, and this amazes me, we never really disagreed about matters around Jamie's health, or much of anything, when we could have easily fallen into the petty family disputes you hear about.  But maybe navigating the difficult waters of Jamie's health was simply too big for us not to pull together.  It required teamwork and collaboration.  And so, with Dick and Doug (and, eventually, Kristen), we rallied, and the emotional toll of those hospital visits never seemed that high in the end.

When I watch sitcoms or movies and there's a stock storyline about a nightmare of a mother-in-law, I mean, I guess I've always known those people and relationships exist.  But that was never my experience.  Certainly I was not always seen as charming, and I don't want to give the appearance that we never disagreed.  We did.  People do, but, frankly, I can't remember anything specific.

We had the past four years of having Judy and Dick close by (but not in "pop in" range), and Jamie always had the opportunity to see her folks during the week and Judy would come up on Thursdays for a mother-daughter day.  We also had lovely (and often very specific) holiday traditions, and the past few years, the proximity made a nice Saturday or Sunday visit easy to do.

Judy and Dick had become extremely invested in San Marcos, and participated in numerous conservation activities as Master Naturalists.  They've been been involved in trail building, working on Aquarena Springs and at the San Marcos Nature Center, to name a few activities.  They've also been avid birders for years.

After her first episode in August, Judy lost her ability to read much more than a few words at a time, and much of what had been the status quo changed.  Roles were reversed, and Jamie began visiting San Marcos on Thursdays, and, while she was diminished in some respects, it was still Judy.  I didn't enjoy my time with her any less, even if some of the nature of conversations had changed.  She still had opinions about OU football.

I've known Judy my entire adult life, and in the months to come, all the things she did and and all the ways she was a part of our lives are going to show themselves in places where we could point to and say "yeah, Judy took care of that" or the things we'll see and know she would have loved or laughed about.

But there's a lot of Judy in both Jamie and Doug, and part of why Jamie is the person I wanted to spend my life with and why my brother-in-law is counted among my closest friends and how I can think of Dick as a second father - I know where I can trace that back to.

As much as losing Judy bothers me, the memorial and the photos Dick shared and the memories folks shared weren't upsetting or distressing.  It was all a reminder of how genuinely bright and funny and giving Judy was to the room full of people who could make it.  And that room was packed.

So, while I know a tough year stands ahead as we pass through seasons and holidays for the first time without Judy, every one of those milestones will go by with a story and that's how we can remember her and keep her here with us.

Very,very nice. A great tribute to a wonderful woman.