Here's a Random Thing I Did: Glenn Miller Orchestra in Austin

Lately a coffeehouse not so far from my house expanded into the next retail space over and opened the Strange Brew Lounge.  Jason pointed out the new venue to me, and a few weeks back I was driving to work and noticed they claimed they had the Glenn Miller Orchestra coming.

You might find yourself saying: "But, The League, Glenn Miller died in 1944!"
Indeed he did.

But the orchestra played on!

The Glenn Miller Orchestra still plays around the country, with an all new line-up that probably refreshes quite frequently as they're on the road 48 weeks per year.

My pal Julia said she was interested, so we got us a pair of tickets, and we attended the 6:00 PM show.  (Seriously, they started promptly at 6:00.  It was crazy town.).

The venue is pretty great.  It's really intended for the singer/ songwriter scene Austin cultivates, but apparently the uncle of the owners of Strange Brew was once did arrangements for the Glenn Miller Orchestra, and so they decided to take a risk and book the band.


You'll notice in the pictures a big sign that says "Silence".  Well, I noticed when I moved back to Austin in 2006 that, apparently, it became okay to talk throughout concerts in Austin these days  Or, anyway, that's what the kids think they can do.

Yes, they are totally fine with applause, etc...  and for a bunch of septuagenarians, that audience got rowdy!

I didn't grow up with Glenn Miller on the stereo, and I'm no aficionado of Big Band music.  But I figure: if you're going to see a big band, you could do a lot worse than seeing one of the bands that's most identified with the genre.

Big Band had faded as the go-to popular music by the 1950's, but it still had some serious traction until the time the Lawrence Welk show went off the air.

Well, apparently the very small old man sitting next to me used to manage bands in New York back in the day and he knew Glenn Miller, which was... weird.  But, man, was he having a blast.

When we first walked in, I did have the unique experience of being one of the youngest people in the room at a concert in Austin, but eventually a few people with kids in tow showed up ruining my status as the upstart whipper-snapper. 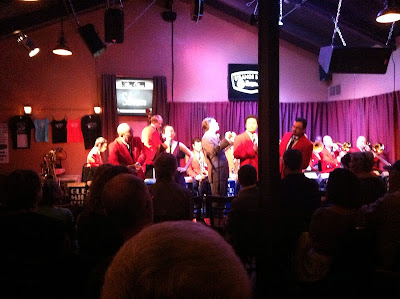 In some ways, the show was a lot like going out to see jazz (something I did once upon a time when I must have been a lot more fun and ten times cooler).

A lot of it's about the showmanship and soloing of the musicians, all the while working with all those musicians in the band.  They played some of the big hits, including stuff like "Chattanooga Choo-Choo" and what even I knew was a Glenn Miller mainstay, "Moonlight Serenade", but they also played a lot of material that was new to me.

It's hard to explain how weird it was to actually be in the room (and a small room) with a big band.  You see them in movies and on TV, and you listen to them on CD or whatever, but to see people actually playing that way was remarkable.  And that's not to mention how they'd really retained the quality of the sound from the original concept, if movie soundtracks are to be believed.

And that included the vocals of both the band leader and the female vocalist, you nailed the quality of the 1940's-era chanteuse. 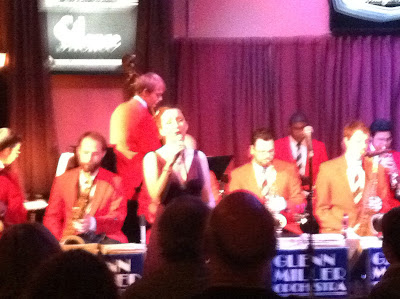 The set lasted about an hour and a half, and was the early-bird-special sit-down set.  The second set was the show where they were clearing the chairs for dancing, and if they come back, I'm going to that show.

Anyway, some terrific musicianship in a style you hear a lot, but which really isn't performed out at all. 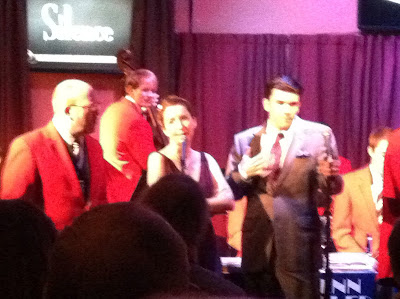 I guess everyone involved from the coffee shop and from the band was a little surprised by the response, because the owners were already promising us they'd bring them back and maybe try for a regular Big Band Night at the coffee shop as we were packing it in. 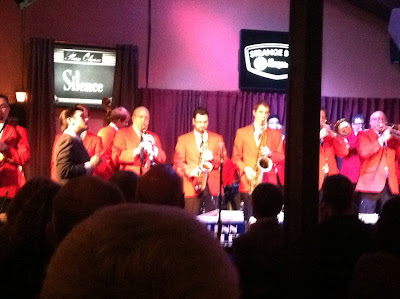 Anyway, check them out of they come to your area.  And, as they ARE on the road 48 weeks per year, they likely will be in your area at some point.

And, by the way, I am always a little embarrassed these days when they ask Veterans to stand up and get recognition.  Especially in an older crowd like this one.  Like, half the crowd stood up, men and women...  but from my generation?  You'd get a much, much smaller turn out.

In Austin, you can listen to a local radio station that plays big band music on Sundays. They start at 2pm (I think - I don't tune in there until 2 because Jamaican Gold plays until 2 on KOOP) on 91.3 FM, and it goes on for a while.

Man, I dropped KO-OP off my dial a while back because I never listened to them while driving. I need to start giving them a chance again, especially as KUTX on Sundays is not my bag.

Hey, thanks, I just saw this. We had a great time performing at this venue, it seriously was a blast and totally different from the types of venues we normally play (theaters, auditoriums) where we are quite separated from the audience. FYI, the second show was a really different vibe, lots of young people and dancing, awesome!

WOW! Hello, Ms. Burns! Thanks so much for dropping in. I think my friends here in Austin are a little tired of me telling them about this show, and how we're all going next time you're here.

The Strange Brew owners posted a message about their ideas for how to use the best results of both shows, so we'll see what happens when you're back.

Again, thanks for stopping by this site. Your vocals knocked my socks off!