Carmine Infantino Races into The Infinite

Reports are coming out that Carmine Infantino, original artist of the Silver Age Flash comics - and so, so many other comics - has passed. 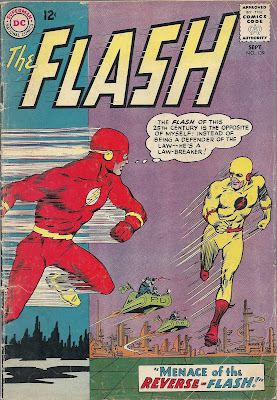 If you can, pick up the Flash Chronicles books or the Showcase Presents: The Flash collections.  It's not just the stories that are great (and they are), but it's Infantino's visualizations of Barry Allen's powers brought to life, managing the panel-by-panel aspect of comics to keep the reader on pace with Barry when necessary and coming up with other techniques - like the "many Flashes in a single panel" technique that was even spoofed in an early episode of The Big Bang Theory.

He drew the original Gorilla Grodd, Dr. Alchemy, Trickster and so many others.  I guess what I'm saying is that I really love those Carmine Infantino Flash comics.

Infantino also handled Batman, Star Wars and other properties as an artist.

Infantino would become an editor at DC and later a Publisher, ushering in significant change, and, essentially, The Bronze Age at DC comics.  He was clearly unafraid to take risks, and much of the creative energy unleashed during the era was shepherded under his watch.

The Showcase collections are really wonderful. Infantino has left a great legacy.

Coincidentally, this weeks ish of Dial H is a Flash crossover!