Roger Ebert Merges with The Infinite 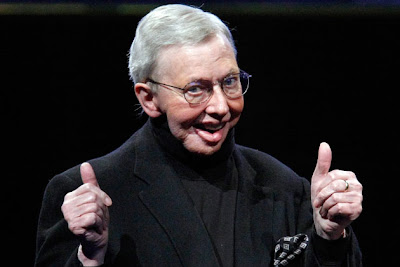 As co-worker Kristi said "he and Siskel had the last, old school intelligent criticism show on TV".  I agree.  Even after Siskel passed and Ebert had to take a side-line role on At the Movies after he'd grown ill, I liked the various folks who were on, but I really missed the original formula.  Smart, tweedy guys taking an art form seriously.  Back when studios were arguably trying to participate in film as an art form and less as a commercial product.

Ebert found the internet, and as recently as a few days ago he was online, blogging, talking about how he'd been ill again, but that he and his wife, Chaz, were planning new ventures and what was to come for his film festival in Chicago.  He was massively influential online, straying from movies and into politics and sociology.

I liked Ebert most of my life, but the past few years I came to respect the hell out of the man who wasn't just confined to giving movies a thumbs-up or down, who had a wide ranging field of interest, who had become somehow more verbose once stripped of his voice, and whose decades of reviews were available online for me to consider.

We lost Gene Siskel too soon when he passed more than a decade ago, and we lost Ebert just as he was really getting his engines humming for his career's second act.

His website is still up, and hopefully his team of critics is still out there doing their jobs.

I always looked forward to watching Siskel & Ebert back then. Their show was the first of its kind and they had great chemistry. Youtube has a bunch of their reviews.

Ebert was an excellent writer, and his reviews were always entertaining and insightful. Of all the movie critics, I generally found myself in agreement with him more than the others. He never seemed cynical, condescending or overly snarky like so many of his colleagues.

I think he got very political over the last ten years. Nothing wrong with that, but he's accused others (Michael Medved, off the top of my head)of letting their politics influence their reviews. I couldn't believe Ebert said that since he did that all the time. He's the most overtly political movie critic I know of. Go back and read his review of An Inconvenient Truth.

In any case, you have to respect the way he kept on going through cancer; working right 'til the end. Sad to see him go.

I'm not familiar directly with Medved's reviews, but... yeah, Ebert hasn't been shy about his stances. That's, uh... well, I mean there's a way to try to remain neutral and see things from the character's point of view, but, anyway... given his recent editorializing, I'm not sure Ebert was the best spokesman for political neutrality in much of anything.