I think i figured out who Phil Spector was while I was in high school and had subscriptions to Spin and Rolling Stone.  He got name-dropped a lot, but it was in college that I figured out what The Wall of Sound was, and identified it with Darlene Love, The Crystals, The Ronettes, et al.  I'm no music aficionado, but I know what I like, and I was and am a Spector fan.

Recently, HBO aired a film by writer-director David Mamet, a movie based on speculation around the Lana Clarkson murder. 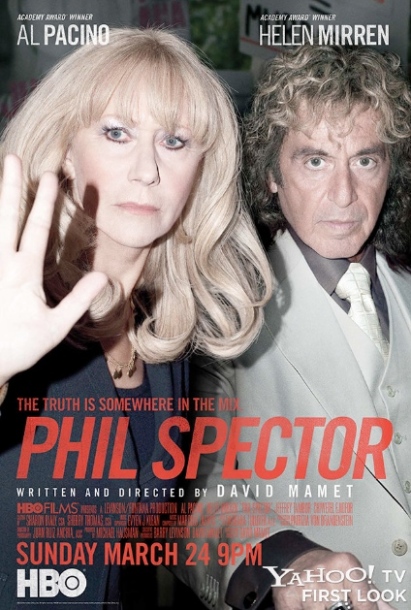 Of one thing I am certain: David Mamet is a much, much smarter person than me, but he can write a script that I can keep up with while still surprising me with what he sees in characters and situations, both micro and macrocosmic.  And whether his script hews to reality or not is irrelevant.  What's on trial here is less about Phil Spector, but 20 years of celebrity cases, of what it means to have reasonable doubt in the make believe world of Los Angeles and show business.  And, of course, the masses who pass judgment knowingly from watching snippets of news or seeing headlines in their RSS readers.

If you're an adult and you don't have a complicated relationship with a musician, artists, actor, writer, etc... due to what you loved about their work first, and what they did that landed them in the courtroom or in the court of public opinion, you are a rare individual, indeed.  Or else you carefully avoid the news.  Long before he was charged with murder, I was  fan of Spector.  I still listen to Back to Mono in my car or a few tunes from The Ronettes and The Crystals.  I haven't tossed out my Phil Spector box set because he committed a heinous crime, but I never play a Spector song without thinking about the trial and the sideshow surrounding it.

Phil Spector is convicted of murdering a beautiful but aging B-movie actress.  I can say that I knew enough about Spector that when I read the headline, I thought "well, he finally snapped".  And maybe he did and maybe he didn't.

Helen Mirren plays a defense attorney called in by Bruce Cutler, played by Jeffrey Tambor, to defend Spector.  Al Pacino is able to control himself and throttle his energy enough to make you forget he's Al Pacino, even if, honestly I have no idea what Phil Spector acts like in real life.  But at least I never felt like Pacino was phoning it in as I've felt for the past ten years or so.

Mamet is still a playwright at heart, and he dresses his sets intentionally, with representation superseding naturalism to good effect.  The rented office for the defense is littered with unlikely props and blow-ups of portraits of the victim watching from behind.  Rehearsals for questioning are held on spare soundstages.  Mamet's dialog, maybe spiritually closest to Aaron Sorkin on one of Sorkin's very, very good days, manages to remain more natural that Sorkin, even when he's got his characters in a rapid-fire patter.  And there's always more going on than the exhausting intellectual brinksmanship of a Sorkin script.

This is, after all, the guy who did Glengarry Glenn Ross.

Heck, let's do this. One of my favorite scenes in any movie (NSFW):

We've got some lawyers out there, and a lot of music fans.  A lot of movie fans, too.  It's a pretty good combo of all these things, especially if you also watch with morbid interest as icons go through their own Sunset Boulevard meltdowns in real life and on a routine basis, and you puzzle over the why's and wherefore's.

It doesn't even matter whether any of what Mamet shows is true.  I don't know.  I know enough about Spector's background to know that Mamet wasn't creating anything from whole cloth.  But in putting together the combination of the isolation that comes with fame, faded fame of varying flavors, of money-chasing Hollywood attorneys, of nostalgia, of our own fascination and ability to play judge, jury and executioner in our minds as media consumers...  it's an interesting movie, and worth a viewing sometime.  Perhaps not award worthy, but interesting.

And, if you haven't familiarized yourself with Phil Spector's catalog as one of the greatest music producers of all time, do so before you refamiliarize yourself with the case either through Wikipedia or the movie.  But it's hard to get past "He Hit Me (and It Felt Like a Kiss)" without feeling like you got a bit of insight into Spector's worldview.

I very much enjoy Mamet, although I suspect he is one of those writers who can't bring himself to cut the turns of phrase he finds the most clever. Who was it that said that writers must learn to "kill their darlings"? I don't think Mamet does that, and he, like Sorkin, is so well established that few will stand up to them to suggest they cut a line. I watched THE SPANISH PRISONER and HEIST again recently, and there were lines of dialogue which made the final cut which just seemed awkward and weird. (Many of them were assigned to Ricky Jay.). You can almost picture Mamet, writing the script, smiling at the witty remark, but on set, it just didn't quite work.

I am of two minds on the topic. I can either embrace the quirks and idiosyncrasies that make me say "oh, this is so clearly Mamet dialog", or I can wish that he'd knock off the edges that make the work so clearly Mamet. It's a fine line as I'd hate to lose what he brings to the page with getting it watered down to sound like John J. Screenwriter put the thing together.

But sometimes... sometimes you need to let someone tell you when you've passed into affectations.