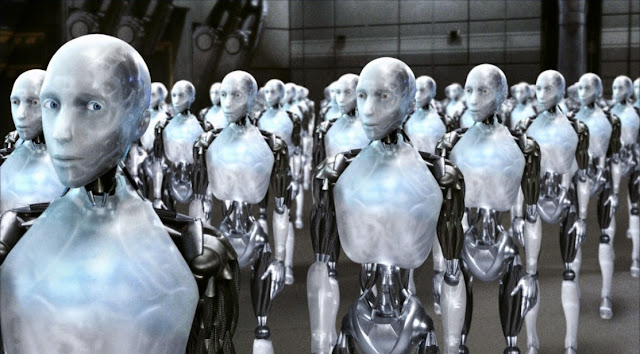 In some ways, the movie is a new story based in the world of Asimov's US Robotics and with robot psychologist Dr. Susan Calvin, a recurring character in the stories of I, Robot, who appears in multiple stories at different points in the character's fictional lifetime.

Like the book, the movie is concerned with both the breakdown of the 3 Laws that govern most robot behavior flawlessly and seamlessly throughout the culture described in the book, but every once in a while a logical loop or glitch occurs, and the book explores the idea - often with Susan Calvin involved.

The biggest problems with the movie are that it's very clearly had Will Smith's script approval, and that it was intended to make $200 million, back when that seemed like a lot of money for a movie.  It's an odd snapshot of the evolution in what it meant to be a big summer tentpole movie in 2004, somewhere between the horrendously predictable meathead films of the 90's (see: the work of Michael Bay and/ or Con-Air) and the modern era where nobody seems to know what will stick and Jesse Eisenberg is getting leading-man roles as a magician.*

The movie is the first of an era that sort of acknowledged how predictable movies had gotten and plays a bit with that, but is still a locked room mystery with four potential suspects, two of whom you kind of figure didn't do it, and the third so obvious that he did it, it leaves only really the fourth.

Smith, as always, plays the Will Smith character we all got to know in Independence Day and which he's made progressively grumpier over the years, culminating in I Am Legend.  The movie goes way out of its way to let the audience of 2004 work through their technophobia and look at all this robot stuff as basically magic by giving us a Will Smith who seems like a guy from 2002 dropped into the future where robot and AI technology has become seamlessly integrated into everyday life.  Now he's a COP.  Who thinks robots are BAD.  And is given a back story that in no way ties to his erratic behavior around robots, and - when its finally revealed - makes no sense whatsoever.

Calvin, played by Bridget Moynahan (and looking not a lick how I imagined Calvin, but whatever... I don't know that Asimov ever described her), is the egg head scientist who is repeatedly asked to explain it "in English, Doc".  You know, for the maroons in the audience who can't understand words like "electric" and "brain".  And is a pretty good reminder of why people get angry at scientists in the real world.  She knows stuff and refuses to just be as big of a meathead as Will Smith (and, worse, isn't impressed by his gritty coolness).

The robots of the movie are actually really well designed, and it's amazing to realize CGI from 2004 holds up pretty well.  I'm not sure that's a design people would actually respond to in the real world (I tend to think even humanoid robots won't sell if they fall into the uncanny valley).

What's hard to buy is the "robots can't break!" line of logic that turns into a nigh-religious belief, even when events don't add up quite right.  I get that we need our hero to come up against a wall, but I also assume a mysterious death of the era's Steve Jobs figure wouldn't just get swept under the rug because there was a product launch on the docket (and that nobody found it odd that his house was levelled 24 hours after he died?  With everything inside the house?).

There is an interrogation scene with Smith and a suspect robot, and it's pretty decent stuff.  I suspect it's the core of what sold folks on the idea of the movie.  It's worth seeing to watch Smith get out-acted by a CGI robot, but it is the closest to one of the Asimov short stories of any particular part of the movie.  And, the ending does reflect one of the Susan Calvin stories I do recall, but I believe it was from the book Robot Dreams.**

There are elements of what I suspect could have been an interesting Asimov-esque robot movie, but once Akiva Goldsman got attached as a writer, Will Smith as a lead and someone cast Shia LeBeef as a street-wise bit of local color, you were headed for a kind of genericized sci-fi actioner that was going to treat the concepts of Asimov's hard sci-fi like nerds in math class and just copy Asimov's homework.  It's too bad.  At the same time, it means one day I may get my Caves of Steel movie and nobody will mistake it for a Will Smith vehicle.

*I tip my hat to the producers of Now You See Me.  That a movie starring Jesse Eisenberg as a super-charismatic popular magician and master thief is a major summer release and someone believes it's going to make money at all demonstrates a level of confidence I dream of possessing.  Or else someone has a Producers-like scam at work.

**spoiler - in which Calvin meets a robot dreams of standing before a thousand robots and declares "let my people go!".  Calvin immediately disintegrates the robot.
Posted by The League at 5/25/2013 04:15:00 PM