This episode on the DVD set includes a voice over commentary with Jack Larson (Jimmy Olsen) and Neill as Lois.  In the manner of so many commentaries, you sort of expect them to start talking about what they had for lunch or something they saw on the way to recording the voice over.  They're just sort of chatting over the episode and its clearly a favorite for both of them.

The episode is a bit higher budget and reflects the Season 2 (1952) change in tone from noir-esque crime stories to threats more similar to the comics.  A giant meteor is headed for Earth and Superman has disappeared.  Clark Kent appears and has amnesia - forgetting he is Superman.

It's a really good episode and oddly more tense and with a lot more at stake than most of the show's installments.  Larson has a good time talking about how the reason they don't recognize a glasses-less Clark as Superman was explained to them that if they did, they'd get fired from the show. 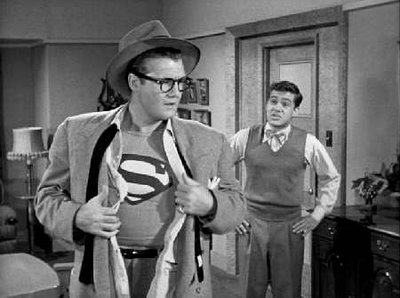 Anyway, "Panic in the Sky" will also be the name of my first solo album.