The relationship America had with movie stars was a bit different back in the day.  For actors like Myrna Loy and William Powell, I suspect the pair were considered a bit like to-flight sitcom talent from the 90's.  And as the concept of episodic stories at the time were confined to the radio and matinee serials, outside of the Thin Man series (which, if you've never watched them pour yourself a whiskey and enjoy), the two were paired repeatedly due to their chemistry, but as new characters in new settings. 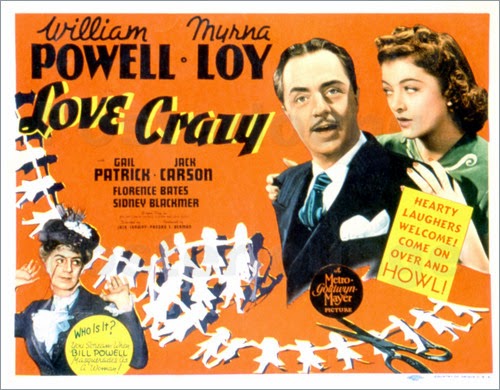 Love Crazy (1941) was the fifth movie in a Loy/ Powell box set Paul gifted me a while back, and one I'd somehow just forgotten to watch.  It's comfort food from jump, a movie for folks who'd been fans of Loy and Powell since before The Thin Man would cement their place in cinema history.


The premise - the day a couple is celebrating their fourth anniversary, Powell learns an ex-flame is now living in the apartment below.  An ex-flame it seems he had a pretty good time with back in the day.  A wacky set of circumstances leads to he and Loy's planned romantic evening going to pot, and the never-quite-resolved question of what Powell was up to with the ex-flame when Loy is forced to leave for a while.  Loy files for divorce, and Powell determines that she can't divorce him (for five years) if the court believes he's suffering from insanity.

I will say, my favorite parts of the movie were Powell cutting loose after deciding he needs to feign madness and floating top hats in a pond and Loy in court trying to explain her husband always acts this way when he's feeling a little goofy.

At this point, the movie takes a turn as we get a very 1940's idea of mental illness as a zany enterprise and proving one's sanity as a bit of a catch-22.  The movie isn't going to win any awards for it's compassionate view of mental illness or it's nuanced understanding of psychiatry, and it's only through the same lens you have to apply to a lot of movies from the era (the same one that applies to race relations, gender issues, etc...) that you're going to make it through.  Through that lens, sure, it's a pretty swell, non-threatening movie you'd forget about a week after seeing it.  But, sometimes we can also look at popular entertainment from an era and learn a hell of a lot about what people accepted as normal at the time.  Bear in mind, this is a full 20 years prior to Shock Corridor telling a very different story of another sane man in a mental institution.

There's a bit of a romantic triangle as Loy finds romance with a burly archer, and we get to see Powell made up as his own sister (see the poster above).  It's all quite wacky.

The resolution of the movie is a bit, uh... unresolved.  I'm not entirely clear what happened.  Powell, unable to prove his sanity, flees the mental hospital and is accused of attempted murder by an hysterical doctor.  Rather than resolve that issue,  I think that the pair fall in love again and run off to Saskatchewan.  And what movie shouldn't end that way?

Hm. At first I thought: How have I not seen this? But the more I read, I think maybe I have. My deep, abiding affection for this pairing probably makes it so. But! Time for a re-watch when you can't recall. :)

even as I was watching it, I was thinking "I am not going to remember this movie in a month". It's pretty darn fluffy. Enjoyable, but...