I plan to catch up on a few episodes on the new Thomas Lennon/ Matthew Perry starring The Odd Couple TV series reboot*, and I realized that - while I'm familiar with the general idea, I have never seen the movie in its entirety (and I am not going to rewatch all of the Tony Randall/ Jack Klugman series).  The movie is currently streaming on Netflix, so I gave it a whirl. 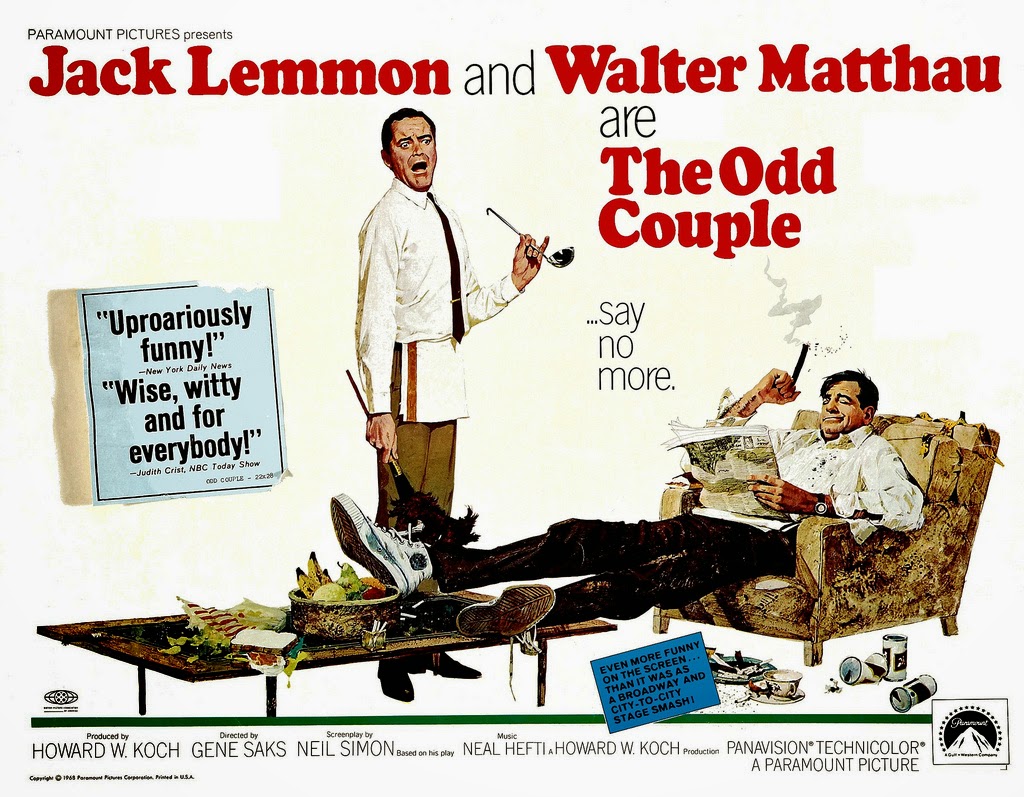 Now, that's not to say I haven't seen large chunks of the movie, and, in fact, in 8th grade I actually did a fairly lengthy scene from the original play for my final in the drama class I took that semester.  I think I was Oscar, but I don't actually remember.  I mostly remember having to act like I was on a date at a time when talking to girls made me start sweating like a pig.

After just watching Love Crazy, I didn't really go out of my way to a watch a second movie about divorce a day later, but I guess I better watch Kramer v Kramer tomorrow.  But it is interesting to see that the social stigma around divorce was changed by the time The Odd Couple (1968) was playing theaters, versus the "oh, the shame!" aspect of it in Love Crazy from 27 years prior.

I'm doubly surprised that I hadn't seen the 1968 movie because I genuinely really enjoy both Jack Lemmon and Walter Matthau, and it's kind of like saying you like McCartney and Lennon's solo work, but you never listened to "Revolver".  Here, both are in top form, and swing between hilarious and maddening and pathetic in ways that I am sure community theater has been royally butchering for four decades now.


It turns out, I had only missed about 30 minutes of the total movie, having caught bits of it on cable and remembering the Pigeon Sisters scene from when I did it, but, as always, its nice to actually understand what's happening a whole lot better when you're pushing 40 rather than trying to make sense of the scenario when you're 14.

If you aren't aware, The Odd Couple is about the neurotic and fastidious Felix Unger (Lemmon) getting taken in by his slovenly pal Oscar Madison (Matthau) on the night he's finally been kicked out by his wife.  The two try to make it work, but what drove their spouses crazy about each of them before their respective divorces starts to get on the nerves of the other, especially Oscar, who had kind of gotten used to his new lifestyle which Felix is upending.  Unlike how the TV show played it (to the best of my recollection), in the original here, Felix is a bit oblivious to Oscar's reaction to his cleaning and house keeping, rather than it being a give-and-take between the two's worse angels.

It's a story about 20th Century men cast adrift and having to figure out why the people they care about cut them loose, and the slow realization that you may be absolutely maddening.  Or at least that's my read as I project myself onto the movie.  And, of course, tolerance and love are good things but we also need to maybe change a little to make a life.

All that said, the movie does show it's age and the the time of its creation with how divorce plays out for the characters, especially, frankly, the pat resolution for Felix after 2 hours of build-up.   It feels very much like a Broadway show, something to send your folks to with a little bit of an edge, but where they can walk out feeling okay afterwards.  But the relationships with the women we never see are certainly an artifact of women not having a career, men disappearing for all night poker games when they have kids to tuck in, etc... which all seems fairly common from the era but lends a certain undercurrent that I don't think was ever intended.

But the men in the movie do care about one another, they worry a lot about Felix, but not so much about Oscar when his slovenliness now reads as less "man on his own" and more as a sign of depression.  Which, perhaps, Simon always believed to be true, but in the Jack Klugman era, it was just seen as "oh, he's the sloppy one".

Anyway, absolutely worth checking off the list.  It's genuinely funny, helped along by Matthau and Lemmon's perfection in the roles, and more than a just an artifact.  There's a reason we keep returning to these two characters.