Ever since I was a kid, I'd be meaning to watch the 1985 movie, The Bride, but was first told it was "too adult" or something, and later, "it's not very good".  And, you know, that second one is far more correct than the first rationale for skipping this film.  But between my interest in the Frankenstein story in general and because the movie Bride of Frankenstein is easily in my top 5 or 10 movies (especially when paired with Frankenstein itself, for a neat, under 3 hour package), I figured that if I could watch Christmas Vacation over and over, I could make time for a movie I hadn't seen.

If our trend this week is about failed marriages, we can twist that idea a bit to include how the doctor lost his lady friend, Jennifer Beals. 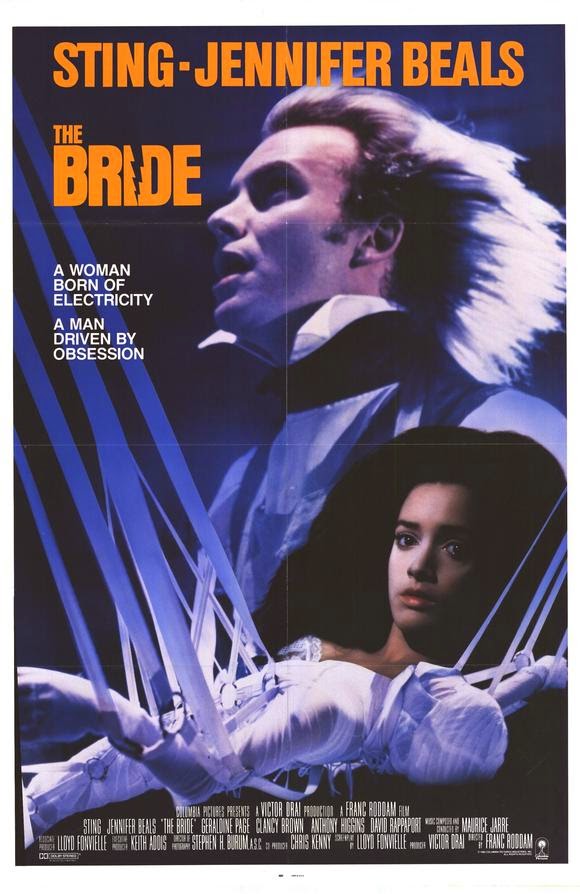 The movie features a fascinatingly 1980's cast, probably meaningless to the kids today, but you Gen X'ers and post Gen X'ers will probably at least raise an eyebrow.  Cast as Doctor Frankenstein (who I don't know ever receives a first name in this version) is former rocker/ current adult contemporary wunderkind, Sting, who was transitioning as the Police collapsed for the fifteenth time and as he made a stab at an acting career in some offbeat movies during the era (like Dune!).  As the titular Bride/ Eva, the movie casts Flashdance star Jennifer Beals, most likely as she and Elsa Lanchester are both the proud owners of gigantic, dark eyes, lots of hair and striking features.  Not too distant from his role in The Highlander as the Cossack, Clancy Brown plays Viktor/ The Monster (yeah, artistic license), but well before he became Mr. Crabs of SpongeBob fame.  And, David Rappaport, who you'll recognize from Time Bandits, plays a new character, Rinaldo the dwarf, a guy who befriends the monster as he wanders in the woods and helps him realize personhood.  And, a young Cary Elwes shows up, all fresh faced and prettier than everyone in the room.

The movie seems basically and utterly unfamiliar with the novel, and only seems to have a passing knowledge of the movies as well.  But it's also not an homage to those movies, except when it is, such as the heavily borrowed birth of The Bride, which winds up Bride of Frankenstein - complete with a pretty good laboratory set.  That scene is more or less prelude in this movie, but here we kill off our erstwhile Dr. Pretorious and Karl, not as part of the inevitable catastrophe, but so we don't have any witnesses or anyone for Frankenstein to discuss his creation with and maybe give the doctor something to do.  In our scenario, we've scrubbed the subtext of the Bride as child of Pretorious and Frankenstein in their quasi-romantic relationship, and rather than run off with Elizabeth in the final scene (we have no Elizabeth, no family unlike in both movie and book), and so the good doctor runs off with his creation at the time of the disaster (in fairness, he has just realized he has his own Jennifer Beals, so who could blame him?).

From there, the movie splits in two, one thread following the doctor's transformation of kind-of-nude Jennifer Beals from a primal state to a lady of grace who can meet with a countess and hold her own and the monster travelling with his little person pal cross country and joining a circus where he learns about the duplicity of circus folk.


I made a statement aloud to Jamie that the film feels shockingly like modern fan-fiction.  It changes key elements for no real reason, ignores source material to tell it's own story, makes a Mary Sue out of the only real female presence, seems to miss key points of the original works (both the novel and the movie, which is vastly different from the novel), and insists on a mundane, domestic fate as the happy/ only logical conclusion to characters who traditionally wound up otherwise.  In many ways, one of the hallmarks of fan-fiction (to me) is that the affection for the characters gets translated into over simplifying character struggles to make them easier to deal with or giving characters happy/ romantic lives that are often a tonal whiplash to the source material.

Absolutely you get that in this movie, taking the horror of the events of Frankenstein and Bride of Frankenstein (again, let's not drag the novel into this) and turning it into a "all the boys are competing for the girl" story, a blunt-instrument Pygmalion fantasy with a conclusion placing a humanized Bride and Monster on a late afternoon gondola ride in Venice (spoilers).

I mean, what the ever-living-@#$%?  In a movie that wants to pick up where Bride of Frankenstein leaves off, with a slightly different outcome and the non-existence of Elizabeth, it also seems to forget about the hermit in the cabin, the angry townsfolk, and pretty much everything else in the prior movies that would have interrupted this being an entirely made up thing someone wanted to exist for some reason.  That's not to mention the movie sort of waving hands and hoping to Jeebus you don't remember what the book or two prior films were actually about.

There are certainly 1980's art film and grown-up film pretentions from set design to costuming to the concept of the movie as a "what if?" for a character who, in the, book, never actually gets assembled, but torn apart and destroyed before she's brought to life, and who, in the original film, gets a scant few minutes of screentime in which she hisses and yowls, a confused creature.  The monster gets the name "Viktor", and, as I said, I don't think Frankenstein gets a real first name, because WHO IS THE REAL MONSTER, WINK WINK? (sigh).  Even the treatment of the circus as a proving ground for Rinaldo and Viktor has a "I can see exactly where this is going" vibe to it from the time Rinaldo says he wants to join a circus (circuses are a horror show in movies).  Whatever the filmmakers felt they were bringing to the idea that was "new" winds up just feeling like the characters you know moving through scenes from something else done better elsewhere.

There's also a curious insertion of a psychic link between Bride and Monster that is clumsily established and forgotten about until Viktor needs to Hulk Out and be an action hero.

As mentioned, the movie turns into a "who gets the girl?" scenario as The Bride suffers two (TWO!) failed rape attempts in about an hour, and the ending feels a bit like it was written by a suit at the studio who wanted action somewhere, dammit!  But there's also some poor character development and explanation - the good doctor actually gets quite heated when his friend suggest he knock boots with The Bride, whom the doctor is selling as his ward.  And you actually kind of buy it.  He's basically dealing with a child, intellectually.  But then he isn't - but there's no showing of the growth from one to the other, just...  sudden jealousy when he thinks Cary Elwes is about to make off with his Jennifer Beals.  I dunno, it's there, it's just not very well executed.


I can't say I'm a Frankenstein completionist, as I have no idea what that would even mean, and it's going to take a particularly whimsical mood for me to finally take on I, Frankenstein.  But as far as a pastiche or an interpretation, it's actually probably mid-range.  Clancy Brown and Rappaport are enjoyable, Beals is...  Beals, with an accent that comes and goes.  And Sting is at his best when he's just staring off into the distance.

I will also say, this is not the plodding art house film I thought I was getting into, which would have also been a pygmalion fantasy of the highest order, but I thought it was basically going to be Sting's slow evolution of The Bride and more nuanced scenes at balls and large dinners with ladies in tall wigs, all leading up to the eventual dissolution of the relationship.  Frankly, I didn't even know the monster would be in at all.  So, it did have better pacing than i figured it would have and was not a Merchant Ivory film with a reanimated corpse as a protagonist as I figured, but it also wasn't exactly knocking my socks off with the intellectual complexity of the film.