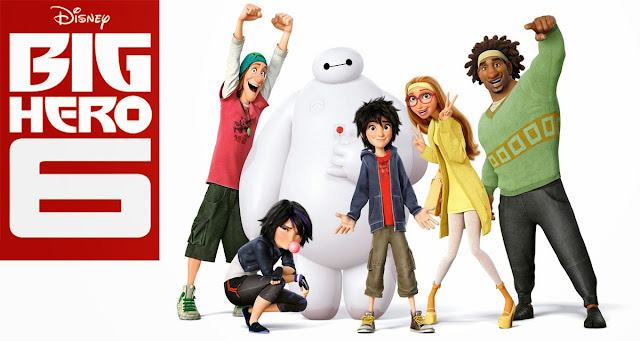 We missed this for whatever reason when it hit theaters.  Kind of wish I hadn't because it looks like they were really thinking in terms of 3D projection that my very 2D television did not replicate.

Big Hero 6 is maybe the flipped opposite of what DC has been doing with their heroes, and while I am aware the movie did okay ($222 million domestic is impressive, and a total of $652 million internationally is great) I don't think it slipped into the zeitgeist in quite the way it might have.  But I also don't hang around little kids all that much.  So, parents, correct me.

But this is superheroing for the all-ages set in a very good way.

Sure, in many ways, this a movie that took a LOT of shortcuts when it came to telling a team story.  But after just watching Avengers and Avengers: My Dinner With Ultron, maybe that's a compelling decision if you want solid character development and focus.  It was the story of Hiro and Baymax, and we get absolutely no background or motivation for 3 of our 6 heroes.  But, you know, they do have distinct personalities, there is a complete story in here with multiple threads.

The story takes place in the fictional mash-up town of San Frantokyo, a beautifully realized mash-up of Japanese architecture, urban features and landmarks templated onto modern San Francisco that has stunning visual appeal throughout the movie and, frankly, I'm surprised I haven't heard about more on the interwebs.

Our hero, Hiro, is a young genius.  At 13, he graduated high school and is now slumming around town, participating in back-alley Robot Wars-style battles for money.  Just after sparking Hiro's interest in joining him at university in a hi-tech engineering and research department, the brother dies in a fire, Hiro loses the technology he was working on for entrance, and he seeps into depression until his brother's project, Baymax, springs to life.  Baymax is an inflatable healthcare robot with a heart of gold (Disney!).  The pair come across a nefarious scheme with ties to Hiro and his brother and Hiro teams up with his brother's mad-genius student buddies to deploy their projects as super powers and save the day.

This is based on a Marvel comic I only recall from a listing in a solicitation from what must have been a decade ago.  I never read it, so...  someone else will need to tell me how it stacks up.

There's probably something cynical you could say about the immediate weaponization of any new technology, especially right out of the lab, but the movie deals with the issue on two levels.  1) None of the heroes are out to hurt anyone, and 2) the movie actually deals with that idea directly when the question is raised.  I was impressed how well they folded that notion right back into the story.

The movie also takes on grief at passing - something Disney movies have often deployed, but here it's dealt with for more than a scene.  While, yes, the passing of Hiro's brother is his motivation for going heroing, there's also a strong sense of actual heroism in the movie, of superhero not as militarized tactical living weapon, but as technologically advanced front-line first-responder, and at it's heart, that's where Baymax's role as a healthcare/ care robot fills in where the worse angels of human nature might not.

There's so much great design in the movie from the 3D cartooning of the characters with distinct features, expressions and movement, to the actual design of the superhero suits, color palettes and the near stop-motion effect of the mini-bots at work.  While I think the credits ran for fifteen minutes to list all the names of the animation and technical crews, holy cats, was every bit of that on screen.

The "hero" characters seemed very well thought out, and in a way, I kind of appreciated that the "powers" each of the characters wound up with were not necessarily a direct reflection so much of their personality so much as an end-product of their research - which was, perhaps, in turn, a character decision, but not exactly on the nose.  And, really, the villain/s had surprisingly human motivations.  This is no Cruella de Ville, who's just a b for the sake of being a b, or a Gaston who just can't stand the competition.

I had a few story quibbles here and there, such as - Hiro kind of proves he doesn't actually need the university at all by developing the mini-bot matrix - and Disney's sometimes off-balance sense of what consists of a joke or gag in dialog (Fred's introduction is awful.  The "invisible sandwich bit was weird), but all-in-all, this movie has already been added to the list of "must show the nephew when he's five years-old" movies.

It's infiltrated the zeitgeist in stealth mode. We just took Shayera to Big Hero themed birthday for one of her classmates a couple of months ago. And the line to meet Baymax at Disney Studios was pretty long. I think this will build more until the inevitable Incredibles crossover. Which I wouldn't mind seeing, actually.

Well, that's actually good to hear. I'm glad to hear the kids are enjoying this movie. And I would love to see a live action Baymax. We'll have to see about that crossover. It makes sense on paper.