There were a lot of crazy stories going around as fans speculated how Mad Men might end.   I will never understand why Mad Men was one of the most curiously misunderstood television programs to ever air, but at least the folks watching it for all the wrong reasons provided enough eyes on the show that it lasted longer than it might have, otherwise, and without becoming one of those shows that seems to live on, shuffling about, no longer certain when it should have ended, but certainly positive it no longer needs to be on the air. 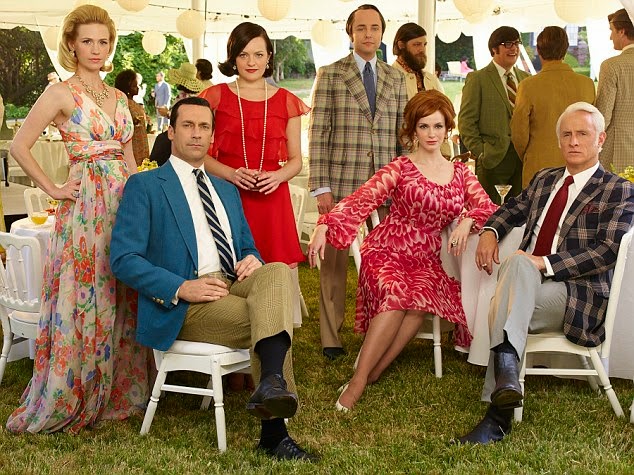 My pal Matt came over to watch with us (he, his ladyfriend Nicole, and the illustrious JuanD have been Team Mad Men at our place for years now), and said "here are the two endings I heard people saying were possible".  One was that DB Cooper thing that circulated the past couple of years and which I think Mad Men was well aware of as it went into the final episodes.   The other, curiously, was exactly what happened.

I had no preference, and as I don't particularly enjoy coming up with my own ideas for how things should play out, one thing I've always enjoyed about Mad Men was that I rarely guessed anything ahead of time about the program.*   Some shows like Parks n' Rec can make a gag out of ending the show and give everyone saccharine endings, but I think if you were going into the final season of Mad Men expecting everyone to wind up just fine, you haven't really been watching that show very closely.   Nor was the show Breaking Bad, where there was only ever one real conclusion from the the half-way point of the first season.


My read on that final scene of the show is the cynical one John Hamm seems aware of, but shrugs off.**  After so much time with the character, I can't read it any other way (I also recommend this article in the New Yorker, which I felt myself nodding along with).    In season after season, we saw Don trying to better himself, and maybe he has become a better person in the year that follows that last scene with the cross-legged "om".  It seems hardly possible he could let anyone else down more or been shut out more than he has been by the important people in his life.   But he has realized what he is and he's back with his Carousel moment to share with the world, maybe not nostalgia for the kids singing on the hill, but nostalgia felt by the audience and maybe a ripping sensation as the reality of the ad snaps into focus.

I'm fine with the endings for all the characters.  I don't want to say "I don't care", but it was never about anyone meeting my expectations.  Peggy was going to try to master the ad world, Joan found a path where she could own her own world, Roger enters into another doomed romance but he appears to be enjoying himself.  And Pete...  weirdly, the guy who was a jerk about wanting it all seemed to get it, at least partially by disappearing from New York and the shadow of his family.***

There's no sense of balance or karma or just rewards as the show ends.  In it's way, it just went dark.  Don's wrestling with "Who is Don Draper?" is answered, it seems, and so that's where they draw the line.  I'm not sure seeing Peggy mill about at McCann for another ten years would necessarily be good TV, no matter how sharp the writing.  She was the kid on the learning curve, and she's past that now.  Joan was about realization of talent, and she's done that.  Pete the spoiled child growing up.  Betty and Sally, the painful trading of roles of reluctant caretaker.  Goddammit, if anything broke me up during that show, it was poor Sally in all her scenes.

Roger was about me realizing I, too, would probably drink vermouth in the office, I believe.

I am going to miss the hell out of the show, but I would be deeply unhappy if they'd stretched it further just for profit (see: every show from the 90's).  And I feel extremely lucky to have been along for the ride.

We'll see what comes along next.  Something.  It's not the alternatives AMC has tried to pitch, that much is certain.  I do plan to rewatch the show in its entirety, which I only ever usually do with superhero cartoon shows or things with George Reeves or Lynda Carter.

Like a lot of other folks, I initially showed up for period details and (let's be honest) Christina Hendricks.  I don't think I was ever shy about that fact.  But, hey, I'm not one to turn down a decent TV program when it's thrown at me.  As Gerry pointed out, the show has been handled as a long-form novel, eschewing television convention for character development.  At the end of the day, that's what the show really only ever had.  It was never going to be a plot-driven program about advertising development, or a frothy soap.  Or one of the many shows with aspirations for more that, let's be honest, just can't handle but turn into one or the other.****

So long, Mad Men.  It was good while it lasted.  Here's to hoping all of those fine people find work equal to their talents.


* I did call the "Don and Betty will hook up again before the series ends at least once" bit, but that seemed kind of obvious
** the dopes online who saw this as a big win for Coca-Cola are morons
*** yes, Pete was a cretin in early seasons.  This was never a show about karmic justice.
**** I cringed my way through Pan-Am and the pilot for The Playboy Club, both trying to catch some of the Mad Men magic, and both feeling like they'd been bludgeoned heavily with network notes and camp storylines out of the gate
Posted by The League at 5/18/2015 10:15:00 PM