Most often we're able to write a post, say our piece, do some interpretation if needed, hit publish and then wonder, once again, what exactly it is we're doing with our life. 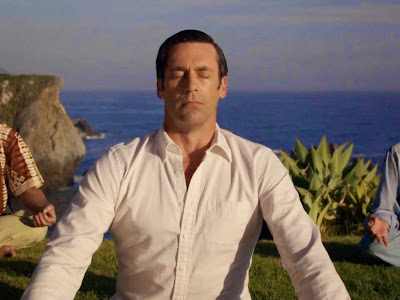 But every once in a while, something occurs that puts a new spin on something we wrote about, and it seems worth it to revisit the scene with the new evidence in hand.  With my readership of upward of five humans, I feel it's only fair to try to keep up and adjust to new information.  If I did not adjust as new info came to light, I'd still be wearing diapers and needing to be put in a very large stroller.

In the final scene of the show, the hard drinking, mid-20th Century picture of a man, Don Draper, has utterly broken down.  In his wanderings between New York and LA, he has somewhat accidentally come to a hippie meditation retreat in California, and is subsequently abandoned there by his ride, but - vulnerable and shattered, he seems to open up in a way he has not previously in 7 seasons.  In his final shot, he sits cross-legged with a group on a coastal bluff, comfortable in a meditative position.  The scene cuts to the 1971 "Hilltop" ad from Coca-Cola, and the series ends.

The ad is very real, and ran in various iterations even during my very early youth which began in 1975 (I have memories of it appearing on TV when I was very little, at least the Christmas spot).

My read on that final scene of the show is the cynical one John Hamm seems aware of, but shrugs off.**  After so much time with the character, I can't read it any other way (I also recommend this article in the New Yorker, which I felt myself nodding along with).    In season after season, we saw Don trying to better himself, and maybe he has become a better person in the year that follows that last scene with the cross-legged "om".  It seems hardly possible he could let anyone else down more or been shut out more than he has been by the important people in his life.   But he has realized what he is and he's back with his Carousel moment to share with the world, maybe not nostalgia for the kids singing on the hill, but nostalgia felt by the audience and maybe a ripping sensation as the reality of the ad snaps into focus.

Showrunner, creator, writer, director Matthew Weiner had an interview at the NYPL and had this to say:

"I did hear rumblings of people talking about the ad being corny. It's a little bit disturbing to me, that cynicism. I'm not saying advertising's not corny, but I'm saying that the people who find that ad corny, they're probably experiencing a lot of life that way, and they're missing out on something. Five years before that, black people and white people couldn't even be in an ad together! And the idea that someone in an enlightened state might have created something that's very pure — yeah, there's soda in there with a good feeling, but that ad to me is the best ad ever made, and it comes from a very good place. ... That ad in particular is so much of its time, so beautiful and, I don't think, as — I don't know what the word is — villainous as the snark of today."


It's quite surprising to me to learn that, even where I think Weiner and I agree, there's some degree of separation about what that scene meant to him and how I interpreted it.  And, basically, I wasn't able to embrace his meaning because I, myself, seem to be a bit of a cynical asshole.  This is not news.


I don't actually disagree that the commercial painted a pretty wonderful picture of people doing something amazing, something that it's hard for the young people of today who have grown up with multicultural representation (most often via tokensim, but let's not do this right now), might not fully grasp.  Even as a kid I saw it as Rockwell painting come to life, especially his Kennedy-era stuff.  Idealized, softly lit fresh faces of humanity at it's best and in it's variety.

Just out of college I finagled a work trip to Las Vegas for a convention, and I recall a visit to the Coca-Cola Museum on the strip where they were showing old Coke ads (oh my god, Coke is so good at advertising, it's insane), and I literally got a little weepy for a moment when this one came on.  It hit a chord and resonated.

I mean, it's a nostalgia trip, sure.  But it was tapping into a very particular nostalgia and for one of my youth that, even then, was now co-opted as a fashion accessory for undergrads who wanted to be seen buying "vintage" (which, in itself, has been co-opted and re-re-co-opted, but let's not go down that rabbit hole).  Gen X'ers grew up in the collapse of the 70's, and turned so hard on the sunshiney idealism of the period and it's prevalence in culture that we were the ironically disaffected youth of the 80's and 90's made the 00's and 10's when we grew up.*

Where I part from Mr. Weiner - and where I must assume I was wrong - is in how I interpreted not the sincerity of Don's ad - which I do think was as sincere as his Carousel ad - but in how I simply believed that Don had unlocked how to tap into how the sunshine optimism of the era once he'd felt it himself, and that he managed to turn it into a way to sell stuff, sincerely or otherwise.  Which, you know... Intentional or not... that is exactly what the show is saying.  Weiner simply believes in the sincerity of such a move, it seems.  I have my reservations.

In truth, in more ways than are good for me, I'm always suspicious of anyone selling me something.  Sell me a Coke because it's "refreshing", and I understand the transactional benefit to both me and the person holding the Coke.  Sell me bliss and universal love, and my wallet will stay in my pocket until I figure out what you're actually selling.  A Coke?  Fine.  Just tell me you want me to enjoy a Coke.  Why tell me a bottle of Coke is going to generate world peace?  Any version of me that did not feel nostalgia for such an ad - such as the me which witnessed the actual reunion ad back around 1990.

There's probably another whole post in which we could deconstruct the reunion commercial and what not to do with a beloved song, Coca-Cola.

Still, it's an odd thing to hear Weiner seeming to say the ad was a pure message and that Don was reflecting his newfound peace back at the world via an ad.

Funny thing, too, because Don was so baffled mere episodes earlier when Peggy suggested she wanted to make something people would remember.  But there's your symmetry (she did ask him to come back to write for Coke, after all).

But that's been one of the curiosities of Mad Men since Don's first trip to LA.  There's been an assumption that LA is/was the land of honeybees and appletrees, and it was a goal to be in LA for both our characters and maybe the audience, too.  The show has both spurned and embraced the hippie and counter-culture movements while embracing the part of it that feels a whole lot like therapy, which - and this is just me - always felt like a reminder of the modern LA-dwellers producing the show.*

That one degree of separation from what Mr. Weiner wants me to see in his final scene and what I see in the final scene seems to be that he wants the audience to have made a leap that this advertisement is a vision of a world that works.  The ad is Don Draper is sharing a better way, and not an ad placed by someone who knows the country was ready for this kind of imagery and it would tap into the youth market and the folks who just wanted to think of Earth in sweeter terms in 1971.

Is it less cynical than a woman wearing a fur coat and a smile as Don is seen casting earlier in the season?  Well, yeah.  But an advertisement is still the mechanism for convincing you to buy something, and after 7 seasons of Mad Men and Don sincerely wanting to sell Carousels and Hershey bars, sincerity and pushing product have always gone hand in hand.  That's been the genius of Don Draper again and again - but it never really meant he himself believed it longer than he needed to for the pitch.

Hell, the Burger Chef pitch was Peggy's moment of sincerity.

So, yeah, it's an interesting way to part ways with the show.  But it's also part of what makes the show both challenging and accessible.  It's never been a show that told you exactly what to believe or think about the characters or even the plot, such as it was.  Advertising is something we all see, we all respond to, we all walk in with feelings about even if we don't always understand how the pervasive and impactful nature affects us.  And while I am glad Weiner wants a better world for Don, I'm also glad this is all we saw of it.

Again, my interpretation is a shade off from Weiner's (and therefore, actually, incorrect as I stupidly believe in authorial intent), but it's interesting to see there's a different tomorrow for Don than the same one as before, even when he returns to the advertising game.

* Sorry about that, but you DID get the internet and cell phones, so quit your whining.

**I personally do believe in personal therapy.  Whatever you need to do to be well.  I'm just not someone who thinks that if you aren't seeing a therapist you just don't know yourself and never will.  I also haven't needed a self-help book since I read How to Win Friends and Influence People on a lark in high school.  Which, in retrospect, was not a self-help book at all, I guess.
Posted by The League at 5/21/2015 09:49:00 PM