Back during my young-adulthood, Christopher Guest and his band of actors were putting out a fresh movie every few years as a sort of improv-comedy troupe.  Guest had become pretty famous as part of the cast of This is Spinal Tap, the 1980's death metal spoof doc.  He took the formula and really ran with it. 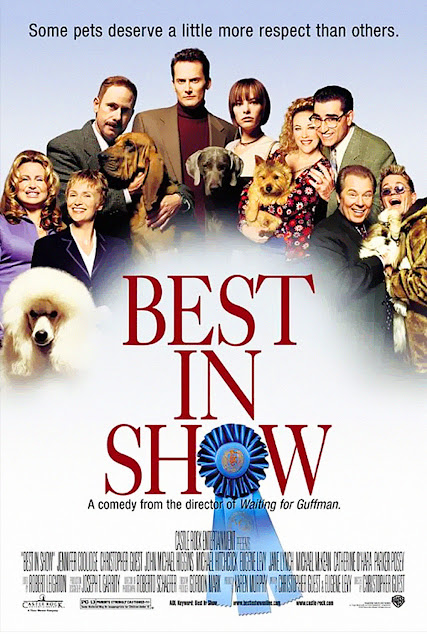 After a long hiatus from these folks, we got the HBO mini-series Family Tree in 2013, but I hadn't heard about much else.  I heavily associate these movies with my movie-going with Jamie.  We were big, big fans.

Back in 2000, Jamie and I saw Best in Show, and what we'd liked so much in Waiting for Guffman seemed to have continued, and/ or gotten better.

The premise is simple:  it's a fake documentary about several groups of people headed to the Mayflower Dog Show in Philadelphia where they will show their prize-winning dogs.  Whether this is representative of actual dog-show people, I have no idea.  It's not a world I'm familiar with in the slightest.

Let me just stop here and say:  really, Bob Balaban is the most underutilized actor in movie land.  The man's straight-man pathos is a thing of absolute wonder.

The movie also gave us Fred Willard in the most Fred Willardy possible role as a dog show TV color commentator, a role actually given to Seinfeld actor, John O'Hurley for very real televised dog shows.

I don't want to particularly talk about why each grouping is funny or works - I just suggest you watch the movie if you haven't yet done so.   There's a minimum of actual plot as the film follows characters from their homes to the dog show and then catches up with them 6-12 months later.

In making the movies, it was a very, very fine line that Guest seemed to straddle that a few other similar projects, some clearly inspired by the Guest movies, tried and failed at.  While, yes, the characters in these movies were extreme and absurd and earned a laugh, and they could make you uncomfortable, and there was always an affection for the characters.  They weren't just making characters so they could be mean or play to a broad stereotype.*  And, man, they're all so good at it.  If you liked Catherine O'Hara in Beetlejuice, her oddly specific characters in these films and the choices she makes are hysterical.

Though the movie is about a dog show, the dogs are almost entirely secondary, a sort of mirror to hold up to the characters, something they've put themselves into, yes, but also how they relate to the world.  Everyone involved, from the overly driven kennel owner played by Jane Lynch in, arguably, her breakout role, to that close-up freeze frame in the winning moment of the film as the dog looks into the camera tells you something about how we seek perfection, what we elevate and what it means.

It's fascinating to watch these characters, made up, working through their situations, semi-scripted, sure, but what they're able to pull off insofar as creating complete characters, acting and reacting, is pretty darn remarkable.  Some of the actors are pretty well known (Eugene Levy) and others, I don't think I've seen outside of these films, so I'm not even really sure how Guest built his team.

My wife and I routinely say "if you're hungry, eat" to each other when one of us going on a road trip. Love this movie.

There were a few things in the movie that really struck me as hilarious on this viewing that I'm not sure I picked up before, and that line was definitely one of them. Honestly, it sounds like something y folks would have said to me in my 20's, which is probably why I didn't ping to it back then.