I'd been intending to read Isaac's Storm for years, probably since its initial publication in 2000, 100 years after the actual storm in question. 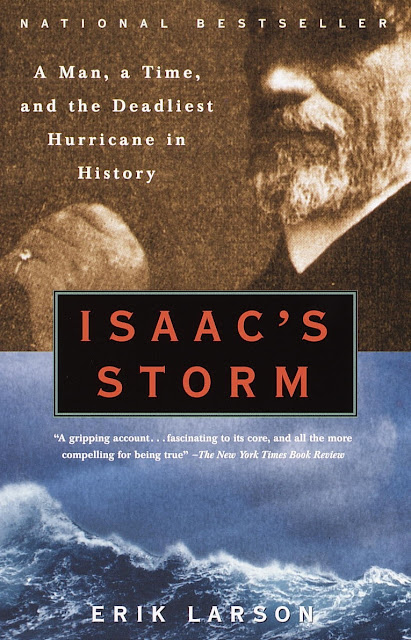 If you've not heard of the 1900 Storm, it was the Katrina of its time.  In September of 1900, a hurricane passed through the Gulf of Mexico, gaining energy and striking the boomtown of Galveston, Texas, then considered to be a growing metropolis.  Estimates of casualties are always well into the thousands, from 6-8000.   When you consider that the census had just been taken, estimating the entire population of the island at 37,000 - it could have been even worse had Galveston continued to grow.

Isaac's Storm uses meteorologist Isaac Cline as a fulcrum to explore the state of the infant science of meteorology in 1900, the why's and wherefore's of the early national efforts on this front, the growth of Galveston in the late 19th Century and the culture of the town, and the hurricane and its aftermath.

The author of the book, Erik Larson, also wrote the very popular Devil in the White City about psychopath and murderer H.H. Holmes who built a hotel that was an all too real house of horrors across the the Chicago World's Fair.  On the whole, I find his work well-researched, but his flair for finding a novelist's concepts of the dramatic in details, sometimes by imagining the scene - sometimes with dialog - and providing conjecture rather than letting the facts present their own conclusions sometimes feels a bit odd.

I wish the history of the weather service or the reasons for the American disinterest in Cuban weather reporting was as interesting as Larson seems to believe.  Anyone with a scant knowledge of American bureaucracy vis-a-vis the spoils system of the turn of the century won't have a hard time understanding the situation, and the issue with Cuba could have been better summed up with "good old fashioned racism" rather than the hoops Larson jumps through to hint at the idea.

But there's no question the book really takes off once we get past the preamble and into the storm.  The details about the lack of information and where we were at the time certainly help to frame what occurred as the storm bore down on the island, and the personal accounts pulled together by Larson create a cinematic scenario in which we get several different perspectives from survivors regarding what it was like as the city went from amusement, to concern, to fear, to devastation within a matter of hours.  While I've read some about the storm and looked at some historical photos, that flair for the dramatic really does bring the events to life.

I was curious for some commentary on the social norms of the time, which Larson mentions, but doesn't necessarily go into detail to discuss, impacted the event.  What was the effect in the non-white communities?  We don't really hear.  In fact, I'm not sure Hispanics are even mentioned in the book outside of Mexico and Cuba, but this being a Texas boomtown, I assure you, Hispanics were around.  And while Larson makes some nods at some ideal of racial harmony on the island before the storm, the Black Community and the impact there is not discussed.

Larson spends some amount of energy trying to understand Isaac Cline and his brother, both products of their time, and its here, most often, it feels like the book reaches.  Larson decides early on that there is a split between the brothers and seems to manufacture a tension stirring before the storm and one the storm itself unleashes.  But it seems that this may be a bit of imagination on the part of the author.  There just isn't ample evidence to add in this bit of Greek Tragedy.  And, in the end, I don't know that we ever get a complete picture of Isaac Cline from the details in the book.  It never feels like much more than a snapshot here and there, but it's an incomplete picture.

As a Texas resident and regular visitor to Galveston (I work with two universities there), I have maybe some insider knowledge of what occurs on the island during a storm, and the geography of the island and how a storm would impact the island is pretty self-evident.  The book was written before Hurricane Ike, which struck Galveston in 2008 and caused serious damage, water rising well above my head (at 6'5") with markers in bronze placed on the side of 2-3 story houses in town showing where the water reached during that storm.   Larson gives short shrift to the Bay Affect of hurricanes on the island, but it's as much an issue that the bay surges with water and rushed the island from both sides during a storm that causes issues as most anything else.  But I'm not sure anyone talked about that until Ike.

What Larson does understand fully is the spirit of America in 1900 (and the spirit of the industrialized world).  He gets that anything and everything was but a technical challenge, that anything was seen as possible once you had the math right and were willing to give it a go.  The building of massive sea-walls, trains that ran on tracks to carry people and goods across the bay a few times a day.  What steps that would be taken after the storm in a shockingly brief period of time.

With that strength came hubris, and quick survey of the beach even now leaves me wondering "what are you people thinking?"  While the island is long, running miles from one point to another, it's narrow across the middle, with no elevation.  While the waves are low and rolling, the place feels vulnerable to the mildest storm.

Today, Galveston is a beach town.  The economy is obviously not terribly strong.  Off the beach and in the neighborhoods, it has a strange, haunted quality left by a city that never quite recovered from the 1900 Storm, with architecture dating from the period mixed with mixed with mid-century and modern homes.  The Strand still looks like a gas lamp area, maybe the only one in Texas.  And there are so few people anywhere.

And the fact it is still there is part of what keeps me fascinated.  The UT Medical Branch is still in a terrible part of the island, the first floor of many buildings flooded during Ike, the Texas A&M campus sits on the bay, and the librarians there tell me how water came lapping at the door during Ike.  The bay is probably 200 meters from the door.

And, of course, the book predates both Katrina and Rita as well.  And all damage done in the places 10 years ago echoes back through this book.

Despite my comments, I actually do recommend Isaac's Storm.  It doesn't feel as full a telling as it could be, but what is there is worth understanding and contextualizing.  That the study of Earth's forces is paramount is without question, and that cooperation among the weather services is key is something I think scientists now accept without question.

The story isn't fit for Hollywood.  There's no heroic ending to losing 1/5th of a town's population to an Act of God.  Short of a macabre spectacle, I'm not sure what there would be to see.  But it's still an important story that I'm not sure many know about, even in Texas, even folks who spend their vacation budget to stay there during Hurricane Season.
Posted by The League at 11/15/2015 04:23:00 PM