X-Files is Back For Some Reason!

Look, I'm not made of stone.  I started tuning into The X-Files in 1993 when it was schedule adjacent to the short lived series The Adventures of Brisco County Jr. (a show canceled way, way too soon).   And, yeah, I dug that shortish FBI agent and her skeptical ways and off-the-rack pantsuits.

I was also into aliens and real-life UFO conspiracy stuff at the time.  Skeptical, but this was an era before YouTube or 10,000 cable channels - a state of things that meant, eventually, this dude got a platform on the @#$%ing History Channel 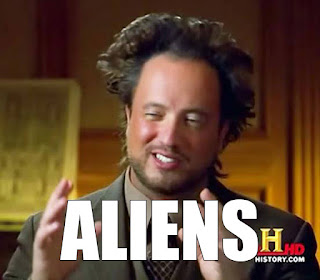 :
But, again, in 1993, access to those videos you'd see written about in books and articles were hard to come by, so why not at least entertain the notion?

In short, The X-Files was the first TV show I ever watched first run in prime time with any dedication, at least as an adult.  Otherwise, I guess you could say I'd had strong feelings about The Dukes of Hazzard when I was 6.

I was rapping with Stuart today, and the problem I have when it comes to fond memories of The X-Files is not that I didn't watch enough.  I watched on and off the first two years and got into it pretty well in year 3 and watched solidly to the end of season 7, I guess.  And I paid to see the first movie in the theater and everything.*

But Stuart has really fond memories of specific episodes.  I do remember some specific episodes, but far, far less so than some.  It was a long time ago, and I've replaced those brain cells since the mid-90's.  As I told him, I remember the Peter Boyle episode and the one where Luke Wilson is a small town sheriff in Texas and the pizza delivery kid is a vampire.  But I was mostly watching for the mega-narrative of the conspiracy.

As one may recall, by end of season 7, it became very clear that Chris Carter and/ or his showrunners had absolutely no idea what they were doing.  And, with Duchovny leaving the show for a film career and Tea Leoni's greener pastures, they refused to just wrap it up.

Full confession time - I once upon a time worked with a former low-level producer from The X-Files.  The story I was told was that - and this basically makes sense - X-Files only really hit its stride once Chris Carter left to go work on his many failed other TV series, leaving X-Files to other people.  Harsh Realm fizzled quickly,  Millennium had a strong premise and then withered, and I am unsure if anyone remembers the X-Files B-squad The Lone Gunmen got their own TV show.

Once these were all done, Carter came back, and that's right about when the show started falling apart.

At some point, it went from "wow, this conspiracy is massive!" to "well, none of this makes any sense given what we've learned previously, and now it seems pretty clear they don't actually have a plan."  In short, the show broke trust.

In case you haven't noticed from my irritation with things like The New 52, I don't have a lot of patience for media where it feels like the folks running the media are paying less attention than the people consuming that media.  In a pre-DVR era, I was having to clear 22 nights a year -  first Friday, then Sunday nights - to make way for the show.  All based on the promise that they sorta cared and would reveal something eventually.  And I think the folks on the show did care, at least until Carter returned and Duchovny left.

What I think we can all agree upon, no matter our love for Robert Patrick and Annabeth Gish, is that when X-Files was put down, it was a mercy kill.  They'd taken it as far as they could, the conspiracy so mangled and strained, you'd have to do some serious Wikipedia'ing to even try and figure out how it worked (and how it never really resolved).  It really seemed unfeasible that it would hold together for three seconds with all the layers of duplicity the show insisted were in place in order to keep the audience guessing (if the writers don't know, how can the audience?) or that it wouldn't need to employ more people than the USPS to function.

But what I want to give the show credit for is that it was the one that broke the entire model of network TV.  It was the first non-soap to really insist that viewers commit and show up weekly to follow the mythology.  Younger readers won't recall, but in a pre-DVR era, non soap opera TV was incredibly episodic and bland enough that anyone could stumble into an episode and figure out what was happening.  There are plusses and minuses to the episodic approach, and when I re-watched all three seasons of Wonder Woman, I actually quite liked not having to keep 3 years of TV in my head at all times to understand what was happening, but I'm also a Mad Men fan, and that show could contain a meaningful look referencing a throw-away line from an episode four years prior.  And that's rewarding, too.

There just wasn't really much of a model rather than the constant churn of soap operas to give X-Files a model.  At least not on American TV and it's 44 minutes per episode 22 times per year.  Back then, we'd watch British TV (and, less so, the weirdness of Babylon 5, a very continuity heavy show), and wonder "why doesn't American TV work this way?  It's so weird."

I don't blame anyone for sticking it out, even when Scully also left the show.  (She did, right?  I was gone by then.).  I did turn up for the finale, and the thing about the finale was that it seemed like it was hastily written to tie up a few loose ends and give them an out in case everyone had second thoughts.  But I also know people watch a show well past the point of sanity or shark jumping.  That Friends ran for something like 10 years never fails to surprise me.  That Big Bang Theory is still doing this well at this point blows my mind, and don't get me started on the CSI franchise (which, honestly, I've never seen).

In some ways, I think X-Files was kind of bad for people.  It spawned a heroic and intellectual bent to loony-tune conspiracy theorists who suspected the government of outlandish schemes while ignoring the very real schemes happening in broad daylight (see: Alex Jones).  Turned Mulder-like obsession and belief in half-baked conjecture into something palatable.  We're all too smart to buy anything that doesn't confirm our ideas these days, no matter how bad or dumb our ideas are because anyone disagreeing with us is part of the conspiracy.

Also, the apparent success of Finding Bigfoot weekend long marathons on basic cable tell me something about what we aren't teaching in schools.

But, more than that, and I think the new episodes bear this out:  there's not really a whole lot more story to tell that doesn't feel like just more X-Files what we had before back when I was excited to legally order a drink.**   It doesn't feel far enough away to get nostalgic, and lessons of the past suggest more-of-same of the episodes will lead to more-of-same of Carter not knowing where this is going.  Unless he does.  But I've already been on this journey for at least 100 hours of TV.  It reminds about that old joke "How do you keep an idiot in suspense?"

And, yet, here we are.  I, too, watched the first two episodes.

They were fine, I guess.  They certainly felt exactly like old X-Files episodes.  Deep down, what I want to believe is that after 20-odd years of doing this, they have an ending in mind.