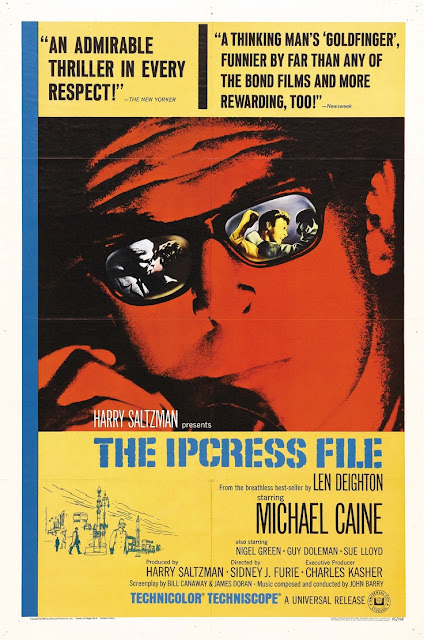 The Ipcress File (1965) is one of those movies you see mentioned a lot, especially in conjunction with the name "Michael Caine", but I'd never actually seen it, myself.  Just as Bond movies were taking off, Bond producer Harry Saltzman decided to launch a competitor to Bond's sexy, sly cartoonish spy adventure and gave us a spy somewhere between Bond and George Smiley.*  His world is not about bureaucracies being very sneaky against each other, nor is Harry Palmer going to drive a high end sports car with a smoke screen and rockets, either.

What really stood out for me, though, was that Harry Palmer - at least in this film (and he's in 3-5 films, depending on how you count them) - feels like a very real sort of person in comparison to James Bond.  Chalk this up to Michael Caine's talents or a very clever script, but Harry Palmer is a semi-ne'er-do-well who is happy having a government check, finds all this easier than working for a living, and is riding out this "spy" gig he's got going on until the gravy train runs out.  In the meantime, he peeps on people and doesn't particularly care for the rest of the rubbish paperwork.

Until he's changed offices and put on a real assignment.


I really, really don't want to spoil the plot of The Ipcress File.  As in all good detective and espionage stories, the fun is in the discovery with our protagonist.  The story does tilt into nigh-sci-fi territory, but had a basis in reality if you know your shady government conspiracy stuff from the post WWII-era.

As you can see on the poster above, it was pitched as counter-programming to the insanity of The Avengers and James Bond, and reflective of a more novel-esque approach to this sort of thing without quite getting into the melancholy of a John le Carre book and the moral neutral zone of spydom and paperwork there.  It's also reflective of the more work-a-day thinking about spying that appears in British thrillers, where Americans insist that even their police CSI offices must have odd-ball neon lighting and futuristic architecture, and everyone is so on the go, there's never anything of bureaucracy that they aren't able to buck.

I'm reminded of how office-like I found Greg Rucka's Queen & Country comics (highly, highly recommended), and the past couple years I think I've grown to appreciate all the more what Rucka was up to, and what he was reflecting.

The movie is directed by Sidney J. Furie, and if that name sounds familiar to you, he's made a crazy array of movies, from this thoughtful thriller to the first two Iron Eagle movies, Superman IV, directed episodes of Pam Anderson's V.I.P.**, and that weird syndicated show Pensacola: Wings of Gold, but he also did the famous Lady Sings the Blues.

This movie sort of suggests the movies that were coming in the U.S. in the 1970's, like The Conversation (1974) and Three Days of the Condor (1975) where a U.S. bureaucrat working in intelligence is suddenly in over their head - movies that got full on cheesy by the late 80's and more or less disappeared by the late 90's (with a smidge of that flavor showing up in Captain America: The Winter Soldier, of all places - but obviously hugely modified).

Again, I think Michael Caine is just great in this.  Growing up, Michael Caine was just Michael Caine - he already was the fully formed star you think of now.  So it's amazing to see these movies going back to see where he was coming from in his youth, making a name for himself as this somewhat unlikely hero.

In short, I'll be checking out more Harry Palmer movies.  There were two more theatrically released and two on TV in the 90's.  I also now get a few more references in the Mike Meyers Austin Powers flicks.  Hooray for me getting a joke 20 years later.

*speaking of, while I've read the le Carre novel of The Spy Who Came In From the Cold, I've not seen the movie, also from 1965.  That may need to get resolved.