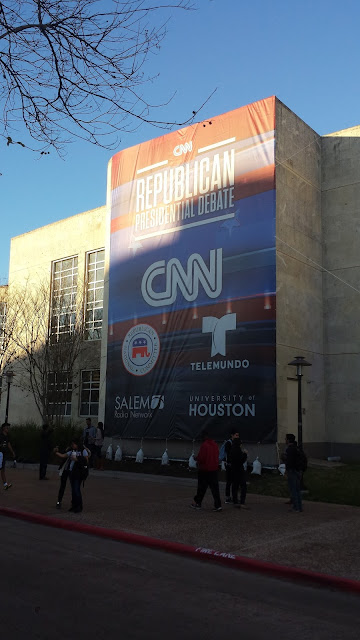 This week I was in Houston for a short conference at which I presented.  A nice, friendly little conference we have once a year with folks that have known each other a while, and where new folks are usually made to feel very welcome.

I was staying at the hotel on campus, a Hilton commissioned by the late, great Conrad Hilton as part of the hotel management school at the University of Houston that bears his name.  During the conference, the candidates for the Republican party were slated to have a debate on the other end of campus, but CNN had set up adjacent to the library.  So, yes, yesterday I saw the back of Anderson Cooper's magnificently silver head.

Wednesday we got in early and I thought I was having dinner with work people, but - luckily - that failed to materialize and I had a long overdue and entirely enjoyable dinner out with the great JimD of jimdedman.com and Abnormal Use fame.  He happened to be in town for a conference of his own.

What's remarkable about Jim, and what was kind of remarkable about meeting Jim in 1997 or whatever, was that even back when I met him, I felt like we were picking up on a previous conversation.  I don't think I'd actually seen the man face-to-face since a trip to Beaumont in 2005 or so, and we picked up, once again, like I'd just seen him a week ago.  I miss that dude.  He needs to move out of the Carolinas and back to Texas.  We can use solid individuals such as he in the Lone Star State.

Thursday was the actual conference, and I was the first speaker after the introduction.  Because this is a casual conference and everyone knows each other, I was a bit free-wheeling in my approach, and I've long since taken the position that - much like this blog - I'm up there to amuse myself for forty-five minutes.  It's maybe not advisable to do this all the time, but it's the only way I can do this and not feel like I have to apologize to a pre-1999 me.

Thursday evening was wrapped up with a conference dinner and then drinks at the bar in the hotel right there on campus as the debate was going on.  It's always nice to catch up with work people outside of work.  Even if your stance on copyright drives them to distraction.

As I mentioned in a prior post, I'd been at ASU during the Kerry/ Bush debate in 2004, and it had been a real fiasco.  This was far less so.  There weren't hoards of students thronging the CNN tents as CNN went live.  Security was reasonable.  Whatever events occurred in town for the candidates occurred elsewhere.


College Game Day would producer a crowd 10x the size, I am certain.

Maybe the most surprising sight of the day was a young woman in a hijab and Ted Cruz t-shirt making her way to the tents.  I had so, so many questions.

While we drank in the bar, far from the TV, we could still somewhat hear the debate - at least the tone of the debate.  And we could hear the audience watching it like a live comedy event.

We broke up our party a while after the debate ended and I was on the elevator with someone from CNN who looked well dressed and official, and - two Old Fashioneds to loosen me up, "So, how'd it go?"
"Great.  Just, really great," he said, all smiles.
"Yeah, we were in the bar for a work thing, so we weren't watching, but folks were going crazy."
"Oh, yeah.  Those guys went crazy on each other.  It's going to be just amazing for ratings."
Then the doors opened, and we parted, and, yeah, I died a little inside.

You know how these things work, I know how they work.  But, I guess, I'm just an optimist enough to hope I'm wrong.  That CNN is just waiting around for the real news, that they want eyeballs that aren't the same eyeballs that watch Honey Boo-Boo.

I'm well aware that everyone is a human, that we can expect imperfection in our leaders.  I'm just at a bit of a loss watching the Real Housewives approach making its way into Presidential debates.  Lincoln vs. Douglas, this is not.

This morning we wrapped up our conference and CNN put their anchors back in storage until the next election. 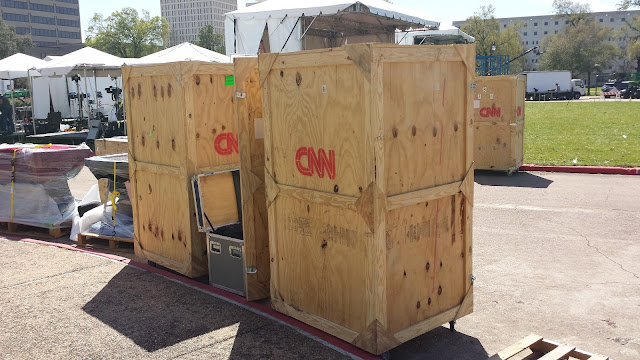 Can't believe I missed you by three measly days!

well, one day when you and Your Dude come to Austin, I'll buy you a taco and beer.