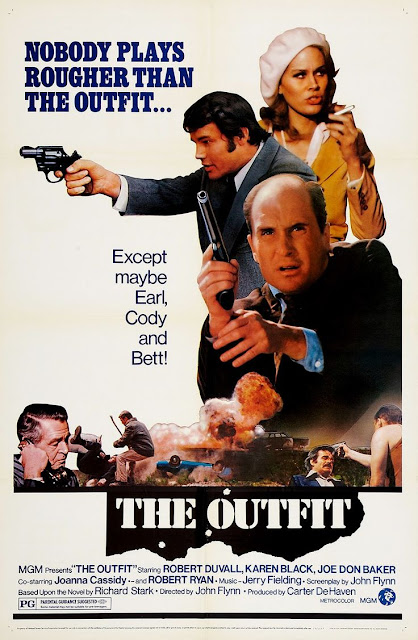 I've seen a few adaptations of the Richard Stark-penned series of crime novels starring heist-man, Parker.  Point Blank (great), Payback (not so great), Parker (really not so great).   Maybe another one or two.  But The Outfit (1973) was maybe the closest to an actual Parker book in spirit and execution.  I won't dwell on the differences, because they're many, but the movie does use scenes from the book in whole and in part (it's been a while since I read the early Parker books, and I think they pulled a scene or two from other Parker books, but I may be wrong).

The movie captures a lot about the world of Parker.  It's a lot of backroads, hiding or waiting in cheap motel rooms, the people you try to work with are unreliable and dangerous, and the people who are the closest thing to something you'd call "friend" tend to wind up dead, in prison or both.

I really didn't know much about the movie before SimonUK brought it over Sunday morning for a view, other than that it starred Robert Duvall in the Parker role - here named "Macklin" (author Richard Stark wouldn't let films use the name "Parker" - I suppose until they made a straight adaptation).  The film co-stars Karen Black and Joe Don F'ing Baker.

But, really, the big treat of the movie are all the appearances by some of the players from noir pictures of the post WWII-era, seen here just a bit on, but all super recognizable.  In fact, Robert Ryan plays the aging mob-boss type with the young, pretty wife (Bladerunner's Joanna Cassidy).  Jane Greer also joins several veterans from Kubrick's heist-movie-masterpiece, The Killing.  Elisha Cook, Jr., Timothy Carey, and - a personal favorite, Marie Windsor.

Changed up a bit to start fresh and not rely on the action of the two prior books as the novel of The Outfit relies upon, in this case, Macklin gets out after doing some time in prison and finds himself set up to get killed, and his brother, with whom he pulled the job that got him in jail - has been killed.  Turns out the bank they robbed was owned by The Outfit (a fancy name for a mob syndicated).  Macklin starts digging, striking at the holdings of The Outfit, grabbing cash and making his way toward the man who could pay him off, but you know he won't, and you know Macklin is going to keep moving until he gets to him.

Tied up in the mess is Bett, the sort of "lost" female character that tends to wind up in these movies to give the protagonist someone to talk to and sleep with and lose their nerve.  She's an adaptation of a very different character from the novel, as is Joe Don Baker's "Cody".

That rough gas-station and cheap-motel feel of the Parker books is in full display, but so is the straightforward but thoughtful approach of a Parker heist, the chaos that occurs once a punch is thrown or a trigger pulled.  Once the characters turn to violence (and all are ready and capable), it's as far from a John Woo opera of action as you're like to see.  It's clumsy and messy and it's hard to see the upside.

I greatly enjoyed the movie, in part because of all the actors who kept showing up and surprising me, and in part because in this era of hyper-polished, cartoon-fantasy heist and revenge movies - even a Stark adaptation like Payback is so glossy and polished that nothing sticks.  There's just the ballet of people shooting in slow motion, ridiculous characters, and none of it feels possible.  And there's room for that, absolutely.  It's just nice to see a crime picture that actually understands what "grit" looks like on some level.

Of course, I'm already kind of in the bag for Parker, so, I may have been a bit predisposed to like this movie.  But, I'm also a little unforgiving about these things - so only your eyes on this movie can say for sure!
Posted by The League at 2/22/2016 12:38:00 AM