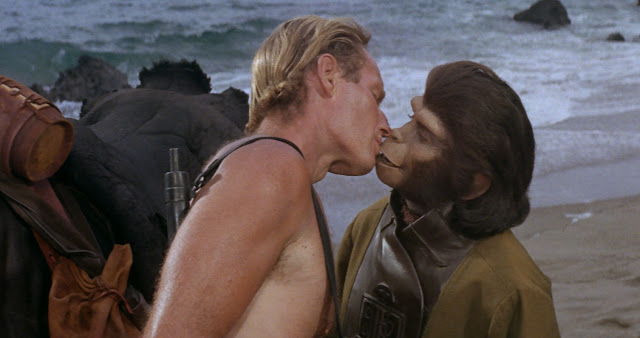 Ah, romance.  Specifically, the kind we think of when we hit Valentine's Day.

Valentine's Day is, let's be honest, for people who are a-courtin' or long-time couples to jump through a few hoops so it's clear they're still engaged and interested in each other and the fire hasn't totally died out, but at a reasonable cost (Christ, you just bought them a Christmas present, like, 6 weeks ago.  You're not made out of money and you're still paying off those credit card bills.).  On Valentine's, single people will start to conspiracy theory minded, insisting those coupled-up folks are rubbing it in the faces of those who don't have someone with whom they readily swap spit.*

No one is going to accuse me of being the world's most romantic-type person.  Sentimental, sure.  But as "romance" is so ill-defined outside the cover of novels which are usually just set-ups for Cinemax-late-night action for people to read like its classy, I'm just not clear on what "romance" is supposed to be.  When I buy flowers, I don't really know why I'm doing it.  It's because I can read a calendar and I can replicate both human emotion and expression of emotion when given access to a website and functioning credit card.

It's probably also instructive to mention that I haven't been on a first date since 1995, and I've never seen The Notebook.  And, I have had to be instructed to please not pause movies and point out why two people supposedly in love are acting like complete morons.

So, what do I find A-OK when it comes to romance?

Let's take a look at some examples of some ideal romances in media. 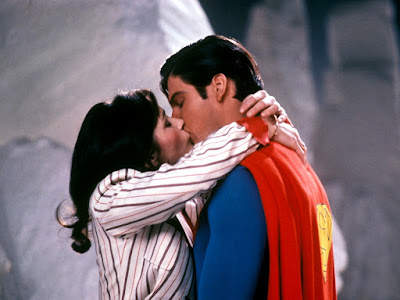 
That DC Comics in 2011 decided to break-up Superman and Lois Lane and hook up Superman and Wonder Woman was either an artifact of the Siegel Family lawsuit and what might have been coming for DC Comics should the Siegel's regain the rights (they'd get use of Superman and Lois, for example), or it was a fundamental lack of understanding of the character(s).

It may actually be true that Superman needs Lois a whole lot more than Lois needs Superman.  She appears in Action Comics #1, appearing in all Superman media just after Superman and before The Daily Planet is named, Perry White doesn't exist, years before Jimmy Olsen, Jor-L and Lara, and Jonathan and Martha Kent have real names.  She's absolutely key to Superman's world from jump, because she's the brains, gutsiness and spirit Superman loves so much about humanity in one package.

At the end of the day, it's all about coming back to Lois, and saving Lois is saving the only world that matters.

Any book you read about Superman will harp on the fantasy of a Lois that picks on Clark Kent, but is in love with the real man behind the glasses and off-the-rack suit once he's really revealed himself.  But I think that misses where the relationship went, even in The Adventures of Superman  TV show.  Lois is the one who also sees Superman with his guard down, neither Clark Kent reporter (but dork) or Superman the icon - but the man who does amazing things but needs a peer and friend.  Lois could be okay without Superman, but maybe not him without her.  And she, maybe, loves him for being who he is as a person in all the facets of the Clark Kent/ Superman/ Kal-El persona, and for being in awe of her - respecting her and what she does (well, maybe not so much in the Silver Age) - even for all he can do. 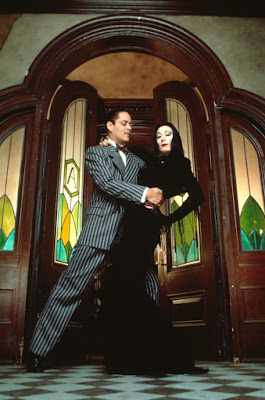 The ideal of marriage for everyone to strive for.  Still very much in lust, still surprising one another, still passionate but indulging one another, insisting they each spend their days as they please.  And, of course, two (or three) kids, a brother and mother in the house haven't gotten in the way of their great love affair, only made the house a happier home.

Yes, the idea is that The Addams are somehow blissfully unaware of how they differ from the world outside, but perhaps that's because they're in it together, allowing for one another to be themselves totally and completely and not just tolerating it, but finding a perpetual romance machine in there somewhere.

This is the marriage to strive for, people. 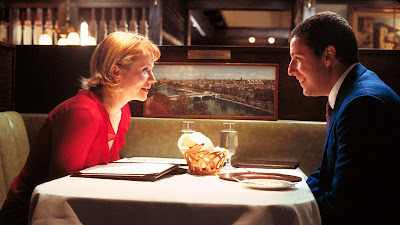 Sooner or later, someone will ask you your favorite movies in a genre, and I usually have decent answers.  But when it comes to Romantic Comedies, short of movies made before 1965, I don't really have an answer.  In real-life I can barely tolerate hearing a person discuss their relationship woes, and going to a movie is like watching someone play out their issues for 90 minutes - someone I don't know.

And it all feels awfully contrived and artificial en route to being "cute" and "relatable".

When people ask me my favorite RomCom, I always say the same thing:  Punch-Drunk Love.  Made back when Adam Sandler wasn't cynically taking vacations on movie studio dollars or making a living for his less-successful friends, this movie was a goddamn Paul Thomas Anderson movie, which should probably disqualify it from the category in principle, but it's my entry, so, to hell with rules, man.

For all its supposed quirkiness, the film still works - maybe in a hyperbolic sense - but it brings about the highs and lows and feelings of inadequacy and hopelessness.  It acknowledges that the biggest time bomb to go off in any relationship we want to succeed is invariably who we really are after the mask drops.  Maybe we aren't all being blackmailed by Philip Seymour Hoffmann (R.I.P, man) for that one time we called a phone-sex-line, but all of us know what it's like to know we've got something we're going to have to beat to overcome our biggest hurdle - ourselves.

This may have no relation to anything that literally happened in the early days of my romance with Jamie, but metaphorically, this one felt incredibly dead-on.  Because romance is hard and requires diligent work to buy more than enough pudding for airfare coupons.

And whatever director PTA learned must have worked.  He's shacked up with Maya Rudolph and 3 kids.  That's pretty well done in my book. Relationships are complicated.  Sometimes those relationship problems are expressed via a lifetime of unfulfilled longing, aerial martial arts and majestic swordplay.  But if the object of your affection is Michelle Yeoh, you know what was coming when you signed on.

Romantic Drama is another category that's not just hard to define, but generally turns out movies I have no patience for.  Sure, the complications of romance turn up in almost all superhero faire, and this section could have been the heartbreak of not being able to be with Jennifer Connelly because you turn green and smash things.  Or about how you never had that dance with the fetching SSR Agent because you had to crash that Cosmic Cube into the North Atlantic or thousands would die.  Or it could have been Sir Anthony Hopkins unable to not be a Butler long enough to tap some maid ass in a Merchant Ivory Joint.

But this is one of the few romantic dramas that got to me, and not just because Ang Lee can really put together a sword fight (but, hey, he made my short list, too!).  A lifetime of being apart and unable to fulfill your personal potential because, hey, duty and swords, that's some serious stuff.

I might have put Last of the Mohicans on here, but let's be honest, Hawkeye just met that girl when he went to all the trouble.  But at least Chow-Yun Fat and Michelle Yeoh had a decade or so of steaminess between them when things went sour, and they managed to have a pretty solid understanding and romance despite not getting much time together until one of them was going to that sword-fight in the great beyond.

I can't make romance work for you people, but I can tell you - I don't get it.  In many ways, you should pity Jamie, because I'm not one to write a poem or make large gestures.  But I also don't think movies are a terribly good guide for how all this works in practical terms.  And, in fact, I suspect some folks I know who have relationship issues watch entirely too many movies and keep waiting for a softly lit (insert handsome actor with good teeth) to walk in the door and be one of these romantic stories every day.  That's hard to do for 90 minutes, let alone a lifetime.