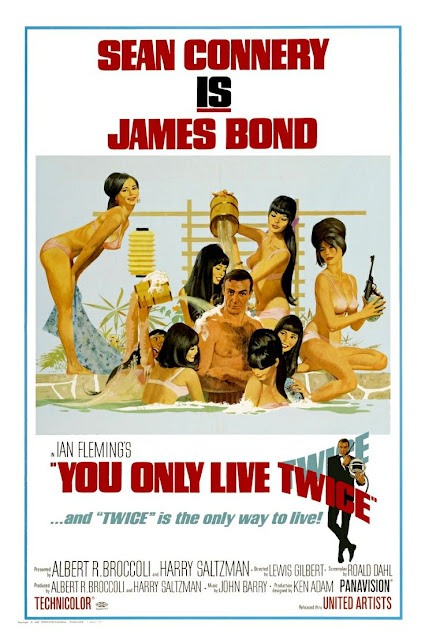 We give You Only Live Twice (1967) the most prized of all Signal Watch awards: The Stefon (the award for the movie that has EVERYTHING).

After the frantic shenanigans of Goldfinger, producers Albert R. Broccoli and Harry Saltzman clearly believed they were in some sort of race against The Devil who would consume their souls if they did not keep making bigger and crazier James Bond films.  Thunderball went all over the place, winding up in a massive underwater battle and then out of control hydrofoil battle.

You Only Live Twice has: 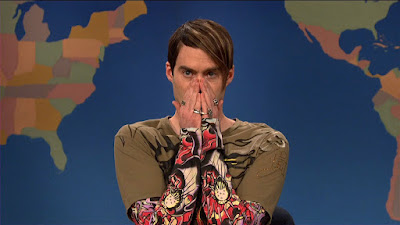 It's a super strange movie, and it's made all the stranger by the fact the screenplay is by famed writer Roald Dahl.  Yeah!  Roald F'ing Dahl!

The producers were clearly way into exploring Japan in a post WWII context as a sort of friendly place we don't know much about, and, to my knowledge, it's one of the first English or American films with ninjas - so it may well be ground zero for the beginnings of bored American suburban kids' fascination with ninjas (but is not responsible for the pizza or turtle portion of the formula).  But for as much as it also wants to be about the space-race, it's pretty clear Mr. Dahl, a former RAF'er, or Saltzman and Broccoli knew jack and @#$% about the American space program or how any of that works.

Our plot is that the Americans lose a space capsule when a slightly larger ship shows up in space, the front of the invading ship opens and eats the American capsule.  The Americans think the Russians did it to try to dominate the skies, and when a Russian capsule disappears under identical circumstances, the two countries edge ever closer to war.  All directed by the evil machinations of SPECTRE and Blofeld.

For some reason, they can barely track the thing as it comes down (let alone see when a rocket takes off, something that is visible for literally hundreds of miles), which it seems to do somewhere near Japan.  Bond, it seems, got top honors at Cambridge in "the oriental languages", but never traveled there. The game plan - which is not at all clear - is that kidnapping astronauts and cosmonauts will somehow trigger World War III, from which Spectre - in the Hail Mary of all super-villain plots - thinks it will take over the world.

I'd say the first third of the movie moves at a rocket's pace, but the entire movie does so, with scenes and set-ups thrown in just-'cause, not because they necessarily advance the plot.  They're just neat-o.

Bond meets the fetching "Aki" - and in the first reel, she saves his bacon over and over as Bond sort of bounds around Japan, not seemingly paying much attention to being James Bond.  Weirdly, Aki is written out of the script at about the 2/3rds point and replaced with another female.  It's a bizarrely uneconomical decision, storywise, and even for a Bond movie, it makes her death a little casual.

But the movie is just kind of like that.  There's a pointless sumo scene so we can see sumo wrestlers (inspiring Fat Bastard's career transformation in Goldmember).  Ninjas are introduced in a training sequence to fit a Bruce Lee film, but then poorly deployed.  There's a "rocket bullet" - apparently a real, experimental thing at the time - which never is seen again.

If you ignore the monumental bodycount, it's a really, really fun movie in its way.  Just don't think too hard on the plot, and keep your eyes on Blofeld's cat, because apparently you can see the exact moment the cat freaks out and ran away for a few days on the set (and, yes, while watching the movie, Jamie pointed out "Look at Mr. Bigglesworth.  That cat is losing his mind." and on the IMDB page, they confirm, the cat took off after that scene for a few days).

I know this one doesn't have sterling critical reviews, but I liked it.  You have to forgive the stupidity of Connery in Japanese disguise.  The movie is actually as respectful of another culture as you're like to have seen in a movie from this time, even if it's in that Three Caballeros mode of "wow, you guys really gotta check out these exotic women" mode for white dudes, it's not condescending, and that's a step up for Bond.

But, yeah, this is some high-adventure silliness and while not as cool as Goldfinger, it's still a good time.  I'm also pretty sure I was a little extra forgiving as I was really in the mood for a Bond movie when I watched it, so your mileage will vary.
Posted by The League at 2/20/2016 10:43:00 AM

I always think YOLT as Bond film where the scale of the villains and their schemes surged to a new level. The volcano fortress, the space weapon and the global threat all paved the way for the campy, over-the-top bond films that Roger Moore would perfect and was horribly resurrected with Pierce Brosnan in Die Another Day. I am generally not a fan of that style of Bond film, which is why I really like YOLT until the final volcano showdown complete with sword-wielding ninjas vs. factory workers wearing colored jumpsuits with guns.

Yeah, I know what you mean. Fortunately, I felt pretty prepared, and at the end of the movie managed to just cackle my way through the color-coded fight sequences and cat freak-outs.