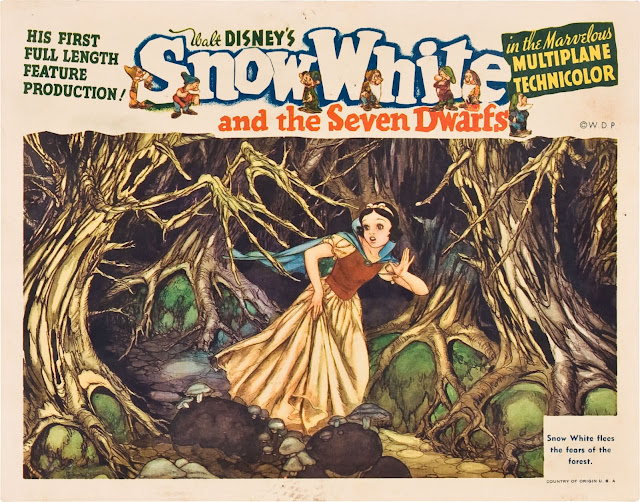 On Nathaniel Capp's recommendation, I'm currently reading Walt Disney: Triumph of the Imagination, a Disney biography from a couple of years ago (and, spoiler: it's fantastic).  Naturally, part of reading the book is the reminder it is that I haven't seen a bunch of Disney films and cartoons in years and years.

The last time I remember seeing Snow White and the Seven Dwarves (1937) was during a theatrical run in summer of 1993 when I was working at The Disney Store and we were semi-required to go see the animated films so we could talk to customers about them.  Don't worry, they paid us to do so.  Terrific perk, and I would have been going, anyway.  And while it's likely I've seen it since then, it had to have been on VHS, to date the last screening I took in.

You guys can be cynical and weird about Disney's feature films, but I only feel that way about certain eras of their movies, and even then - not entirely.

But it all started, first, with a mouse.  And then with Snow White.


Reading the Neal Gabler book, is a reminder of what you may already know:  Not only was Snow White the first animated feature, but when it was in production, it was seen as "Disney's Folly".  Here was this bright young guy who was a successful independent animation producer that had gotten those disposable animated shorts a bit of respect, added sound to animation, character, intent...  All in a very short window.  But now he wanted to get people to watch a feature length animation?

His critics (including himself) wondered if people could sympathize with animated characters for an hour and a half.  Some RKO executives (the movie's distributor) wondered aloud if the bright colors would eventually hurt the human eye.  It was all sort of the equivalent of people being certain that you shouldn't drive a train over 60 mph, as cattle along the way would drop dead from fright.

In 2016, the 1937 movie is not set to work like a 2016 animated feature, but some of what would come to mark a Disney movie right up to and including Frozen was right there on the screen, and, in many ways, Frozen is the deconstruction of what would become Disney tropes based on what was minted in this movie.  We get a generational conflict between young and somewhat naive young women and their parent's generation, musical numbers following the rules of a musical (expressing the fondest wishes of the main players), diminuitive helpers, and about a 85 minute run-time.

The animation is clearly rotoscoped - ie: they shot real actors and traced their movements - but even that was novel during the era, and the blending of life-like Snow White and the incredibly cartoony Dwarves still works like a charm.  Yes, the animation is certainly most on fire when the animators can rely on the rules they're used to from their work on Silly Symphonies and the Mickeys, and so its no wonder the broader characters like Dopey and Grumpy wind up as the Dwarves everyone remembers.

The innovation of the film was incredible in '37, from astounding use of the multi-lane animation camera (a near novelty in animation), to the management of the colors and color palette to the rich backgrounds and design sensibility.  While certainly the animators could rely on their prior know-how, each scene pushes new territory from management of gags to visuals to sound design (watching the scene where Snow runs away through the woods is also a feat of animation blocking I don't recall seeing in anything earlier).  And, of course, FX like the mirror and more.

As this is the first time I'd seen the movie in BluRay, it was great to see the detail in the art, the struggles with keeping Snow White on model from frame to frame, the lush colors and imaginative detail.

The story itself will seem slight and simple by today's standards, maybe front-loaded with exposition and business that's at home in animated shorts as much or more than pushing forward the narrative of a 3-act story.  It's also from an era where you could have a villain actually say they wanted the hero "killed" in a movie intended to be seen by children, and the villain is straight up malicious, never goofy or seemingly vulnerable in any way.  I hate to say today's "nothing that will alarm the kids" style of parenting would make Snow White a non-starter in a lot of households, but you guys are going to have to tell me how your kids dealt with the transformation from Queen to Hag.

This may not be my favorite Disney feature - there's something about Snow White herself that's so one-dimensional, it's hard to get too invested the way you might with Bambi or Dumbo.  But it's such an achievement of animation, visual style, character work, music and acting - you're kind of dead inside if you don't find something to like.