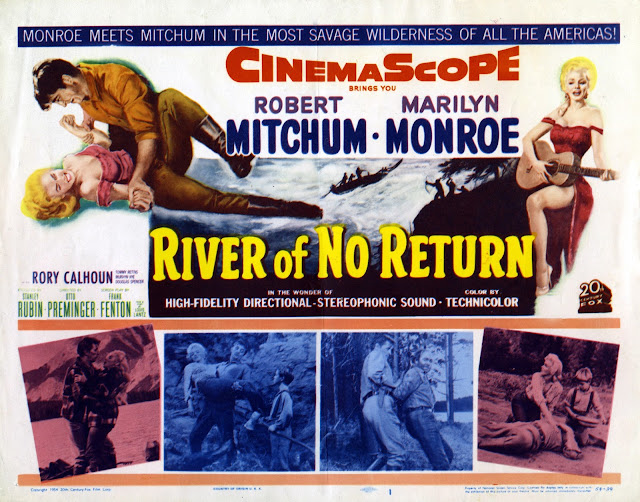 I was actually planning to let this movie be a product of its time period and discuss the film's more problematic elements further down the post, but in looking for a copy of the movie's poster, I see I'm just going to need to deal with this movie's issues as the focus.

Back in high school I had exactly one "girly" poster up on my wall, a poster cropped from this image:

But it wasn't until relatively recent times that I figured out where the image originated - as a publicity still for the 1954 movie River of No Return - a sort of western musical adventure action film starring Marilyn Monroe at the height of her powers, Robert Mitchum as our swaggering male star and Rory Calhoun (the actor with the most fun name of any actor, ever) as a cad gambler in the pioneer era of the west.


Former tough-guy, Mitchum, now a farmer, has sent for his son after the death of the child's mother somewhere back in civilization.  Mitchum's son (the kid who would show up as Jeff on Lassie in the 1950's) has been briefly cared for in a mining camp by the chanteuse of the local saloon - Monroe.  Mitchum and son return to their farm, and a day or so later Monroe and her fiance (Calhoun) drift by on a raft, headed for a town down river in order to claim a gold stake won in a card game.  Calhoun decides he wants to get there fast, steals Mitchum's horse and gun and heads off, leaving Monroe, Mitchum and Jeff from Lassie to get down river and find him (and avoid hostile Indians).  Adventure ensues.  And, Monroe keeps singing.

The movie builds toward sexual tension as Mitchum - our strong, masculine silent-type and Monroe in something approximating "firebrand" mode are put together and bond over Mitchum's kid and certain death.  All of which comes to a head in a scene that is a firm reminder of the eroticism of rape in popular culture.  And if you think I'm making too big of a deal of it - it's right there on the poster above, and this other one.

Like, 85% of the posters I pulled up in Google Search featured Mitchum pinning Monroe.  That's not a fluke.  That's how the studio was selling the movie - Mitchum is not going to let Monroe play coy as she does in her other pictures, he's going to wait til they're alone in the woods and then grab her, fight her a bit, chase her, throw her on the ground and then force himself on her - and we don't know where this would go because the scene is interrupted by an emergency off screen.

That's what you're looking at on the goddamn poster.  Yeah, the scene is just one scene, but that's the selling point, and that's hard to ignore.

What's most bizarre is that, within 5 minutes of real time in the film, Monroe is then almost carted off by two other guys wherein the threat of rape is deeply implied - but that's clearly the wrong kind of rape.

After the movie wrapped - with a scene in which Mitchum retrieves Monroe from a saloon by walking in mid-number, picking her up and throwing her over his shoulder and walking out to dump her in his wagon and take her right back to the cabin that just burned down and which was relentlessly threatened by Natives (the vulgarity of Mitchum's cave-man approach the absolute final straw for Jamie) - we talked for a bit about this sort of thing was unusual in scale but not in spirit for big Hollywood movies of the time.  Yes, there's often an implied threat of rape for women in films of all eras and genres, often to demonstrate that one needed to tear down the walls so the ladies can cast off their silly notions and love a real man - but this was in a class of its own.

That the scene in question isn't a major sticking point in the Wikipedia article (in fact, it's not mentioned) or in other write-ups I spot checked tells me we're pretty forgiving of movies of other eras, and I truly do wonder how this was seen by women in 1954.  Romantic?  Sexy?  A literal bodice ripper?  I don't want to interpret too much.  But there's no question that we're in a different era, and the convention of "taking" a woman is treated far differently, even in this post-Dan Savage culture where even that idea is up for grabs (I don't really care what you people do consensually).

What's interesting to me is the difference in power women so often hold in Noir of the same era.  While gender roles still start off in a certain place, women pick up guns, they tell what they want and don't want, they kill, they hold the fort, they get revenge in deadly ways, they aren't treated like children without their own thoughts - except by people who don't know who they're messing with.  And women who do fall maybe a bit closer to these roles are victims (see: Doll in Asphalt Jungle).

Otherwise, the movie is a pretty innocuous, decently budgeted film with mostly forgettable songs, a popular set of actors, a decent western-type story, and no small amount of work done to make sure Monroe is seen in an appealing light (primarily by having her in constant need of being in a state of mid-undress and often wet, but with perfect hair and make-up).  Heck, the movie is directed by Otto Preminger who made several movies I quite like including Laura and Anatomy of a Murder (there's a cryptic co-directed by on this movie I'm sussing out).

And, if you're watching, Mitchum's entire relationship with his son is focused on giving the kid guns and coffee - so maybe we have found a guy deserving of that "World's Best Dad" mug.

The effect of the heroes on the raft is pretty great, really, and the scenery - shot around Banff, Alberta and other places in the Northwestern quadrant of North America - is absolutely stunning.  And, of course, there's the "oh, this is clearly a set" portions.  And 1954-standard dehumanizing of Native Americans.

All in all, I'm not sure this is anywhere close to being a Monroe classic, but it did come in the Monroe collection I picked up on Amazon a year or so ago, and I felt like I should watch some of those movies.
Posted by The League at 3/17/2016 12:02:00 PM