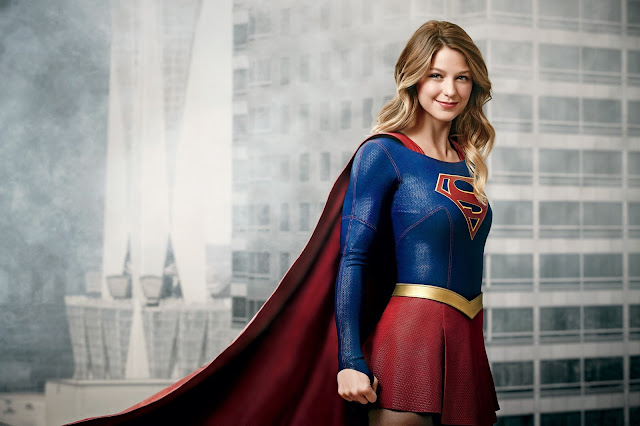 Against my better instincts, I kept tuning in week after week to CBS's entrance into the superhero game, Supergirl.  In all honesty, I didn't think the show would last, so I figured I could stick with it for a season and call it a day.  The show would demonstrate these bits of promise, and then revert back to the disappointing formula blend it seemed the network wanted to enforce - all of which seemed out of step with what might make the show work.

None of what I think has an impact on ratings, and I don't know how large or small the actual audience is for the program.  I hear things about falling ratings, but then I'm told its been renewed, so someone has faith in it.

I was pretty hard on this show when it started.  If I can give it grief, I can say some positive things as well.  And there's been good on the show in ways I've found pleasantly surprising - especially on network TV.


If the show had succeeded in anything - aside from making the Supergirl costume kind of awesome or the insistence on Kara Zor-El as a bright light brand of superhero - it has succeeded in making a show about women as leaders without weighing the show down with unnecessary preaching.  They show-don't-tell when it comes to what it means to be a strong woman of a prior generation who maybe had to get her knuckles dirty in Cat Grant - a character I found fully preposterous for the first two episodes, but who has since been positioned as a mentor and ally rather than an antagonist in the "older woman feeling threatened" mode that I would expect from TV and - given the misery that was the Wonder Woman pilot - not that long ago TV was happily indulging in the trope.*  That's a pretty serious cultural shift in the TV and media landscape.

Sisters are allowed to be sisters who love one another, not who argue constantly or stab one another in the back.  We may have strayed from Alex's original role in the pilot, but it seems to have been all for the better.  We're not hearing how Kara has to be careful about this or that every episode, and they aren't in competition.  They're cooperating (even if the show sometimes forgets its Supergirl who needs to save herself once in a while, not just give Alex something to do by saving Supergirl).

Already the program has shelved the Smallville-esque ending where the characters work through their feelings for the duration of a CBS licensed cover of a popular tune - often in front of candles, which was always an odd touch.  So, yes, we'd get a minimum of Alex and Kara on the sofa talking about what we all just watched for 40 preceding minutes of the 45 minute run-time - but that's all in the past.  The show ditched the "nice guy" unrequited romance between Win and Kara, and generally shaved off a lot of those useless kinds of tropes while pulling together the cast fairly well - even if it's still really hard to know how Kara wouldn't get fired from her supposedly thankless and demanding job running off to the DEO every minute or so.  And, man, save us from whatever is going on with the Maxwell Lord storyline.

If I can appreciate one bit in particular about this as a TV show, it's that this show (and The Flash, as well) don't fall into the TV trap of characters turning on each other permanently over a simple misunderstanding that a five minute conversation couldn't clear up.  So far, Supergirl doesn't let this occur and clears these things up within the same episode, all while maintaining a serial narrative.  It's a much needed improvement over how TV so often works.

The choice to make Hank Henshaw one of my favorite JLA'ers - The Martian Manhunter - has been a huge treat.  As have various appearances from existing Super-mythos, from The Black Mercy to a Khund lumbering about.  And, despite a Bottom Looks Face-Off make-up, it was nice to see Laura Vandervoort working again in Super-media in the wonkily plotted Indigo episode (that still basically works).

This week's episode really stepped into new "Super" territory for me, and not just because of the clever Superman III references as Kara is exposed to Red K (which makes her eeeevil - or, like most people).  It started with a most Super of scenes as Kara comes to the aid of a young girl bullied at school for literally wearing a hand-made Supergirl get-up.   In this era of angry-face Superman darkly fighting dark-vengeance Batman under a perpetually stormy sky (maybe at night?) - I like to think there's a version of Kara Zor-El that's out there that reflects the positive aspects of the Super-mythos.  And - with the rest of the episode's story - that maybe that dark side is something to fight and reject.

The show is still struggling with some of the set-ups that I am sure they wish they'd maybe not tied themselves to in the pilot.  Pitting Kara against the Fort Rozz villains gave them some security in the form of a "monster of the week" structure, but - like The Flash outrunning the need for a fresh metahuman threat each week as longer, better stories presented themselves, Kara outgrew the need for a different DCU alien villain every week, and I half wonder if they aren't going to shelve Non and the Gang in Season 2, as it draws too many questions about "now, where is Superman during all this?" and logically makes no sense that Kara could defeat a herd of roving Kryptonians.

This show is never going to be Mad Men or The Americans, but it isn't that show.  Hell, CBS isn't that kind of network.  So, while I'd always be hoping for the show to be smarter, stronger, better written - it's at least no longer something I'm watching out of spite.

*as progressive as David E. Kelley was considered during his 90's heyday, the pilot felt like a relic from a recent but now passed era.  It's some bitter irony that Kelley's discovery in Callista Flockhart is now owning her role as mentor on Supergirl

I hope you do a post on the Supergirl/Flash crossover. I had a goofy grin on my face for most of that episode but I will say no more.

Hopefully over the weekend. I was given to mad fits of cackling through the whole episode. If CBS doesn't renew this show, I hope it makes its way to CW somehow. They're seemingly cracking the code on how to do this.

They better renew it. I was all prepared to hate Ally McBeal but she's one of my favourite parts of the show.

Whether it was Ms. Flockhart herself who forced a change or smart show-runners, I can't say. But that was one of the best turnarounds for a character I've ever seen.

Without verging into spoiler territory for folks who haven't watched all the episodes I love how Cat Grant is not portrayed as an idiot. This women runs her own media conglomerate, she's not a dumb bunny. I freaking love that!

Yeah, and it's not too divergent from the comics. She was always supposed to be kind of putting up a front but smart when you got past the act. Here, they just morphed it into "she's got her particular ways, and it's challenging, but she's a force." It really works.