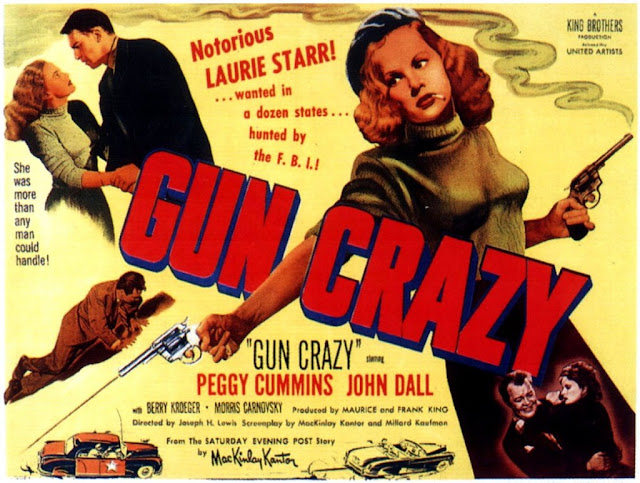 I've lost track of how many times I've seen Gun Crazy (1950).  And, in fact, over the past ten years its easily become one of my favorite movies.  Tuesday night JAL and I met up at the Alamo to catch a screening which was, it turned out, part of a series the Alamo was doing about social issues in movies.  And, of course, Gun Crazy is as good an example of how a good gun owner gets sucked into the issues of a bad gun owner as you're like to see.

The screening was either sold out or nearly so, which, even in a small theater at The Alamo on a Tuesday at 7:30 - for a movie that's now 66 years old - is a pretty good thing.  What was truly surprising was that the screening was of a 35mm print struck in the 1960's, as near as I could tell.

I've written about the movie before, (twice!) and so it doesn't feel necessary to rehash a lot of what's there.  And I plan to read Eddie Muller's book on the movie later this year.

Full disclosure and full bragging - while I didn't attend the Film Noir Fest of 2013, I was fortunate enough to have Jenifer S. in San Francisco who somehow snagged me a post of the movie with Cummin's signature which proudly hangs on my wall at home.  So, yes, I guess I'm a fan.

And, if there's something to talk about that's new, it's how goddamn good Peggy Cummins is in this movie, something that's oft mentioned elsewhere, but that I feel like I've got to drop here.  This was one of her final performances in American film before she returned to the UK, and my take-away is that Cummins was just 15-20 years ahead of her time.  She's channeling the same ray energy Dunaway grabs and channels for Bonnie & Clyde, and the remarkable thing is - the movie seems to know what to do with it.  She's half-crazy, knows she's not like other people but has no idea how whacked out she might be, but Bart (John Dall), her lover knows, but he's so crazy in love with her, it's just going to keep getting worse and worse.

Even in the final scene where she's talking about how they're going to die together, she's turned on, whispering in Bart's ear, getting close to him as he's sinking into the despair that comes with the inevitable end.  If you're looking for an off-kilter but textbook case of the noir Femme Fatale, look no further.

When folks assume the 1950's were a squeaky clean era, I sort of want to point at stuff like this and say "no, over here.  Look."

I'm glad the movie still has its fans, and I'm glad this got a screening of this sort.  It's always surprising what will pop up at The Alamo when you least expect it.

As JAL said as we tipped our pre-movie cocktails:  Here's to bullets and blondes.

It was a lot of fun. Annie's intro is one of my all-time favorites.

I wish I'd been on the ball and gone the previous week to see "I Am a Fugitive from a Chain Gang". The ending scene is forever haunting.

I admit, I've never seen that one. Will add to queue now.