This Moment in History: Astronaut Scott Kelly Returns to Earth! and the Impact of Social Media on Space 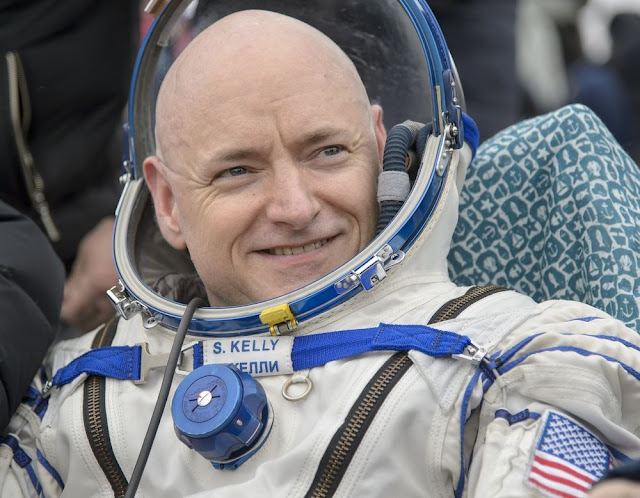 Here's one of the great things about social media:  Broadcast media and the press in general have done a ludicrously poor job of covering the work of NASA.  I don't know if Broadcast Journalism majors are too thick to get why this is important stuff, or space exploration and science is too unweildy for the public.  But, we no longer rely on that media to get the info our eyeballs and ears.  There are dozens of NASA twitter and facebook outlets.  Many of them twitter and fb accounts held personally by the astronauts themselves.  And its not just limited to NASA.  Want to know what Canadian Astro-hero Chris Hadfield is up to?  Check his twitter!

NASA - an organization that has felt the government squeeze more than any that I've seen in the past decade - has had to rethink and refocus their outreach approach.  Since the 1990's, the internet  has made the world more aware of the successes of both manned space flight and our rover missions to Mars.  Television can't seem to be bothered with much more than a 30 second puff-piece about landing a robot on Mars or the final flight of an American space shuttle, but there are lots of us huddled around laptops or abusing our office projectors and killing a few minutes to watch a rocket launch.  I don't know how SpaceX would have evolved without the internet (and it's a work stoppage at my office almost every time Musk's company has a launch or landing).

Through the various channels I follow, I became aware of the Scott Kelly story a while before the launch.  I was aware that Mark Kelly, husband to Congresswoman Gabby Giffords of Arizona, was an astronaut - and vaguely aware he had a twin brother.  But, yes, when I heard an American was going to follow in Russia's footsteps and place one of our own in space for a year, I got very excited.  Russia does an amazing job with its Cosmonaut program, and even in years of faultering economy has remembered the national pride they can have in engineering, science and rocketry if they keep their program going.

Since his launch in early 2015, a lot of us have followed Kelly's social media broadcasts, his television interviews from the International Space Station, his experiments and the overall experiment that is "what happens after a year in space?".  It's just not that it's a circus trick - it's a legitimate question.  We don't really know.  And if we want to think of ourselves as a space-faring people, if we want to ever get beyond our moon, it's something we will need to learn.

I can't imagine the bravery Scott Kelly demonstrated with this mission.  This is the sort of thing you need to keep in mind next time you feel like criticizing government workers for their lazy approach to their jobs.  The man was doing experiments, PR work, running self-diagnoses, EVA's to fix portions of the space station, and occasionally dressing up as a gorilla.

No doubt all of this was stressful.  Even for a trained fighter pilot, which Kelly is, that's still years of training, a year away from friends, family, food options, social activity and privacy.  I cannot imagine.

As I age and perspectives change, this is one of the sorts of things I find awe-inspiring in my fellow man.  Our capacity for exploration without and within is no small feat.  As we map every inch of the planet's surface and no frontiers remain above the waterline, we have two directions to go in the physical sense.  One is to map the vast world beneath the waves and the other is the infinite sea beyond our thin atmosphere.

To make sense of Kelly's work - and hopefully to support next steps for NASA - the missions has been contextualized as understanding what we need to know to get to Mars.  And it is that.  But it's also about what we will need to know as we take our first steps beyond Earth's gravity if we're to see what lies in the rings around our neighboring stars and those beyond.  Kelly is a Lindbergh - someone pushing the limits of possibility, and that's something we can all celebrate and honor.

What's made the journey so fantastic has been that connection - of the photographs sent back from Kelly's lens, his comments from orbit, his ability to share.  We can't all be astronauts and we can't all work at NASA.  But we can share in the experience in new ways and have a connection to the possibilities NASA, JPL, the ISS, our Russian Cosmonaut friends, our Canadian, European and Japanese colleagues all work toward.

Keep in mind - America no longer has a way to get our own Astronauts into space (we retired the shuttle program and have no rockets), so we rely on Russia's Cosmodrome.

If you haven't had opportunity to learn more about Kelly's mission, check out PBS's excellent hour of programming, A Year In Space.  Or, check out NASA TV's coverage (which has been looping for days now).

I look forward to hearing more about what Scott Kelly, his twin bother, Mark, and others have to say about the research as the long tail of the year in space play out.

And, of course, what comes next.  ISS, manned space flight, private companies like SpaceX and Virgin trying new technologies, and our next craft sent to Mars (I think Europe and Russia have a joint project going soon).

One of the things that's true is that social media makes following what's going on extremely easy.  When people ask me "what do you even do on Twitter?"  Well, I follow, like, 10 people I know, and the rest is using Twitter as a newsfeed for stuff I like to check in on.  Don't get overwhelmed by the list below.  It's all just stuff I see go by and check in on when I can.

Keep in mind, NASA is publicly funded by your tax dollars.  So, let your representatives know space exploration and research are important.  If you've felt disconnected from NASA in the past, now you can be an observer.

Some links I follow (please add your own in the comments):