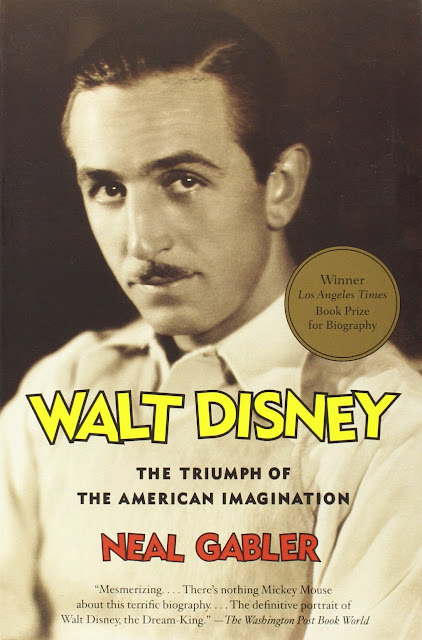 A while back NathanielC suggested this book to me, and after 33+ hours of audiobook, I am, at long last, done.*

I've written about Uncle Walt before, and I've read up on the man and his work in bits and pieces over the years, including The Art of Walt Disney, which is on a shelf about ten feet from me as I type this.  Full disclosure as well - my second job as a teenager was as a fresh-faced "Cast Member" at The Disney Store when it was still a prestige sort of store in the halcyon days of the early 90's (and I could have done far worse.  I learned a lot between the Princess Dresses and Dalmatian snowglobes.).

The name "Walt Disney" is a name that conjures up a wild array of ideas for anyone.  It's a universal brand anywhere in the world, which is really pretty amazing.  As children we love Disney, as teen-agers we get cynical and start feeling clever when we find out that maybe Walt Disney's cartoons aren't the same as the dark and often bloody fairytales which inspired them.  We retain fond memories of cartoons and live action movies, the theme parks and TV shows and everything else Disney can mean.  We wink and nod, no dupes for the product of Walt Disney, right up until we pick up that BluRay or take our kids to another movie or buy that t-shirt, watch anything on ABC, or see a movie produced from a Disney subsidiary making straight up regular movies.

The man Walt Disney has faded from memory in my lifetime, even if the brand prevails.  As a kid, I have a firm memory of knowing what Walt Disney looked like from an early age, meaning I must have seen him on TV playing up his later-career role as "Uncle Walt" - perpetually a late-middle-aged dad-type.  Even the statue of Walt and Mickey before Cinderella's castle at The Magic Kingdom in Florida is that latter-era Walt, the one who had changed animation a few times over, tackled and won mainstream family entertainment at the cinema with both live and animated features.  It's the same Walt who dreamed up Disneyland and founded CalArts.  Then, you see pictures of the young, lean Walt Disney with the intense stare and the prodiguous output and the stories of a hundred failures before he decided to head west and wound up animating a mouse...  that's a different Walt.

Today's true giants come from the tech industry.  There's a reason we've seen real and imagined biopics over and over covering the life of Steve Jobs and one of Mark Zuckerberg.  We go to work, we punch the clock, we go home and watch TV and play videogames and we look at guys like that like aliens.  It's hard to get your head around what they did in their short times on this planet.  It's hard for us to understand the drive necessary would be contained within a single human.

As a biography, Walt Disney: The Triumph of the American Imagination (2006) struggles over its run-time and page count to sort out what sort of man Disney was at his core.  It delves into the prodigious and famous Disney archives, leaving an unvarnished approach as correspondences are cited, interviews reported, memoirs quoted.  It tries to at least capture the impressions of those who stood nearby as Walt Disney reshaped not just multiple industries, formed not just pop-culture, but culture itself - well enough that the company that bears his name has outlived him by 50 years and is stronger than ever.

Author Neal Gabler does not go in for character assassination, nor is he here to simply write a rose-tinted portrait of his subject.  He captures Walt's origins as a child of the turn of the century and the life he led until making his escape by lying about his age and joining the Red Cross in WWI.

A favorite topic of internet rumors and bar-room chat are the political proclivities of Disney, all of which are more complex than a label (which, no kidding.  Reductivism never helped anyone), and Gabler nobly tries to contextualize some of the harsher claims against Walt Disney without dismissing the accusations or apologizing for them.**  It's a thankless task, and I think he grapples with it as well as possible given how simplistically this sort of thing demands to be handled in the press and elsewhere.

The research done to make the book come together is first order stuff, but it still sometimes feels as if what the Gabler does is understand everything around Disney, but leaves a blank space where Disney himself stands.  And that may be the best any writer can do.  It's clear Walt had few close friends, and his family and confidants have had their say in their own memoirs and interviews over the years.  Like politicians or other larger than life figures, we can know a person best by their actions, and that's what Gabler assembles in both chronological and contextual means.

What did annoy me a bit was that Gabler fell into the trap of trying to find one characteristic and drawing everything back to that one point.  True or not, it feels a like a tool to over-simplify any person's personality over the course of a lifetime.  In the case of Disney, Gabler stakes out early that Walt Disney sought to control and shape his world, and returns to this point over and over.  But... what person doesn't try to control and shape their world?  It feels like he's conflating the mechanism for the motivation or energy source that fires the drive.  If we all do this - what was it that - well after he achieved success and fame - kept Walt going?

It's here that Gabler, in documenting a unique individual, can't ever seem to quite get his head around the drive and so goes in for tagging Disney with a quality he can understand in Psych 101 terms.  But of the giant figures out there - the Steve Jobs, the Elon Musks, Richard Bransons - who push the boundary of their fields and create entirely new ones to satisfy their drive and curiosity - what makes these people tick eludes the author as much as it might elude you or me.

While certainly making the argument that Disney was a visionary, I was often reminded of how difficult some visionaries seem to be to work for (again, Steve Jobs).  It doesn't do well for the money men who want safe, sound investments in things they can't understand, and can't find it on their ledgers to welcome risk for intangible gain.  Employees get to loggerheads with Walt, and those close by get burned if they fail to keep pace or fail to see where the vision is headed.  Gabler is more or less forgiving, or a non-partisan observer - of Disney's rougher edges, and they are very rough indeed.  But with the benefit of distance and hindsight, and from those early days where it was working (the Snow White segment is absolutely engaging), Gabler is able to paint a complete picture of what Walt was up to, and how changes and the folks baying at his heels for money, recognition, reflected glory, etc... all felt like drag on a rocket trying to reach unimagined heights.

Still, the book gets real, and for anyone who wants to maintain a vision of Walt as someone who would be the same smiling Uncle-type figure over dinner and drinks that you saw on The Wonderful World of Disney, you're going to be disappointed.

Despite whatever minor quibbles I had with Gabler's approach, I highly recommend the book.  Gabler's century-spanning work brilliantly documents how Disney rose and rose and broke free from the most likely of all outcomes at every step.  Paired with his brother Roy, a huge figure in the book, constantly wrangling Walt's lack of business acumen as he sought to try new things, the journey feels amazingly nerve-jangling for something where we know the outcome at every step.  That's some damn good writing.

As the book is about Walt and less about Disney animation, we don't get the appreciation that came later for many of Disney's works which broke even or performed poorly on a first release.  There's no tracing of how Walt's products became staples of Western culture, something familiar to everyone as Bambi, Snow White, etc... are shared as readily as tales of Santa Claus and the Easter Bunny.   And the criticism doesn't shift to present-day thinking on the films (Sleeping Beauty is now considered a Disney visual classic - even if the story is too thin - but was a disappointment at the time).

Give the book a shot.  It's a fascinating look at the 20th Century from a tiny sliver of America, but one with which we're all marginally familiar.  And if you don't know the basics of Disney as man and enterprise, I cannot recommend a better volume.

**when I see Millennials reposting letters by Walt Disney with his reasoning for why a woman can't be an animator on tumblr, of course it's disappointing to know that was the case, but it (a) demonstrates a fundamental lack of understanding of how things worked for your great-grandparents and (b) shows how you're not quite getting all the strides women have made socially in the past 60 years, so give your forebears some credit for breaking barriers.
Posted by The League at 3/05/2016 11:42:00 AM