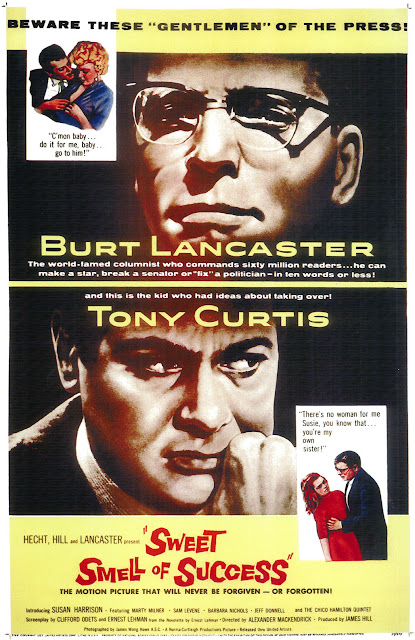 This one has been on my hit list for a couple of years now.  I recorded it off TCM way back in December and finally pulled the trigger and watched it.

Sweet Smell of Success (1957) is one of those movies like Sunset Boulevard, The Hustler or On the Waterfront that came out during a certain window of moviemaking that I think people associate with Eisenhower-era positivity, thanks to TV re-runs and a deluge of Disney movies in their youth.  Of course, Noir sort of blows the doors off all that.  But a lot of Noir gets caught up in incredible situations, with dames on the make, gangsters, long-game scams.  But sometimes something like this - stylized though it may be - gets at something a bit beyond the grift or the crime.

Tony Curtis plays Sidney Falco, a press agent for live acts in the Big Apple.  Things are falling apart for him as he can't seem to place a story with any of the major columnists, especially J.J. Hunsecker - played with menace usually reserved for dictators and ganglords by Burt Lancaster in a pair of horn-rimmed specs.  J.J. wanted Falco to break up a brewing romance between his sister, Susan, and a jazz guitarist, Steve Dallas.  With the two planning an engagement, Falco sees doom for his own business and begins wheeling and dealing, going to Hunsecker with his problem and the two pair, their styles different but need to manipulate people and situations spinning into darker and darker territory.

This was one hell of a movie.


The action of the film takes place not entirely in real-time, but it does take place within about a 36 hour period, a sort of "dark night of the soul" "test of our portagonist" that works so well in film when done right,  The ticking clock of events as Falco struggles to pull together the complicated webs, playing the characters like a piano, all while knowing he can't outplay Hunsecker.

The movie gets tossed around in Noir circles, and it is that.  Maybe not as clean and obvious with its lack of detectives, but someone getting in over their head, their hubris, their sex getting them into a situation that's spinning out of control as the common denominator - often taking out casualties along the way - it fits that bill to a T.

Maybe giving some credence to why the movie is an anomaly of the era, it seems Sweet Smell of Success got some poor notices outside of New York (which surely recognized itself in the film), and the box office was a disaster.  It's not entirely clear to me, but it may have been a bit much for the audience as an A-Picture in its unrelenting cynicism (something audiences don't do particularly well with now, and it's not like cynical pictures don't often become an end unto themselves).

It didn't not pass my notice that when Falco finally does do something decent, it leads to everything unravelling.

It clearly didn't damage the legacy of either Tony Curtis of Burt Lancaster, and eventually was re-discovered and put on a bit of a pedestal in some circle.

In addition to the main stars, the attached talent is worth noting.  The screenplay was originally written by Ernest Lehman who handled everything from North by Northwest to The King and I to Black Sunday.  The screenplay that was shot was mostly by Clifford Odets, a curious figure from the HUAC era, the supposed inspiration for Barton Fink, and the guy who wrote Clash By Night.

The script is freaking amazing, by the way.  Some of the best dialog I remember hearing in a movie in a long time.

The director, Alexander Mackenzie, clearly took the hit on the film's box office troubles, as his career seriously derailed after this movie.

Cinematography was by James Wong Howe, who has a wide variety of impressive credits.  But, man, he's on fire here.  Shooting on the streets of New York, in packed bars and restaurants, a world in constant motion (with the notable exception of the first light of day) - his camera is in motion, including some brilliantly subtle dolly work and exploiting elevation in some key shots.  Color me impressed.  And, of course, in beautiful black and white, Manhattan a sea of light pushing against the darkness.

And, hey, you can't complain when the score is by Elmer Bernstein.

This is one I look forward to watching again, and Id write more about it, but I am very, very tired and must go to bed.