Merchant Ivory Watch: The Remains of the Day (1993) 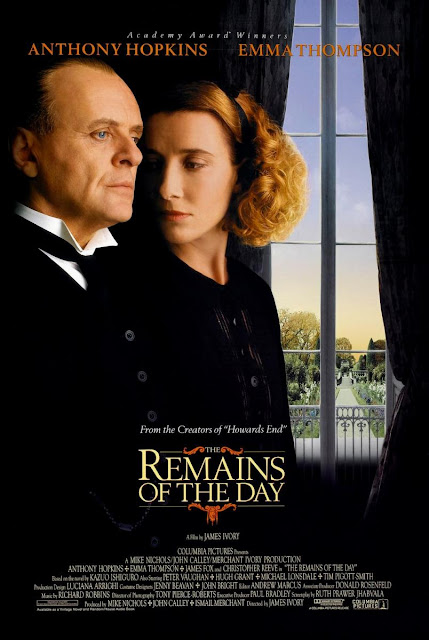 When this movie ended, I said something along the lines of "Well, that was exactly what I expected" and "I think there's a reason that they don't make movies like this much anymore".  But I didn't really mean either comment as a dig, and neither comment was entirely accurate.

Back in the 1980's, UK film concern Merchant Ivory began exporting films to the US with a small burst of success here stateside.  Really, I think the breakaway hit was A Room With a View (1985) - which I've never seen to my recollection - exploded with the one-two punch of Howards End (1992) - which I did see in the the theater during its initial run - and The Remains of the Day (1993) - which I did not, though I do remember it coming out.  If you ask American cinephiles if they like Merchant Ivory pictures, I think they'll say yes, but aside from these three movies, I don't know if any others really got any traction stateside, and by the turn of the Millennium, Merchant Ivory pictures had largely disappeared from the conversation.

The movies were invariably period pieces.  Lots of bodices and top hats and proper manners and class issues were at play.  Great fodder for the English majors out there envisioning themselves in great sprawling manors in the English countryside with manservants and maids carrying on illicit affairs in the... broom closet, I guess.  And they fall in nicely with Kenneth Branagh directed Shakespeare adaptations, Jane Austen interpretations, and all of them keep Emma Thompson working like a dog.*

The Remains of the Day is a mid-20th Century period piece about a butler and housekeeper in a sprawling manor in the British countryside.  They watch over the staff - including the butler's elderly father, still in service - as well as his lordship, who is busily trying to broker peace with Germany as a private citizen as Hitler's expansion into Europe becomes a reality.

The story is told mostly in flashback, and we begin the tale with the manor coming back to life as a new owner moves in, an American played by the late, great Christopher Reeve.  It seems the butler, Mr. Stevens (Anthony Hopkins) recalls him from his attendance and ill-fit at a conference of Old World European gentility trying to broker a peace arrangement in Europe.  Mr. Stevens bears witness to the world making of the 20th Century occurring before him, and takes tremendous pride in playing the part of the perfect butler - always on duty, always perfect in execution of his duty to the point where he becomes a fixture more than a man.

Prior to all this, a Miss Kenton has joined the staff as the housekeeper, herself as devoted to her work and in alignment with Mr. Stevens when it comes to duty.

I don't think I'm giving away much to reveal the movie is about the exploration of how Mr. Stevens' pride in his work and professional demeanor have kept him from perhaps living a full life, from putting action behind ideas or taking chances.  It's a quiet study of a movie, and for the type of movie it is - it's sort of a perfect encapsulation of how one does this.

Referring to my initial thoughts upon finishing the movie - it was what I expected.  The movie was well made, beautifully acted and directed, the plot matched the back-of-the-VHS box description, and aside from specifics, was broadly what I thought it might be: an Oscar-caliber film of a certain stripe of English-Lit aimed period film.

And, I'm kind of wrong that they don't make many movies like this anymore.  Because they likely do, they just aren't cultural phenomena in the same way.  Today's period piece Oscar bait films work out some cultural message by beating up the past for not being as forward thinking as today (unless, you know, you actually check how things are going these days).  And its hard to ignore the cultural force that is Downton Abbey, which I watched one season of before tuning back to Venture Bros.

In general, no, this isn't my usual cup of tea, but I did like it for what it was, and reflecting upon the film, like it all the better in retrospect.  I'm not sure, had I seen it at age 18 I would have entirely grasped what the film was saying except in broad terms**, but it's a well-written, well-imagined film and its not surprising it's survived well beyond the collapse of the film scene of which it may be among the gems.

*in no way is that a complaint.  There is only one Emma Thompson and we must use her where and however we can.