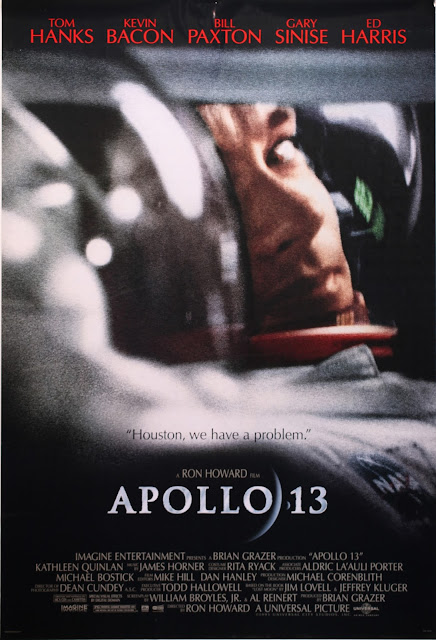 Here's the thing.  I don't think Ron Howard is much of a director.

When I watch his movies, I can almost feel the focus groups and studio notes taken as wisdom.  I shouldn't be able to pause in your movie and say "this scene was written this way because they think I'm a moron".  But, in a Ron Howard movie, that's generally my take away.  He wants to make movies that will be both semi critic-pleasing and still sell a boat load of tickets, and that's a tough balancing act, but one he's made work for years.

In Apollo 13 (1995), Astronaut Jim Lovell, played by Tom Hanks, is explaining how a moon landing works.  And, to make sure all of us yokels in the audience get it, he literally explains a LEM descent to a five year old using toy models.  This is after, by the way, Kevin Bacon (as Astronaut Jack Swigert) explains how he'll be docking his craft with the waiting LEM in orbit using a sex metaphor and a beer bottle and glass.  And, basically, it all works, but it's the sort of thing that comes so close to condescension to the hicks in the theaters that I feel like Oz isn't even bothering to hide behind the curtain.  He's got it open, he's sitting there in bunny slippers working the machinery, and expects me to be so wow'd by the fire balls and green head I'm not supposed to notice.

At least the two examples above are expositional scenes in the movie, because he also conducts the two cardinal of sins of just straight up delivering the information via corny dialog.  Example A is having folks in the crowd say the obvious to the assembled so us dummies can keep up.  "If our hero doesn't flip the floop in the next five minutes... they all die!"  Example B - holy GOD does this movie contain a wide array of folksy metaphors to simplify what's occurring.  "They're gonna skip off the atmosphere just like a stone off a pond!"

The NASA scenes in the movie are most riddled with all this.  Sometimes it feels like you hear expositionary bursts just shouted from random technicians in Mission Control.

I'm not even getting into the cheese factor of Howard's set-ups for characters and stuff like Gary Sinise being a sad astronaut watching the rocket take off as the music swells.

But, you know, my biggest fear is that this is what it takes for movie audiences to embrace a film like Apollo 13.  Certainly The Martian over-simplified a lot of the book, but it never felt quite as silly as Apollo 13's approach and just hoped you'd keep up at certain points.  And, of course, its not a patch on American Myth, The Right Stuff.

Of course metaphor and simplicity is required in all of these films, but somehow, it feels like Ron Howard is so delved corn and cheese, he's a snack product.

What's frustrating about all of this is that the story of the real-life Apollo 13 is a fascinating narrative with a bucketload of interesting characters.   And Howard does convey the situation in ways that make sense and basically work.  If you want to give Howard credit for anything, the entire event had been largely forgotten by the time the movie came out, but thanks to the movie, now - almost as far away as the event was when it actually occurred from the movie's release - everyone now remembers and knows what happened during Apollo 13.  That's the power of storytelling and film.

Hell, the one part of the movie that totally works for me is when Ed Harris (playing Flight Director Gene Kranz) is in the meeting room with his top guys and starts laying out the problem.  If you're in management, we've all been there.  Everyone yelling opinions, everyone a hammer seeing a nail.  But you break down the problem until you can work on it in parts, even if all you know are the symptoms and impact, and can't quite sort out the issue.

The movie seems well researched (I do not work at NASA.  I don't know anything.), and the detail is exquisite.  It's also neat to see the pay-off of the hundreds of hours spent in flight as the crew captured real zero-G for the movie with some help from a NASA jet and fancy flying.  But the NASA detail is fantastic.  And the appreciation of the efforts of the Apollo 13 ground and flight crews is spot-on.

A few years back I had the rare and odd opportunity to attend a panel of the Apollo 8 Astronauts, of which, Jim Lovell was a participant.  Hilariously, I just Googled the lecture, and apparently the camera was just behind me.  I know this because - that's me who stands up in front of the camera and completely blocks the view.  Sorry about that.  But Jim Lovell is an amazing guy in real life, too, and no less gracious about the all-hands efforts of NASA.

Whenever I mention I liked The Right Stuff and The Martian or I think space exploration is both a good idea and interesting, people throw this movie at me.  Unfortunately, it intersects with how I was feeling about movies in the 1990's, and this movie is absolutely a prime offender for some of Hollywood's worse best practices of the era.

This is maybe the third time I've seen the movie, and every time I check out somewhere after they pass the moon, which is supposedly the highlight of the movie - but there's something about the pacing and foregone conclusion of the movie that keeps me from really staying invested.  And I'm a guy who has seen The Thing at least 10 times, and the last time I saw it a friend made fun of me after the movie for seeming so wigged out at about the 2/3rds mark for that one.  You can know what will happen and still build tension.

I will say that to the film's credit, it was shot in the original olive green mission control center where all this actually happened. When filming started, JSC had moved to the blue, modern computer mission control center, and the old one was designated a historical landmark. Those flashing buttons and dials the actors were fumbling with took us to the moon.

That's amazing. Watching that, I was like "man, they REALLY went crazy making sure this looked bonafide". That must have been something recreating the action that occurred right in that room.