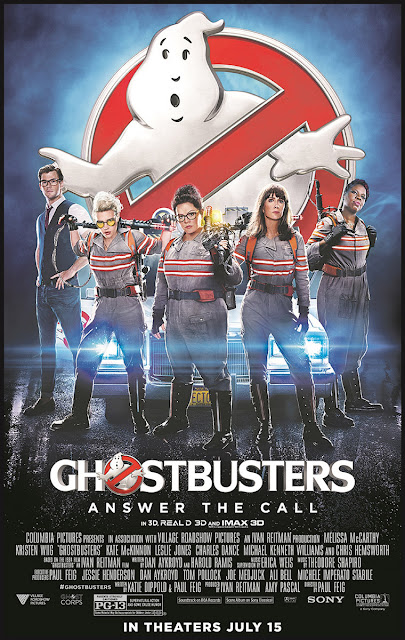 
If you've been keeping up with Saturday Night Live the past, oh, 15 years, it's been pretty clear that the real talent has not been on the male side of the crew since the departure of Will Farrell, especially.  From Rachel Dratch, Amy Poehler and Tina Fey taking over the show to Kristen Wiig and Maya Rudolph, to Kate McKinnon, Cecily Strong and Vanessa Bayer, and - more recently, Leslie Jones.

And, I am a big Kristen Wiig fan.  Maybe not as big as I should be, because I still haven't watched Skeleton Twins or Welcome To Me.  But, there's no time like as soon as I've finished watching the other two Bourne movies.  Not only am I a huge fan of angular girls with high cheek bones, Wiig's comedy sensibilities strike me as some of the most creative and natively hilarious of her generation, but since I seem to be the only one watching The Spoils of Babylon and The Spoils Before Dying, I may be alone in this opinion.  You tell me.  Plus, you know, Gilly.

But taking on something as big as Ghostbusters that seems to run on basic cable no less than every Saturday of the year, sometimes twice, that so many people know so well, was a massive challenge, no matter who was at the wheel.

Probably the biggest changes to the movie, once you're over the fact these Ghostbusters lack penii, is the tonal change from a sort of "making it in New York workplace comedy" to "superhero origin story comedy".  Where the original Ghostbusters was a sort of workplace buddy gag dealing with billing for services, the EPA, worrying about triple mortgages on houses to pay for the equipment, getting fired from cushy researcher gigs...  This one just kind of blows through all that stuff to have fun with the super science, gives us an evil opposite for our heroes, and has a big, big Avengers-style finale.  That's not a dig, that's just what this does that feels so different from the original.

Look, I won't pretend this movie is as good as the 1984 original.  It's nowhere near as quotable, for instance, and the pacing is absolutely frenetic.  There's no overworked Ghostbusters staring into space with cigarettes hanging out of their mouths here.  And it doesn't seem to know what to do with the fact it wants to both be and not be the original, which is constantly piling up in the movie from cameos to call-backs.  It feels far more like *product* in the way an Avengers movie or name your franchise.  And it is absolutely trying to kickstart a franchise, there's absolutely no doubt (stay through the credits).

There was a 300 page script in here somewhere, and you can feel the character arcs roughly in place, but there's no question, for example, in the first movie that Venkman was the default main character with the only real arc.  Here, there's an arc introduced but barely explored for Wiig's Erin Gilbert, and a storyline about a failed friendship that's more or less abandoned until it comes into play in the climactic moments in a way that made me literally pause to think "huh, that was underdeveloped for such an important character moment".  And it feels like so much of the film was either left on the cutting room floor or in earlier drafts of the script.  Even bits we see during the credits that would have been totally welcome during the actual movie.  Ex:  Matt Walsh and Michael Kenneth Williams are nearly cut from the film (and both have proven how good they are, so...).

You'll hear criticisms from a range of folks. from paid critics to my wife thinking about the movie as she ate an Oreo at home afterward, saying that the movie does what so many comedies do, and that's cease functioning properly in the third act as the movie needs to wrap it up and get on with the plot.  Which, in this era of CG FX, you sort of realize that the minute the actors need to be hitting marks and making predictable, repeatable moves, a lot of what really works about the comedy in the first half - which feels improvised and spontaneous in some of the funniest parts - goes back to the/ a script and the laughs kind of dissolve.

Which is to too bad, because the original Ghostbusters had some of the most memorable lines and bits during the face off with Gozer.

None of that means the movie doesn't work.  It does.

Firstly, the movie is fun.  I actually published this originally without saying that, and yet it was the foremost thought on my mind walking out.  "Man, that was fun!" I thought.  And it is.

What is funny is pretty funny indeed.  The characters aren't done in medium shot but in close-ups.  This is a movie about four personalities coming together to form an unlikely supergroup that will defeat the forces of evil.  And it's those four distinct personalities that make up the comedy that works (plus, actual Avenger Chris Hemsworth demonstrating some shockingly successful comedy chops).

McKinnon's character feels a bit as if the script was thrown out the window and she's just been told to play the hyperactive, overclocked mad scientist who could have just as easily been on the side of the bad guys.  McCarthy is the heart of the team, all focus on this ghost business.  Leslie Jones is the Leslie Jones of the team and I don't know how else to describe her.  And Wiig is the uncertainty, the head, the one who lost faith before, and knows this is a narrow path their on (but her delight at seeing a real ghost is a great moment).

Had the original never existed, of course this one wouldn't either - but I think people would have nicer things to say about this did it not beg comparison.  But of the angles that could have been taken en route to restore the franchise, for the 9 year olds whose moms will take them to see this movie (and there were more than a few in there), I'm probably glad this was the way they went rather than, I suppose, the once-upon-a-time supposed Seth Rogan route which would have ended predictably in ways that work for the young male audience between 16 and 30, and but serve near no one else.

The ghosts are a good mix of properly spooky and funny.  Yes, we get Slimer, and he's as funny here in his own way as he ever was in the original.

I guess in terms of "If there's a sequel, would I go see it?" the answer is yes.  There are a lot of things I'd hope they'd get their hands around better for the next go-round, but I genuinely enjoyed the characters, the set-up, etc... And if the cameos were a bit distracting, eh...  I liked seeing the old faces doing something new.  After all, that's a tradition I'm quite used to as a Superman fan.

It didn't hit it out of the ballpark, but it was a good night out at the movies, and had lots of new ideas for Ghost Busting on many different levels.

We're giving it a thumbs-up. 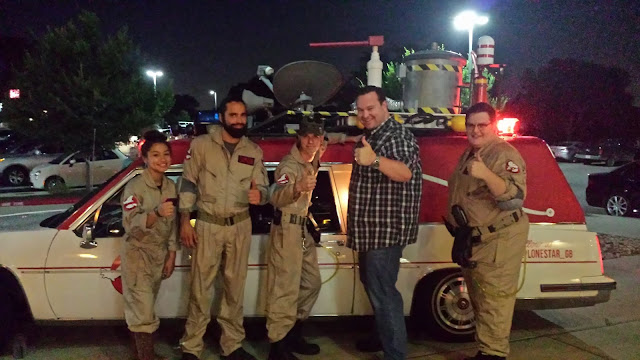