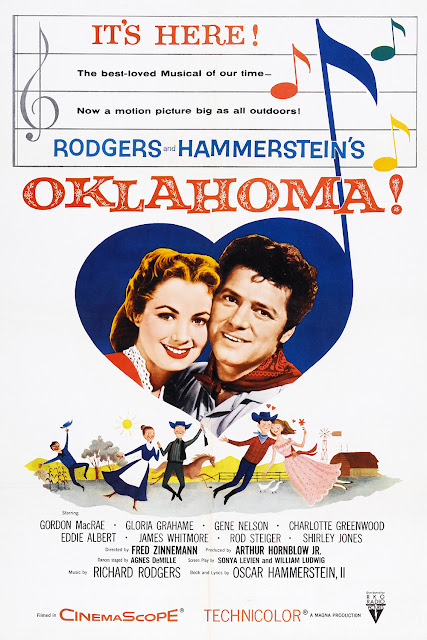 The first time I saw Oklahoma! (1955) was in Spring of 1994.  I was sitting on my bed/ couch (it's hard to explain, but anyone who ever lived in Jester at UT understands), when my roommate, Peabo, burst in through the door.
"Oklahoma! is on TV!  Right now!"
"Y'okay."
And we turned it on and watched the whole thing, complete with commercial breaks.

I don't know that I saw it again for a few years, but I saw a rendition of the stage play at the Paramount in Austin circa 2000, and we own the DVD and have seen it at least twice.

Jamie's actually from Oklahoma (the state, not the musical), and her mom was a big fan of the show, so when Jamie arrived, part of the package was a baked-in enthusiasm for the music from the Rodgers & Hammerstein production.

Tuesday night Jamie and I hit The Paramount Film Series for the first time this summer (along with Cousin Sue) to see the movie on the big screen.

Whether you've seen Oklahoma! or not, it's a bit like Westside Story or other big musicals - you've heard the big hits whether you know that's where they came from or not.  And in the case of Oklahoma!, the big hits are nigh every song in the show.  So, even as bits in a commercial or co-opted elsewhere, you've heard 'em.  The album has been a #1 record in both the US and the UK (circa 1957), certified multi-platinum and is consistently in production.  If you don't know the music, I assure you - your parents do.

A lot of it's pretty damn catchy.

What's weirdest to me about Oklahoma! is the utter disparity between the sunshiney image of the movie - complete with upbeat music, sweetly naive bumpkin characters, hokey imagery - and the really pretty dark story at the middle of the play, as well as some pretty adult content.  In short, you absolutely could not perform this play in a middle school without a lot of cutting.

In short - our handsome male lead, Curly (a cowboy), digs on Laurey (a very young Shirley Jones), and they're playing hard-to-get with each other.  When Curley shows up to invite Laurey to a "social" that evening, she decides to play the game by agreeing to go with Jud Fry, the hired hand, instead.  Well, Jud, it turns out is a weird stalkery type who lives in their shed, and who intends to have Laurey or, you know, burn the farm to the ground.

But, yeah, Jud is more or less every creepy "Nice Guy" story you hear rolled up into one Rod Steiger.  There's a whole song about how sorry he feels for himself, and he's a big fan of waving weapons and guns to threaten/ impress other dudes.  And, of course, when he thinks he has his opportunity with the girl he's been coveting, he's creepy as hell about the whole thing.  Sexually rejected, he vows revenge.

Other storylines include a scandal-ridden, post-botched-cosmetic-surgery 32 year-old Gloria Grahame playing a 17 year old farm girl who has suddenly obtained 32 year old Gloria Grahame's Gloria Grahamness, and, lo and behold, she's suddenly very popular with the fellas.  And she's happily making time with all these dudes, believing she's in love with whomever she's with.  Meanwhile a guy who is in love with her has returned from a rodeo believing he's obtained the money needed to win her hand.  But he is literally too stupid to hang on to the money and get married.

I'm not positive, but I think they end the movie with an agreement to try for an open relationship (no judging), and consummate the relationship.  So, good for them.

The movie is also a bit about how being too naive and playing with the psycho who lives in your shed is just problematic.

People unfamiliar with the genre may not be hep to the "classy dance number" break that appears in musicals of the era.  Singin' In the Rain has the "Broadway Melody"/ oh-my-god-Cyd-Charisse portion, and you can always point to odd break outs in films like On the Town that have these weird dream sequences in the middle where we ditch the tap and jazz for some modern or ballet.  Oklahoma! has a similar portion, stretched out to incredible length and basically showing us that Laurey never was going to be one of the more fun girls you were going to meet.

Nothing about the actual history of Oklahoma is present in this movie, and you certainly won't hear mention of either Native Americans nor the fact that this was supposed to be "Indian Territory" until white people decided they'd like to claim that, too.  The only non-lily-white person is a "Persian" peddler.