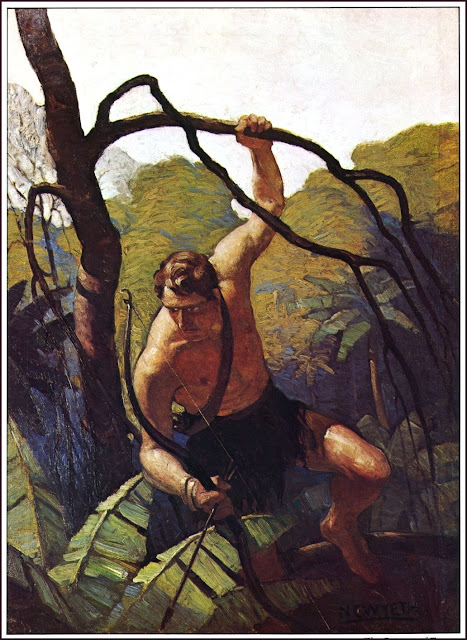 
While crossing from the U.S. back to Paris, heartbroken, Tarzan meets a French nobleman and his wife (of Russian royal stock), and finds that a Russian duo is harassing the pair seemingly pathologically.  After defending the young Countess' honor, Tarzan makes an enemy of Rokoff - the brainier of the two Russians.

In Paris, Rokoff seeks his revenge, leading to a misunderstanding and a face-off in which Tarzan must prove his gentlemanly honor during a duel.

From here, he joins the French secret service and goes off on a lengthy adventure in Algiers that - while interesting - really feels like ERB padding the page-count and - at first blush - not fulfilling the mission of Tarzan as either wild man in civilized society nor man among the wilds.

But, the arc here is an interesting one.  Once you get past the choice of language and the PC minefield of casting judgement on non-WASP-y cultures, the book is Tarzan stepping through cultures from Paris' salons to the more dangerous cities of Algiers to the nomadic tribes of the desert.  Tarzan is then put on a boat and sent to Capetown, but is lost overboard.  The return to the Western Coast of Africa both gets his back into his element (maybe a little too coincidentally) and gives Tarzan a chance to meet up with a friendly tribe of natives and have a very, very different experience than that of the first book with the locals.

Once you deal with the book as it is, it's interesting to see ERB move from his depiction of (and Tarzan's impression of) the black people of Africa as uniformly sub-human.  Tarzan makes friends and joins a tribe of sympathetic natives and sees them as possibly his new culture.  There's also the portion of the book which has inspired a feature film or three (and part of the original Tarzan movie, I'd think) with a lost City of Gold and the weird devolving humans who dwell therein.  And, of course, a return to his family of Apes.

ERB, should you want to write him off as a straight-up racist of 1913, also has some choice words for the "avarice" of "unique to the white race" informing a sort of unstoppable greed.  And while it's tough to say he creates three-dimensional characters of any of his non-Anglo characters, and he does hold the common perception that European society was the most evolved, it's an improvement from the first books' portrayals which... anyway.

At each step, Tarzan considers his place among the culture with whom he's currently socializing, and the novel considers his unique plight - that of a man with no people to whom he can truly relate while seemingly fitting in with each culture.  For a character we think of as a smiling oaf in a loin cloth sexing a lost tourist, it's an interesting take (and kind of the opposite of John Carter finding a home on Barsoom).  Tarzan ponders the meaning of civilization and society as he drifts among the different cultures, seeing valor in the raw honesty of the wilds and duplicity among humans, Rokoff always the worst of all.  But the closer to nature, the less that men spend their time obsessing over clothing and status symbols, the more comfortable Tarzan feels.

Of course, as the focus of the book is always on the humanizing effect of Jane Porter on Tarzan, that thread is followed even as Jane is not with Tarzan until the final pages of the novel.  More-over, Jane is subjected to hardships in this book that make her shipwreck in the first novel seem like a summer picnic.  Still, the promise of Jane, who crosses all barriers for Tarzan and who loves him for all that he is, is what salvages Tarzan before he's broken.

It's certainly not to everyone's taste, it's a product in many ways of its time, but it's also more than the simple adventure story I expected to follow on the heels of the first novel.  ERB sees nothing as too coincidental, and that can raise your eyebrows from time to time, but you can't say it doesn't push the novel along.