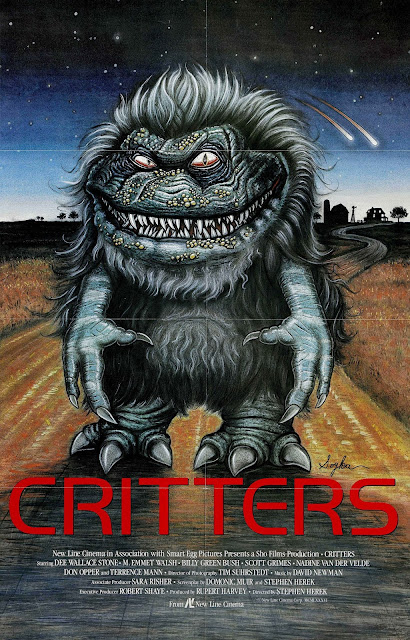 Our story:  an intergalactic paddy-wagon is bringing a herd of space-crooks to a space prison when something called "The Crites" escape.  Space Bounty Hunters are dispatched to find them.  Thanks to the lo-jack put on the paddy-wagon the Crites have stolen to make good their escape, the Bounty Hunters track them to Earth, specifically Grover's Bend, Kansas - home of broadly caricatured dopes. In particular, the Crites land on the farm of a nuclear family with a sort of 13 year old son and teenage daughter, where somehow the mom is Dee Wallace.  And the rest of the movie is the paired storylines of the bounty hunters blowing up a small Kansas town for no reason and the furballs that are the Critters terrorizing a family in a farmhouse.

The name talent in the movie includes M. Emmet Walsh in a small part as the town sheriff, Dee Wallace Stone as "the mom" (shocker), and a very young Billy Zane in a small, pointless role as the daughter's new boyfriend.

I dunno, you guys.  I know people have a certain affection for this movie, but it feels like something to be endured more than watched.  It's not scary.  It's not funny.  Well, it has this one time the Critters swear, and it's kind of funny.  The movie is weirdly derivative and doesn't care.  It sets up the potential for a hilarious, ongoing joke in making one of the bounty hunters look like a famous pop-star, and then does absolutely nothing with it.  The Critters themselves aren't exactly invulnerable, so as far as threats go, they don't seem like that big of a deal.  Just like really upset cats.

It's a hacky movie, intentionally or otherwise.  I suspect they were basically trying to have fun making a movie, and I hope they did.   But somehow this movie spawned three sequels.  People love it.  I am not one of those people.

I really don't feel like spending additional minutes of my life thinking about this movie.  But it's so indicative of so much of the shit that was on the shelves of the local video store when we were kids.  Cheap, half-baked stuff intended for an audience that wasn't going to get away with renting slasher movies but didn't want to watch "kid's" movies, and were up for a creature feature.  I mean, there were a lot of these sorts of franchises in the post Gremlins world (and none of them ever topped the sublime cartoonishness of Gremlins 2).

This movie was exactly as bad as I remembered it. Don't ask me why I watched it so much as a kid. My only excuse is that I may have liked the Critters mode of transportation (rolling around like furry soccer balls). It was also one of those movies that ran constantly on HBO when I was little and we watched a LOT of HBO. My apologies to Ryan - I actually thought it would be more enjoyable-BAD movie than just boring.

I will take up my keyboard to defend, if not the honor, then the entertainment value of Critters. I loved this movie as a kid. I remember watching with my cousins while visiting, and falling out of our chairs at the scene where one of the Critters drops the F-bomb. A few years ago, I convinced my wife to watch it with me. Her enthusiasm was not unlike mine when she asks me to watch "13 Going On 30," "The Wedding Planner" with her, or worse - "Amelie." It had been 20+ years since I last saw it so I didn't know what to expect. I thought it held up remarkably well for what it is. My wife did not share this sentiment, and in retrospect I burned up some credibility which had taken some time to build up. ALTHOUGH -- she did laugh out loud when the critter cussed.

I think you make some fair criticisms. The movie should never have really been marketed as a horror movie. Maybe that's some of the problem. It doesn't fit neatly into one genre. It's part action, part comedy, and part sci-fi horror. I found the movie to be funny, especially the intergalactic bounty hunters, and when I was a kid, it was a little scary. I was 11 or 12 when the movie was released and that age group was really its key demographic. Part of the appeal at the time was thinking about what I would do in the case of a critter invasion. I kind of think the movie would have been better if, rather than one kid, the story featured a group of friends a la Goonies or Explorers (I for one would have enjoyed Explorers with Critters far more than those Looney-Tune aliens which ruined the movie).

I don't remember there being any expectations whatsoever for this movie. And like so many films for which you have no expectations, you find yourself enjoying far more than you may have otherwise.

Anyway, I'm fine with agreeing to disagree about liking Critters. BUT... to compare or rate it as inferior to Gremlins 2? No, sir. I will not abide such an offense to reason.

I seem to remember a certain childhood fascination with the bounty hunters in this movie on the part of this blog's author. I guess you don't want to be a space bounty hunter any more?

@jake - yeah, it really does feel like they could have done more. Given the kid a pack of friends to help him fight the Critters. Been funnier all the way through. It just wasn't working for me then or now.

@jason - yeah, I had that passing thought as I was watching the movie. Like "it seems like I thought these bounty hunters were cooler" - but, man, it's hard to see it now. Maybe my fascination with bazooka toting aliens has just fizzled to naught.