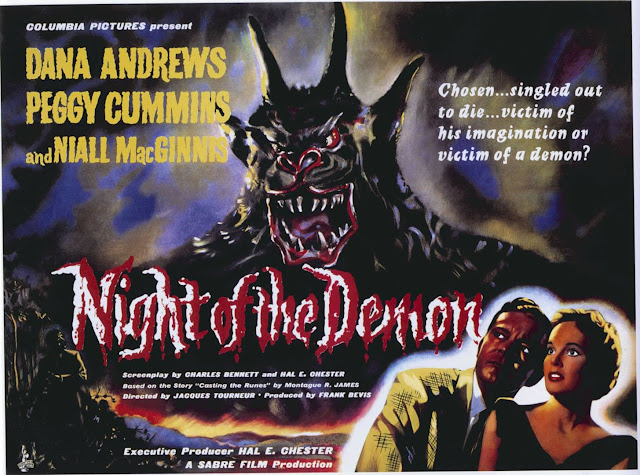 Back when I was a little kid, Jason and I had a few books on movie monsters, and among them was the book Super-Monsters by Daniel Cohen.

On the cover of the book was a really pissed-off looking monster that I kind of assumed was an off-brand Godzilla-type thing (I didn't know the word "Kaiju" until college), and didn't think much about it except that I wasn't sure what movie this monster was actually associated with.   Also, I don't know why my folks were like "hey, look, a snarling hell beast!  The kids'll love it!", but this was the 1970's and back then we were still raising our kids to be ready for anything. 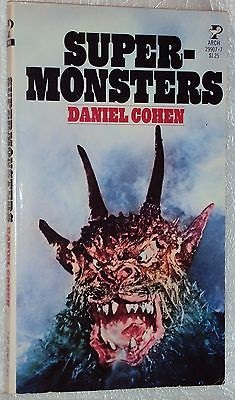 The book had short entries about the plots of various monster movies, and I can trace my interest in those strange creatures to this book.  Even if this same book led me to believe Young Frankenstein was a very odd, badly made Frankenstein movie until I finally  saw it and clued into the Mel Brooks canon.

But I had no idea who the monster was on the cover of this book until about 5-10 years ago when I stumbled across some information about the British horror film, alternately titled Curse of the Demon and Night of the Demon (1957).    Last year I tried to watch this movie on or around Halloween, but realized I was exhausted and didn't pull it off.  And then my DVR went crazy and I lost the recording.

But this year, SimonUK brought it over, and with Steanso in tow, we all gave the movie a whirl.

The movie has a lot to recommend it.

It co-stars Peggy Cummins, which this writer thinks is an A-OK idea, especially as we've only ever been able to see her in Gun Crazy and nowhere else (so far).  The plot is about a sort of charismatic cult leader who is draining people of money to pay for a lavish lifestyle, but who seems to have the ability to sic a 30 foot fire demon on people at will.

Dana Andrews plays an American psychologist and skeptic, looking to get to the cause of a colleague's death who has a run-in with the cult leader, who curses Andrews to die in a matter of days.  Cummins plays the niece of the prior victim and much less of a skeptic when it comes to all this supernatural mumbo joumbo.

We do see some magic at work, but it's not clear what we're actually seeing.  Is it an hallucination?  Is it hypnosis?  Magic?  There's a logical explanation here!

It's not exactly a horror movie so much as a supernatural thriller, I guess.  But, man, I would not have wanted to have seen that demon as a kid.  I would have lost my damn little mind.  Especially in the ending scenes.

All in all, I really liked the movie.  It's well shot, Dana Andrews is a decent leading man, it's got a great villain, and a plot that winds and threads well enough that, as SimonUK pointed out, you really don't know what's happening or how this will wrap up.  It's uncertain territory.  And that's a positive.

There are two cuts, and we watched Night of the Demon rather than Curse of.  It won't surprise you too much to learn that - it seems - the movie was originally shot without any FX like you see in the final version, and it was meant to be all the more psychological, but someone needed to see a monster (not that surprising in the go-go days of the 1950's monster craze), and we got a hell of a monster unlike almost anything else in movies until CGI.

I LOVE this movie. It's my favorite movie monster of all time and the movie is arguably better without it. Glad you dug it.

So, is "Curse of the Demon" the cut with NO monster?

Simon rec'd "Cat People", which I have not ever watched. Anything else?

Oh my gosh, I saw Cat People when I was young (80s, but still), and it was probably one of the films that scared me most growing up. I kind of want to watch it again knowing that surely it can't be that scary!

So, I've never seen either Cat People - the 1980's version with Annette O'Toole (I should get on that. I like Annette O'Toole.) or the 1940's version. My assumption is the Tourner did the earlier version as I remember a 1980's hip director did the more recent version. But it's good to hear it's scary!

Whoops...didn't even know there was an 80s version, but I see how that could be confusing. No, I grew up on 40s film, so I'm referring to the 1942 version. The 80s reference was to my childhood, slightly different than your own but the same concept applies. My mom wouldn't let us watch tons of contemporary stuff. Little did she know how much I learned from old films.

It was a highly entertaining movie! It had a great mix of spookiness and camp. Playing on the fact that witchcraft can be disguised as coincidence, the movie did a good job of making things like windstorms and damaged books feel genuinely creepy. Also, Ryan made lots of popcorn, and for that we were all grateful.

Curse of the Demon has cut content, but I think the monster is in both. Wikipedia says "Cut scenes included a visit to the Hobart family farm, a trip to Stonehenge, and snippets of the séance scenes and conversations between Karswell and his mother."

As far as Tourneur, I'd recommend The Comedy of Terrors, I Walked With A Zombie, and Cat People. I've heard good things about Out of the Past.

And the Paul Schrader's Cat People is worth seeing, too.

Unrelated, but whatever, you should watch The Uninvited with Ray Milland if you haven't already. It's terrific.

Oh, "Out of the Past" is phenomenal. Very different vibe from "Night of the Demon", except for the constant feeling of dread and tension.

I saw they have "The Uninvited" at Vulcan, so I'll pick that up next time I'm there.

I'm making a list of horror movies to watch that's gonna take me past Halloween, so I'll be adding all of these.