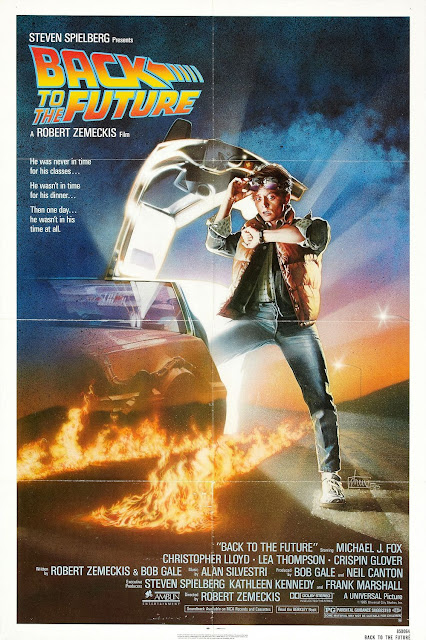 I remember coming back to school after the summer of 1985 and a good chunk of my classmates were nuts over Back to the Future (1985).  I'd seen it in the theater, but even of our own family, I think I liked it the least of the four of us.  But I was a little surprised how much my peers liked the movie, and over the past ten years I've been even more surprised to find how much not just my own generation still celebrates the entire trilogy, but Millenials love the movies, too.

The movie was on cable last weekend, and I gave it a spin for the first time in a long time, more or less to figure out what I'm missing when I watch the movie that everyone else is seeing.  I want to make it clear:  this is my deficiency, not anything I think all of you people are stupid for liking.  As near as I can tell, there really isn't anything wrong with the movie.  And Lea Thompson's many, many iterations of Lorraine over the trilogy - heck, within just this first movie - is pretty impressive.


I like bits of Back to the Future.  Some of the dialog is pretty good, I like the goofy mechanics of the Flux Capacitor, and I guess I like the overall plot.  Full confession, as a kid probably more than as an adult, Marty's mom having the hots for him squicked me out.  As an adult, I'm just squicked out by Marty's plan for getting George and Lorraine together includes "and then I'm gonna get handsy with my mom, and you're gonna punch me, and that's gonna equal love, not tears or anger."

This is a complicated movie.

Straight up, probably my biggest hang-up is that I never cottoned much to Michael J. Fox.  I don't know why.  There are just some actors who annoy you, and back then, whether it was Family Ties, a show I watched entirely for Justine Bateman,* or The Secret of My Success - I kind of just slogged my way through.  I was not overly charmed by the antics of Alex P. Keaton.

As a kid, I also just got irritated by movies where "lots of little things go wrong".  As an adult, occasionally, I find this kind of thing great, if done well.  But watching the final scenes of the movie with the car stalling, the extension cord falling, etc... and I remember just getting annoyed at movies and TV shows where this was part of the comedy.  Hell, then and now I have an incredibly short amount of patience for lots of things going wrong in real life.  But give me a faulty hyperdrive in the Millenium Falcon that keeps dying, and that's just good stuff.  I don't know why.

Combine the two issues, and you have the scenes like Marty plugging a line of Pepsi products even a high schooler in 1985 would have known didn't exist in 1955.  It's just...  eh.  I mean, I knew this at age 10.  It just felt dumb then.  I don't know how it feels now.

And, of course, I never really cared that much about any of the characters, but that's a realization I don't think I came to until this viewing.  If I don't care about Marty - and I don't, he's kind of a weird poochification of a 1980's-teen - then I don't really care much about whether or not he ceases to exist.  I mean, I kind of care, because Marty is the main character and we're following him, but...  yeah.

You get the idea.

Anyway, here's to the eventual remake.