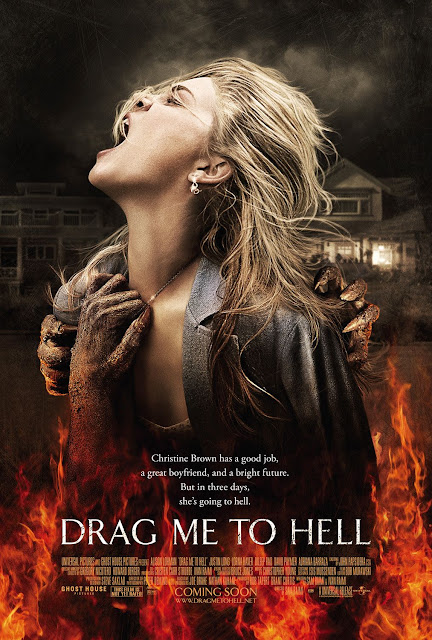 Despite endorsements from multiple trusted sources, somehow I'd never gotten around to watching Sam Raimi's post-Evil Dead horror film, Drag Me to Hell (2009).  Which is too bad.  I wish I'd gotten to it sooner.

If you're a fan of Raimi's other horror work, this is more or less in line (and possibly in continuity) with the world of Ash and the deadites.  I was surprised how much it shared both aesthetically and in spirit with the Evil Dead franchise - mixing the horrific with the grotesque with slapstick.

I don't want to oversell the movie - it's not a life-changing experience, but it was perfect for a bit of Halloween spookiness and mayhem and everything it was trying to do worked for me.  And, coincidentally or otherwise, the movie feels a bit like an old school Universal horror film in some ways, which is all right as the movie was at least released through the studio.


Our protagonist is Christine, a loan officer at a bank.  She's sweet, maybe a little too nice for her own good, but good at her job.  She's got her eye on an assistant manager spot, but she's got competition from the new office sycophant.  She's got to look tough and decisive, and just at that moment, an old gypsy woman with an overdue mortgage has come to beg for an extension (I mean!  Gypsies!  That's how you know it's a Universal film!).  Christine tells her no, and, after a few steps I don't really want to spoil, she's cursed by the gypsy woman.

From a fortune teller, she learns she's been cursed and in 3 days, she'll be taken to Hell.  This, of course, is not what she wants, and things begin to escalate as she tries to find a way out.

I haven't seen lead actor Allison Lohman in anything else, and it seems that shortly after starring in this movie she took some time off to have and raise two kids, but she's back working and that's good news.  She's really very good in this movie, turning what could have wound up as unsympathetically saccharine or bambi-like naive and making it something with a bit of iron, the character's path feeling organic as the horrors mount.

Heck, even Justin Long found his sweet spot in this movie, and I don't like that dude in anything.

It's not a movie for everyone.  Christine's desperation leads to some... ahem... interesting choices that you either laugh about under the gallows, or you're going to just find a little disturbing.  I'm sure Raimi intended it both ways and was cackling the whole time he was filming some of these scenes.  After all, this is the director who had his characters cutting off their own hands, dead girlfriends performing dances, and dead moms in the basement.

If I felt it was a bit like old school Universal Horror - not monster movies, but just a scary movie - it's that the movie is about the quest to overcome a gypsy curse and all the steps along the way, the twists and turns and descent from normalcy to finding yourself in a seance with a witch, her sidekick, a fortune teller and a goat.  Our hero is an innocent, her lover is a doctor trying to find logical explanations, and it's an unfolding horror - not just a guy in a mask killing people.

Anyway, I found the whole thing a grotesque good time.  Maybe not exactly scary - but the tension in the film keeps you involved.

I love this movie. Saw it twice in the theater. For my money, David Paymer asking if he got blood on his shirt is one of the top 5 moments in any Raimi movie.

About a year ago Syd kept saying something the sounded like she was talking about "The Lamia", which amused me to no end.

I'm a bit surprised this is not streaming.

Yeah, I have no idea what the calculus is to get something to streaming, because last Halloween it WAS streaming (and I missed it). But pal SimonUK had a copy and we were in business.

I really dug the Lamia in concept and execution. Just good stuff.