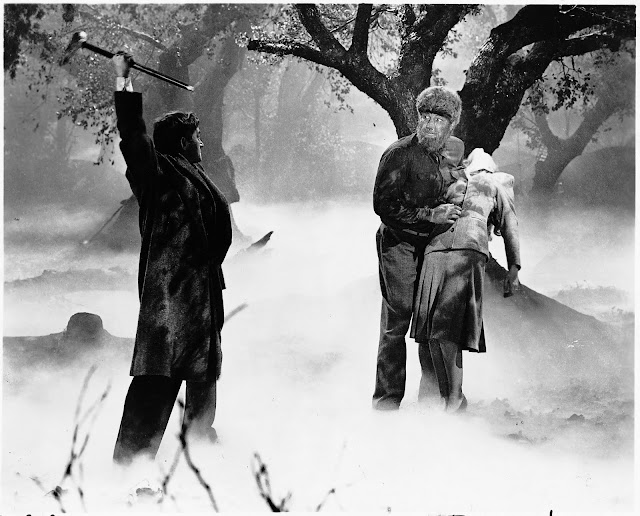 TCM was on a Universal Monsters sprint last night, and after the frighteningly monstrous loss by the Cubs in Game 3 of the World Series, I needed to chillax for a bit with some creepy mayhem.  I watched the last twenty minutes of The Invisible Man (a movie I always give short shrift.  It's really good.), and then moved into The Wolf Man (1941).

The Wolf Man is a movie of highs and lows.  It sets up a great mythology from whole cloth and the modern-age denial of werewolfism as the result of some psychic shock suffered by our tortured protagonist.  Of course all of these things are beats every werewolf movie since has imitated.  It contains Claude Rains and Bela Lugosi - even a young Ralph Bellamy.  I'm in the camp that likes the monster make-up, but the Wolf Man scenes are better in concept than execution, never really feeling like much more than a large guy manhandling people instead of a monster rending them apart.

It's kind of strange that Universal's 2010 go at rebooting this franchise was such a mess, because - this is a very simple movie.  Seems like it should have gone better than it did (I only really liked the bits in the medical college and then in the streets of London - and that felt more like a Landis-homage than anything to do with this movie).

It's certainly a crucial movie for getting monster movie history, and I still think it's very well realized.
But there's an elephant in the room by name of Lon Chaney Jr.  And that elephant isn't much of an actor.  I really want to like Chaney Jr., but he's playing on the same screen as Claude Rains.  There's just no comparison here, and his character spends most of the movie hitting on an engaged woman (I think I found your real wolf here).  I wish the scenes with the Wolf Man felt more full of menace, but no matter how well shot and well-lit those scenes are... man.  It looks like a hirsute lumberjack on a bender.