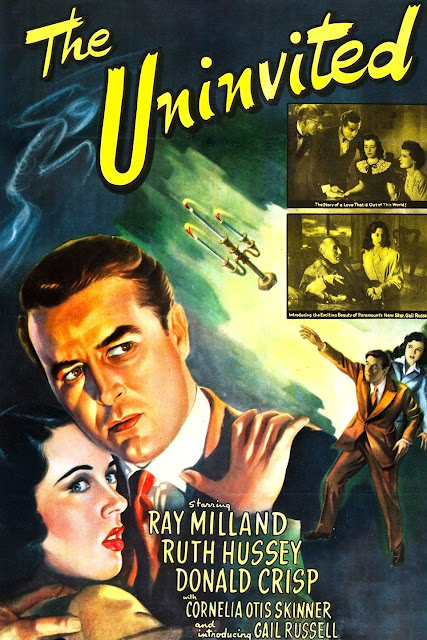 Our story:  A brother and sister from London (Ray Milland and Ruth Hussey) are vacationing in a quaint coastal town and find a lovely house, clearly unoccupied for some time.  On a near lark, they decide to give up their London lives and purchase the house.  It is sold to them by an older gentleman who's granddaughter was a child in the house when her mother fell from the cliff.

No sooner do they move in than, late in the night, the sound a woman wailing begins to echo throughout the house.  Soon, they begin investigating the history of the house, trying to figure out their situation and - as the granddaughter is now a fetching 20 year old, Ray Milland starts getting friendly with her.

The movie operates like equal parts investigation and spook-fest.  It's at it's best when the hauntings are in effect, creating a truly eerie sensation via inexplicable sounds and occurrences in darkened rooms - something utterly uncanny but relatable and terrifying.  When ghostly apparitions do appear, they're really pretty effective, but it removes the mystery and we're still really far from Ghostbusters-librarian-level FX, but still really captivating.  Just not as scary as the unseen.

Arriving about two decades before The Haunting,  the film almost seems to point the way out from drawing room thrillers to supernatural tales that didn't have the weight of monsters and mad scientists - this is a classier breed of ghost picture, and it works well.

As it is a puzzle wrapped in a mystery and smothered in secret sauce, I am reluctant to give much more away.  But I would recommend it for a good "date night" spooky movie.  There's enough here to win over someone who may like Gothic Tales but isn't enthused by the usual Halloween content.  It's not got the fun camp of House on Haunted Hill, but it does have the veneer of the drawing room mystery about it.  And, I think, some genuine chills and points the way toward so many things that came afterward, from seances to do some detective work to dark family mysteries that must be uncovered.

I like these type of haunted house movies where the people investigate rather than run around helpless. The Changeling with George C. Scott is another good one of this ilk.

Yup. Jamie and I were just talking about "what's the point of the movies where someone gets scared by something and then runs around not getting killed for 85 minutes?" I like me some story in there somewhere, not just something pushing my panic buttons for the duration. I know many people enjoy those movies but... not me so much.