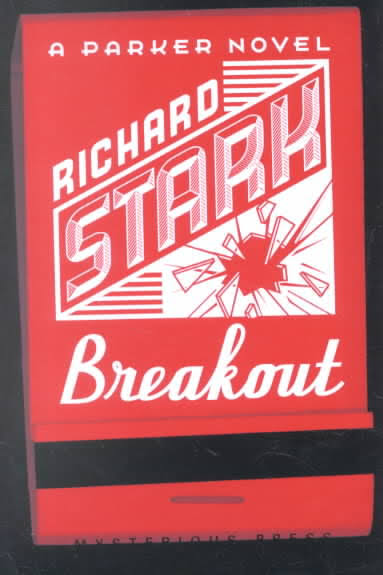 
Somewhere on the plains, I guess in the Midwest, Parker attempts to rob a pharmaceutical operation, but an amateur mixed up in the heist means something goes awry and Parker finds himself in jail - his record, left over from his stint in jail under the name Ronald Kasper (a throwback all the way to The Hunter), provides the only clue to authorities as to who they've got on their hands.

Stark crosses over into talking about race for the first time since the awkward 70's Blaxploitation riff of The Black Ice Score, perhaps a bit ham-handedly, but not without reflecting a mostly-buyable situation in American prisons where inmates cluster by race.  No one is going to accuse Parker of progressive politics, but race isn't something he preoccupies himself with - getting a crew together to plan a breakout, however, regardless of melanin levels, is something he can focus on.  Everyone else can comment on the cultural issues.

By the halfway point, Parker and Co. are out (I won't spoil how), but are trapped in a nearby town, and wrapped up in a potentially lucrative heist in a former armory converted to a jewelry wholesaler.  And, of course, things get complicated.

The further along the Parker novels get, the more Stark abandons the original rules set out for Parker, his ruthless approach to who he'd work with, etc...  From early on Stark was fascinated with how human nature could interrupt the best-laid plans, that our personal agendas, foibles and eccentricities were what brought us up short.  Over time, Stark clearly softened a bit, those issues and agendas losing their edge and becoming maybe a bit more suburban-relatable, an echo of more comedic writing and maybe more grounded characters less screen-ready.

Parker, by this point, is nearly a cypher.  He's the one without any of those hang-ups, a machine going through the processes of the heist.  He's the true north that gives the reader the perspective of seeing how straying from the plan can lead to disaster.  And, really, that's one of the big take-aways of book after Parker book since The Hunter, and a constant in every subsequent volume.  Your personal agendas are going to fuck things up.

Here, Stark paints Parker into a barren landscape where there aren't enough shadows or crawlspaces, nowhere to go to ground, and so every mistake is of graver consequence.  The book might end as yet another caper-gone-wrong for Parker if we didn't get the last sentence or two of the novel and the idea that Parker knows his time is coming, he's due for a fall, which the subsequent novel picks up on thematically.

It's an interesting twist this late in the series that Stark no longer sees Parker as invulnerable or invincible.  He, too, can fall, whether it's his own mistakes or those of the company he keeps.  A perhaps melancholy twist from a writer in his later years.
Posted by The League at 10/03/2016 12:05:00 PM