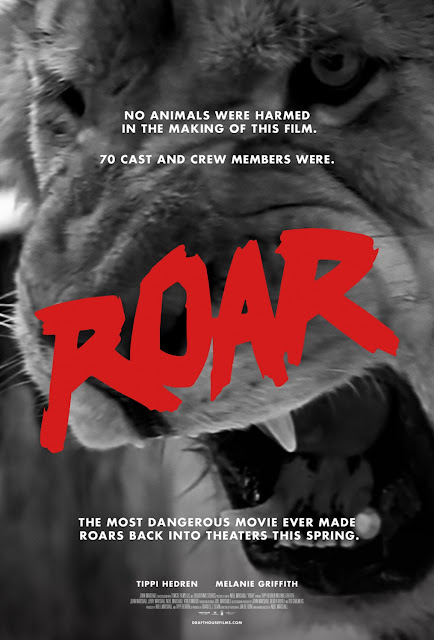 I won't lie - the movie itself is barely watchable, has a moral lesson that defies nearly everything you see on screen and certainly what you read about the making of the movie (Melanie Griffith had her face kinda raked off by a lion, but the surgery must have gone well if looking at Melanie Griffith is any indication).  The only decent acting comes courtesy Tippi Hedren, which, oddly, has the impact of making her kind of disappear into the background of stilted line delivery and goddamned gigantic lions everywhere.

They spend quite a while setting up the story, which is basically - scientist is doing some sort of research in Africa where he's trying to study big cats, and somehow that means he needs to live in an island house with lions, tigers and panthers constantly coming and going.  His semi-estranged family comes to see him, but they miss each other between the house and the "airport", so the family enters the house and decides to open all these barred windows and doors to let some air in, and... whoops.  Here come the lions for which they are in no way prepared.

Cue 30 minutes of people being chased and manhandled by an endless sea of lions looking at them a bit how your housecat looks at a bug crawling across the floor and you don't know if he'll catch it and kill it, play with it for a while - taking it apart, or just ignore it.

I don't know if I've ever seen a movie that both did a worse job of making its point and made it so obvious that this movie was impossible to make but they did it, anyway.  Not too many movies have line delivery cut short by a random heard of lions running by and knocking over the actors, or make it feel like you may well see an actor killed for being next-level foolhardy.

I've done some minimal reading about the movie, but it seems everyone agrees "maybe we shouldn't have done that".  Especially as the movie tanked, likely as oddly juvenile for adults and absolutely terrifying at the same time.  It took years to make, it's got all the cast and crew injuries to account for, and it proved that people can make absolutely terrible decisions toegther.

It's a scene, man.  In some ways, you absolutely have to see it.

The good news is - if you have Time Warner Cable of TCM on Demand, it was a TCM Underground selection, and it's available on demand at the moment.  You have no excuses.  Watch this horror show unfold.

My understanding is that Tippi Hedren now disavows keeping big cats as pets while also running/ owning a big cat sanctuary in California.  If it's anything like our own Austin Zoo, a lot of people get big cats and then can't keep them and they wind up somewhere with chainlink fencing.  So, good for her doing her bit for our furry, terrifying friends.
Posted by The League at 10/06/2016 11:29:00 PM

Good grief, man. Those people were out of their effing minds. How was no one killed? How did they get past a week of filming without asking, "gee, is this movie really worth people getting maimed or dying?" I mean, it wasn't like they were making "Citizen Kane," "All the President's Men" or "Do the Right Thing."

And why has it still not taken hold that keeping large predatory wild animals as pets is generally not a good idea. I see these videos on youtube of people who have huge pythons and crocodile monitors, which are basically somewhat smaller Komodo Dragons as pets. I mean, I grew up intent on being a Marine Biologist (because I thought it meant being Jacques Cousteau), so I get it - animals are awesome, but is that a good enough reason to own an animal that can seriously hurt or kill you or someone else? Did they just watch Miami vice and think "hey, if Don Johnson can have a pet Alligator named Elvis and be cool, why not me?"

By they way, did you see the video from a few days ago of the guy in Montana right after he was attacked by a Grizzly?

I have a pretty primal fear of large cats, sharks and bears, which I just embrace and consider healthy. Ever since seeing the otherwise dull "Legends of the Fall", I've been pretty sure I was going to die by being eaten by a bear, which I have avoided by remaining indoors. The one time I went outside, I came very close to making a bad decision around a bison, but it all worked out.

I'll look up the grizzly video. I haven't seen it. But it is also my living nightmare.

I looked on youtube for some footage of the movie and it turns out the entire film is posted there at present. After watching a few minutes throughout, I'm shocked not only by my aforementioned concerns, but by 1) how ham-handed the film's message is delivered, and 2) what a magnificently bad actor Noel Marshall is.

Also, being a person of average size, I kinda assumed a big guy like you would at least slightly less frightened of large predators than the rest of us. No judgment, mind you.

A friend of mine posited an interesting theory a few years ago. He suggested the reason we are so afraid of being eaten is because just before dying somewhere in our mind we realize we are going to end up as shit, and it terrifies us. I thought he was just trying to be funny, but there may be something to that.

The video I mentioned is just the guy describing the event in the immediate aftermath of the attack. My parents live in Ennis, MT about 1/2 hour from where this happened. It's a place called, no joke, Bear Creek. It's not well known outside of locals, but it's a beautiful wild area, and well known bear country. I've hiked up there before and took my kids sledding there couple years ago. And I had bears on my mind the whole time.

Here's the story and video:

Getting mauled by a bear or lion isn't going to be any less painful for me as a big fella. I'm not sure it's better or worse, but it's not one of those things that's going to just bounce off. It's gonna be a 1200 lb. animal shoving claws into my skull. If anything - I kinda suspect I might lay there longer bleeding out after getting mauled. I am not confident in my bear-fighting abilities.

I did watch the video, and, yeah, that's a man of steel right there. Good on him for making it out! And I hope your folks keep their trash in locked bins.

My folks have good friends from Anchorage and I made the mistake of making a "getting eaten by bears joke" and - indeed, a friend of theirs had been eaten by a bear. So, no more bear-eaten-by jokes from me!

I lie. I will always make jokes about getting eaten by a bear.

Yeah, I guess little guys like me imagine what it would be like to be 6'5 and assume we'd be like Brock Lesner or a Bond henchman; basically an unstoppable badass who would frighten even large animals by our mere presence. So... it's not like that?

The advantages and disadvantages of being a larger human mostly balance out. I like being able to help people, lifting things for people or reach things on the top shelf at the grocery (I am asked to do this about every 2nd visit), but flying in coach sucks and I have to shop at specialty clothing stores. I know it's a natural deterrent from getting into fights, and I haven't thrown a punch in anger since middle school, but in my young-adult days, I could always tell when someone was sizing me up to see if they could start a fight with the big guy, but I was always able to talk my way out of it with a laugh or whatever. Basically, I always, always have to put on a face that says "I am not a threat", especially in my current working environment (librarians are not exactly alpha-dogs barking at each other for top dog status).

I hated this movie. It's a 7 minute Looney Tune stretched to feature length. And the guy, Tippi Hedren's husband, has one of the most annoying voices I've ever heard in a movie and he's ALWAYS YELLING. The story about the movie is far and away more interesting than the content, which is a mess.

Yeah. The fact that no one told the lead actor in this movie "you sound like a 13 year old whining about not getting to go to the pizza parlor with his friends" did this movie no favors.

I will say - yes, I would love to learn much more about the making of this trainwreck.