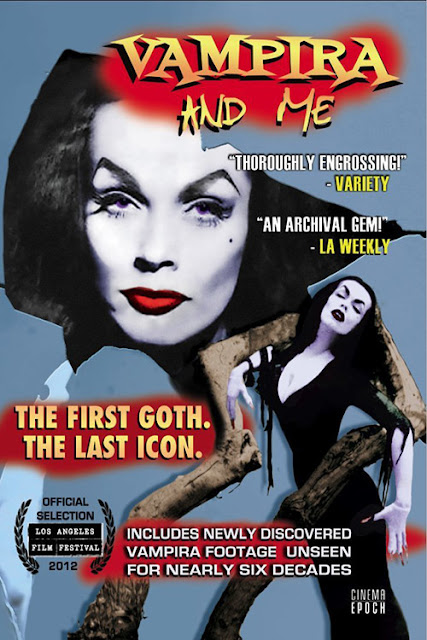 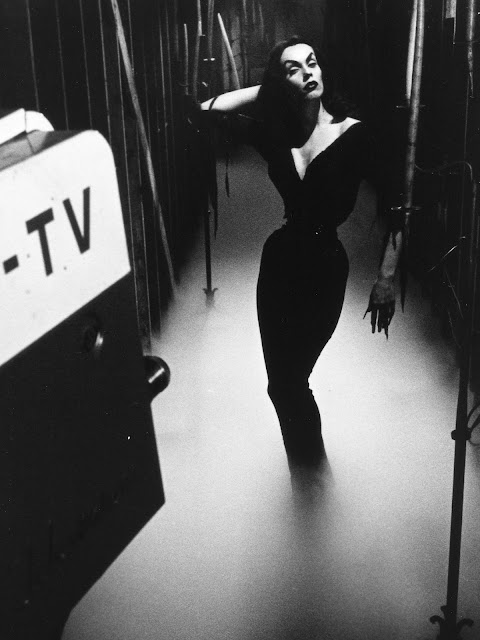 During the mid-to-late 1950's, Vampira was a local TV horror hostess in Los Angeles, played by model/actress Maila Nurmi, and, yes, before you ask - Elvira's oeuvre and much of her schtick was an echo of Vampira's work 20-something years before Cassandra Peterson put on her own slinky black dress.  And, yes, if you saw the Tim Burton film Ed Wood, Lisa Marie was playing Nurmi in the film.  And, yes, that's because Ed Wood directed Plan 9 From Outerspace, in which Nurmi/ Vampira appears.

Writer/ Director R.H. Greene befriended Nurmi sometime in the early 1990's, and managed to interview her well before her passing in 2008.  The 2012 film uses good bits of the 70-odd minutes of 90's-era interview, and it's clear, Greene - who narrates and tries to construct Nurmi's story - has some self-awareness of being seen as a hanger-on (if, indeed, one can be a hanger-on to an impoverished figure lost to pop culture), but enough affection for Nurmi that the film never feels exploitative, but  like an explanation of Nurmi, even as he occasionally questions her statements and tries to piece together the reality of her story.

It's clearly a challenge.  Aside from the period where she was in the spotlight - her path to becoming Vampira wasn't a direct line, and after the show evaporated and the character was no longer in demand, Nurmi more or less disappeared not just from cameras but maybe a bit into her own delusions and into poverty.  The film includes genuinely odd examples of photos taken of Nurmi in the years after her show's cancellation - including police photos after she was attacked - and an audio tape that sounds not unlike someone who is tuning in and dropping out talking into a microphone.

It's a zero/low-budget affair, and curiously personal, but as Greene never delves into self-promotion, sticking to explanation, it's definitely a heartfelt effort, an attempt to do right by Nurmi.

Structurally, it's a bit odd.  There's copious use of copyright-right free footage that illustrates ideas but isn't directly related, but due to the nature of live TV in the 1950's, there just isn't much existing footage of Vampira doing the thing which made her famous.  He does get interviews with a few folks, from Dana Gould to LA punk-scenesters, but only uses the audio, sticking to libraries of footage over which the audio is played.  The only star of the film is Nurmi - who does appear in her golden years during the taped interview portions, and no one is getting more presence in the film.

It's always hard to patch together a life story, and so the film is mostly concerned with showing - first - the rapid and shocking rise of Vampira, who was intended to fill dead-air time on local TV in LA, was never recorded (the show was live and never recorded), and wasn't really broadcast outside of her region.   And yet, she received national press attention and became a semi-regular guest on big national TV shows and appeared in a film or two.

And, of course, the film tracks the inevitable fall from grace and what it did to her.  And, her rediscovery in the late-80's and 90's from the punk and goth folk.  And, yeah, a mercifully brief discussion of Nurmi's lawsuit against Cassandra Peterson for infringement (something you feel bad about for both Nurmi and Peterson if you're familiar with the story).

There's a question of who was Nurmi versus who was Vampira - something the public didn't seem to want to know or consider.  Vampira was the only thing that existed, and in many ways, for Nurmi, that became her reality.  What happened to her as Vampira was no longer in demand, and then forgotten, clearly impacted her at her core.  And while Greene doesn't dwell on how folks in LA seem to go a little bonkers once their stars fade, Nurmi's descent seems particularly harsh.

There's also some haziness around her reported (self-reported and otherwise) relationship with actor James Dean, and despite Greene's let-sleeping-dogs-lie approach to her version of the story, you're left wondering - what was the truth there?  Because it feels odd, and you kind of wonder what she's told herself over the years and what she knows plays well with people who know there was a relationship there of some sort.

The film does a great job of arguing Vampira's impact on pop culture and how maybe she had been exploited and unfairly forgotten (but then again, so is so much of pop culture).  And, of course, the cost of believing that those halcyon days of success are bound to return.

It's not an amazing film, but the personal nature of the movie (something about which I was initially deeply skeptical) actually helps it quite a bit.  It's a friend making sure someone who is passed gets their due.  And for the limited resources available, he does a stunningly good job of making his argument and helping cement the memory and legacy of both the character and the person under the make-up.
Posted by The League at 10/02/2016 11:49:00 AM