Astronaut and Senator John Glenn Merges With The Infinite 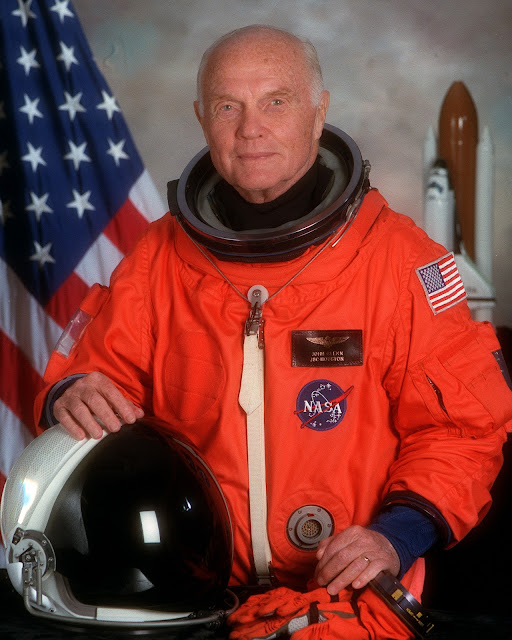 Astronaut and United States Senator John Glenn has merged with The Infinite.

Truly one of the giants of the 20th Century, John Glenn was part of the Mercury 7, America's first manned spaceflight program.  He had served as a Marine in two wars and as a test pilot and would remain a Marine while working with NASA. He would become one of the most famous names in space exploration before continuing in public service as a US Senator, elected in 1974.  He would leave the Senate in 1999.

As an astronaut, Glenn was the first American to orbit the planet, orbiting the Earth 3 times before plunking down in the Atlantic, proving Americans were on a par with the astounding Russian space program, and setting the stage for the Gemini and Apollo missions.

As a kid, thanks in part to the film The Right Stuff, we spoke the names John Glenn and Chuck Yeager with reverence.  These were the guys who lived the lives we dreamed of but didn't even aspire to.  Even in college when I'd hear Glenn was associated with some political decisions I didn't agree with, you still said "well, man, he's John Glenn.  I assume he knows what he's doing."

How the man was not elected President, I will never know.  Bad timing in the Reagan-era, I guess.

In the Fall of 1998, I was recently graduated from college and running a distance learning broadcast studio at the University of Texas.  News came down that NASA was sending Glenn back into space to test the rigors of space flight against the physiology of older adults.  Whatever the excuse, man, it was amazing to see Glenn back in the suit, showing America how it could be done.  I talked the instructor who was teaching at the time of the launch to let me pipe in a broadcast of the take-off, mostly because I wanted to see it, but he must have wanted to see it, too, because I watched it on my monitors while the space shuttle took off on the screens up in the classroom.  No one said a word until they were safely out of the atmosphere.

Glenn lived to the age of 95.  We will not see his like again in my lifetime.

From the outstanding film The Right Stuff, played here by the always excellent Ed Harris:

It's a cliche, but in this case, it's really true. Will we ever see his like again? I'm trying not to be an crotchety old-timer. I know the world is changing, but where are the guys who were out on the edge like Glenn, risking life and limb for national honor/glory (not personal), pushing the boundaries of technology and exploration? Perhaps we've reached the summit of what's possible until we make another technological leap that allows us to explore other planets. I don't know. But when my dad was a kid, everyone knew who Chuck Yeager was. Who are the heroes now? I mean, the Mount Rushmore variety? Kanye? Caitlyn Jenner? Trump? I don't know.

Scott Kelly is the closest we've seen since the Apollo era, and I expect that we'll be following the Mars explorers in the next couple of decades. But it's so hard to imagine from today's personalities who will be remembered. Someone, surely, but no one with such an epic personal story.