Okay. Time to talk a bit about "Westworld" - A non-definitive discussion. 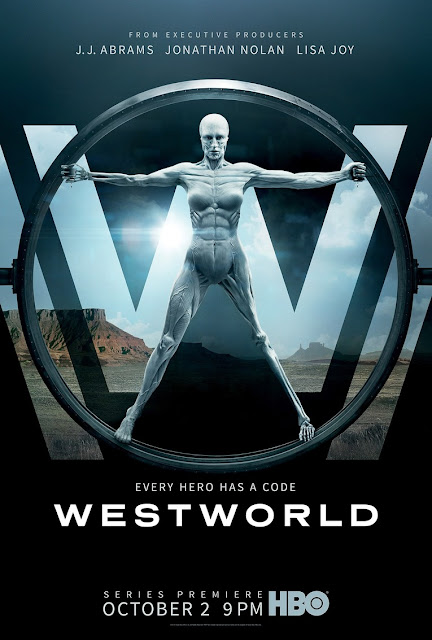 Note:  I'm going to talk about HBO's 2016 series, Westworld, as a whole.  If you're avoiding spoilers, this is not the place for you.

There's a great deal to like about the 10 episodes of HBO's sci-fi series, Westworld.  It's been interesting to find out how many people haven't seen the original Westworld film by Michael Crichton - a name which is pobably just an echo to Millennials but which was a hosuehold name through the 1990's.  I'll cop to having not seen (or don't remember seeing) Futureworld (1976) or the TV series Beyond Westworld (1980).

I am sure the original 1973 film felt like futureshock at the time, or maybe sci-fi silliness to many.  The first time I watched it back before high school, which would have been the late 1980's, 70's hair-stylings aside, it seemed to work very well as a thriller, even if it didn't seem to run deep with the complexities of Blade Runner or other AI films.  Well into the 1980's, our relationship with technology and computers wasn't as everyday as it's become, and fiction treated computers a bit like the genie's lamp right up through the late 1990's.

What the movie does that still holds up is create an adult theme park that is both impossible, yet seems like something that people would be up for whether we want to admit it or not if the wild success of Las Vegas is any indication.  It's a world of sex and violence with only the most minor of repercussions as one fulfills fantasies and indulges whims in a familiar place, but one separated enough from our own day-to-day that you'd lose your bearings.  And steeped in the inherent violence of the filmic west, it's a world in which you'd be more likely to shoot first and question later.


Whether the film aged well or not from a technology standpoint, the story of that movie still intrigues.  The robots break for reasons never explained in the film, rampaging through the park, murdering any living people they come across, both in their respective themed areas and down in the bowels of the park's operations.

The film shows hints about what's happening, and the 2016 TV show seemed to expand on the few clues given in Crichton's movie as to the why's and wherefore's of the disaster, the final scenes in Episode 10 bringing us to the start of that very bad weekend at Westworld of 1973.

The show tipped it's hat at the film while also not just providing us with a carbon copy nor requiring any deep knowledge of the first film.  We got the man in black, we got the two younger men (one of whom had been to the park, and one who hadn't).  But all that is a red-herring within three episodes as all took very different paths.

Had the show run for a single season, I think that's what we could say and draw things to a close.  "Here's why the robots went berserk."  But we've now been promised a second season, and I can't begin to guess what they'll do, if they feel any need to reflect on the movie again at all in the future.

What drew me into the show was, yes, of course the premise of the experience of the park itself, which had not had a chance to live up to its full potential in the film of Westworld (see my post on the movie here) as the movie moves into "uh-oh, we have a problem" to carry the story forward by the 30 minute mark.  How people actually enjoyed the park or why it was attractive wasn't really a consideration.

The other thing that intrigued me was that, especially in the first third of the season, the show seemed to be about writers writing about writing, which seems boring or maybe a little tedious, but it's wrapped up in how the creator - with total management of a person - will choose to injure that person, to hurt them over and over.  In a park where any injury to one of these robots can occur free of consequence to the perpetrator, when the robots can respond in sentences that come from whom the character is, who seem to live in a twilight zone between machine mimicking decisions and thoughts and something that is autonomous enough to live it's days without direct management by an operator, wandering through stories developed by a writer...  it's something I found fascinating.  After all, every writer has to think of what their characters will do or say when put into a situation, wear the roles of everyone in the room, and we recognize fiction as the artifice it is when those motivations, those drives, don't ring true.  That's at stake in every character and interaction in the park at Westworld.

The story is, of course, not actually about these things, and by the back half and into the finale, it's bypassed this sort of thing to talk about the nature of consciousness, what a living mind is and is not, when the machine becomes a truly independent operator (or how much self-destination each of us actually holds within versus responding to unconscious impulses).

I am sure had I enjoyed or done better in philosophy classes or in psych classes, I might have more to say on the nature of consciousness, and who said what on the subject, but I was too busy taking "Age of the Dinosaurs" and whatnot.*

The problem with the internet, of course, is that I visit a lot of sights on the Venn Diagram with people who want to read and write about the latest on TV, and they aren't shy about putting both spoilers and "fan theories" in the headlines.  And while I'm quick to dismiss or ignore most of these sorts of things, I accidentally saw one headline (just one!) that put an idea in my head, and within two episodes I felt they were correct, and, indeed they were.  And it kind of spoiled some of the show for me.  I sincerely doubt it's something I would have come to on my own until about the eighth episode.

Anyway, knowing "The Man in Black" was William made some of what was going on easier to deal with as the show hopped between characters/ past and present, but it also drug out the Dolores storyline a bit more than intended.

The switch from "is this writers writing about writing characters?" to "exploring the concept of consciousness and what that means within machines" is one I'm more than happy to make alongside a show.  I actually consider this a very real ethical problem,** and as humanity brings online greater and greater artificial minds, we will need to cope both with what we're asking of these machines as they gain more and more will, and what we want these machines to do.  Murdering something with a sense of self-preservation and self-itself for sport may not be entirely "ethical".

Overall, I enjoyed the show.  My only concrete disappointment was in making Bernard also a robot (but sweet relief that the show didn't reveal in the final episode that all the humans were robots, which was what I was side-eyeing it for from episode 1), but that's a story-telling choice and, in the end, I think they made it worth it despite the Bernard/ Arnold reveal creating the most tortured element of the plot as no one knows he looks like Arnold.

In the end, I did find the Dolores satisfying, overall, and the Maeve storyline better than it needed to be, and maybe the most melodramatic, but one I'm happy to see follow up in a second season.

It's also one of the very few shows that has made me actually curious to watch the whole season over again, in part because it had moments I dismissed a bit, but in the end actually worked pretty well as part of the whole.  Whether it will bear up under a repeat viewing is an open question that will wait until I've got a day to kill.

Anyway, it's a bit difficult to write up an entire show of about 11 hours, so I won't try.  But despite some grave concerns even just before the finale, I think it did what it set out to do as well as one would hope.  We can save chit-chat about the actors, characters, the finances it would take to run this sort of operation, etc... for another day.


*make fun, but I delivered a short lecture at work this week about the changing pelvises of reptiles to dinosaurs to birds and why that's important in understanding branches on the cladiogram