Christmas Watch: The Shop Around the Corner (1940) 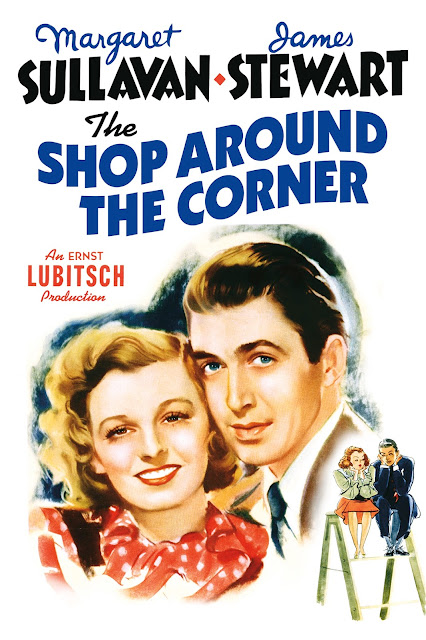 No lie, Jimmy Stewart is one of my favorite actors of all time.  I've thought the guy was brilliant since high school when I caught Harvey on VHS.  The Shop Around the Corner (1940) is a bit of pre-war brilliance on Stewart's part, working from a pretty great script under a renowned director and with an excellent cast working as a team.

It's true the movie is steeped in social constructs of the early 20th Century, and so may be dated in too many ways for many viewers, but I tend to think the conflicts and humor of the movie transcends those qualities.  It's not a sweeping, amazing movie, but it is a good movie for putting on during the Yuletide Season for you and your sweet woogums.
Set in Budapest (one assumes well before Hitler was causing a ruckus in the general vicinity), Stewart plays a lead salesman in a small department store, a young man who has spent his life to date working under Mr. Matuschek (Frank Morgan!), who is a shop keeper who is a whole lot how you'd expect Frank Morgan to be as a shopkeeper.

Stewart has been corresponding with an unknown woman via an ad in the paper, discussing books, art, politics... and he feels he's really found someone special.  But as a clerk in a store, he may not have much to offer.  At the same time, a young woman comes into the store asking for a job (Margaret Sullavan), and somewhat connives her way into a position in the store.

Of course, yes, it turns out Sullavan is the woman Stewart has been corresponding with (if the trope were ever fresh, it is not by 2016), which Stewart discovers but Sullavan does not.  Really, one of the more interesting bits about the movie is that it's not playing the male for a dope who can't keep up with the female protagonist.  And, in fact, allows Sullavan to keep digging her own grave.  I'm sure someone, somewhere, would point at the movie and call "misogyny", but the trope is reversed so often, despite the vintage on the movie, it's almost refreshing to not see male character the one with the upperhand for once.

It's a charming, small Christmas story, and even though it touches on some darker angles (there's some offscreen infidelity that causes some problems for the characters), it's nothing some Christmas Eve snow can't freshen up.

Margaret Sullavan isn't exactly a household name, and she has very few credits.  While she's a strong actress, the part is a bit thankless.  She has to play a character who is both utterly pretentious while also trying to make her charming, and it's on Stewart to sell that he sees the magic underneath the condescending exterior (you'll all have known this person back in your early 20's).

There are great character bits for William Tracy as the hustler young errand boy and Joseph Schildkraut as the slick, untrustworthy salesman.  And, you can't not like Felix Bressart as the older salesman who is just trying to keep his head down and get back to his family every night.

I haven't seen many films by Ernst Lubitsch (Ninotchka being the only other one that springs to mind), but that's what's kind of interesting about having a Vulcan Video available to me again.  When people say "why would you go to a video store in 2016?" - well, (a) I can only find what I'm looking for on Amazon or Netflix streaming about 65% of the time - they don't serve older movies terribly well, and (b) my Vulcan had this movie in their "Directors" section under Lubitsch.  That's some old school Austin 90's film dork stuff right there, and I really miss the helping hand I felt I was getting at Vulcan and I Luv Video just by virtue of their curation.